Hastings College of the Law, which has often been at odds with the city, filed a federal lawsuit yesterday claiming that failures in city policy have left the Tenderloin neighborhood in such “deplorable conditions” that they violate the civil rights of people living and working there.

Two residents of the neighborhood and a group of merchants are also involved in the lawsuit, but Hastings clearly has the resources to be driving it.

The school, part of the University of California system, has in the past angered local officials with its sometimes heavy-handed approach to development.

Now, it’s turning to the courts to address a fundamental public-policy failure in San Francisco – and arguing in part that the conditions in the Tenderloin are driving away potential law students.

Five other plaintiffs are named in the suit, including the manager of an SRO hotel, the part owner of a café on McAllister street, the Tenderloin Merchant and Property Owners association, and two residents of the neighborhood, one of whom is dependent on a wheelchair.

The central claims revolve around what the lawsuit calls

The Tenderloin, always a community of tolerance and compassion, is now blighted; its sidewalks are unsanitary, unsafe, and often impassable. Open-air drug sales and other criminal activity, plus crowds of drug users and sidewalk-blocking tents, pervade and threaten the health and lives of all of the Tenderloin’s residents. What has long been suffered in the Tenderloin has become insufferable. The conditions now prevailing in the Tenderloin constitute a violation of the fundamental civil rights of those residing and working there.

None of which is news to the people who live and work in the area.

The Mayor, the Emergency Operations Center, Department of Public Health and various city departments have failed Tenderloin residents during this pandemic.

There’s a humanitarian and public heath crisis in this neighborhood. Ifs terrifyingly obvious to anyone who lives here, works here, or passes through. It’s dangerous, unhealthy and deeply immoral. Thousands of people still unable to safely shelter in place or walk down the street safely in the middle of a plague.

We sent a letter weeks ago demanding many of the same things that UC Hastings is calling for, they actually signed the letter. I’ve introduced emergency legislation on most of these issues. We want hotel rooms, bathrooms, water, PPE, field testing, closed streets, safe camping areas, and an effective response to the drug situation. Those are solutions residents here are united behind.

I saw that the Mayor dismissed it and said that folks should work with the city instead. Residents, organizations, businesses have been working to address these issues for months and years before this crisis, and haven’t been getting anywhere. So things escalate, it’s to be expected.

Mayor Breed, on the other hand, is just annoyed: 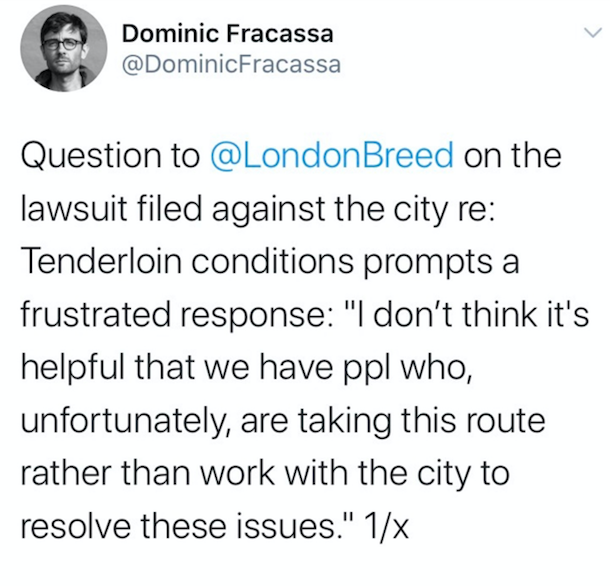 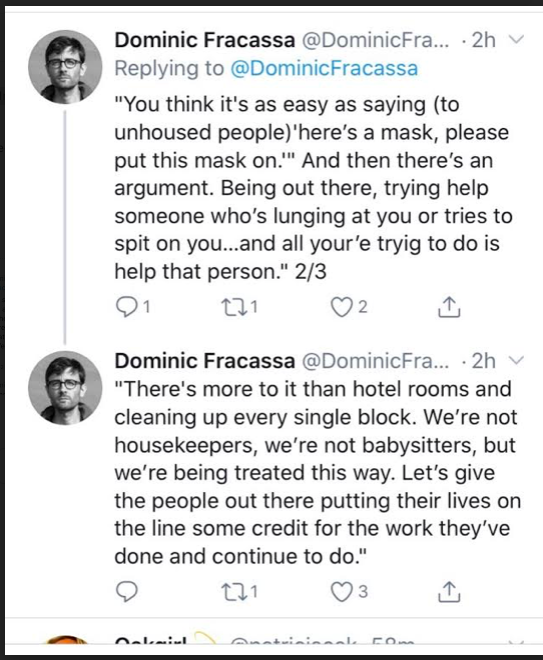 And John Cote, a spokesperson for the the City Attorney’s Office, told me:

The City Attorney’s Office will evaluate the lawsuit once we have been served with it. The City’s Emergency Operations Center has developed a detailed draft plan to address the situation in the Tenderloin, including block-by-block analysis. The City is gathering community feedback on the plan May 4.  It is unfortunate that UC Hastings chose to go to court rather than allow that community process to proceed and produce a final plan, which will be issued this week.  The Emergency Operations Center will continue to finalize the plan, and we invite these plaintiffs to join their neighbors and participate in that process.

But the city’s response has been slow and frustrating. “And they wonder why we question how committed they are to getting people in hotels,” Haney said.

The suit seeks no financial damages, but it does state that the city needs to provide adequate, safe, shelter for people on the streets, particularly during the pandemic:

Basic shelter is “medically necessary” because it is “reasonable and necessary to protect life, to prevent significant illness or significant disability, or to alleviate severe pain,” and the City’s failure to provide the same to its homeless population constitutes a breach of its duty under Cal. Welf. & Inst. Code §§ 17000 & 10000.

So now the Breed Administration is under pressure not just from residents and the supervisors but potentially the federal courts. But the only real solution here, the only thing a judge could do that would make a difference, is to order the city to secure enough hotel rooms for all of the homeless people who are now camping on the streets.

And the administration has made clear it has no interest in doing that.

Would a federal judge make that clear an order? And if so, would the mayor spend the money and follow it?

And would that order apply to other Bay Area cities and counties?

Or would a judge more likely order the city to “take immediate steps” to resolve the situation, which the mayor and the city attorney will say they are already doing?

I look forward to the hearing on this one.