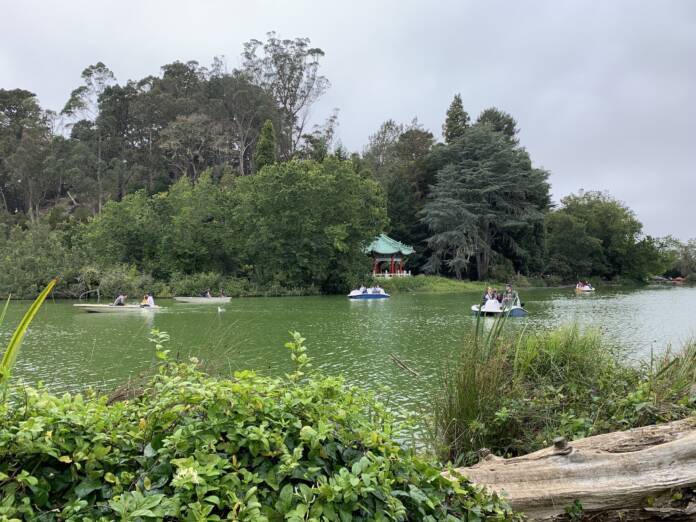 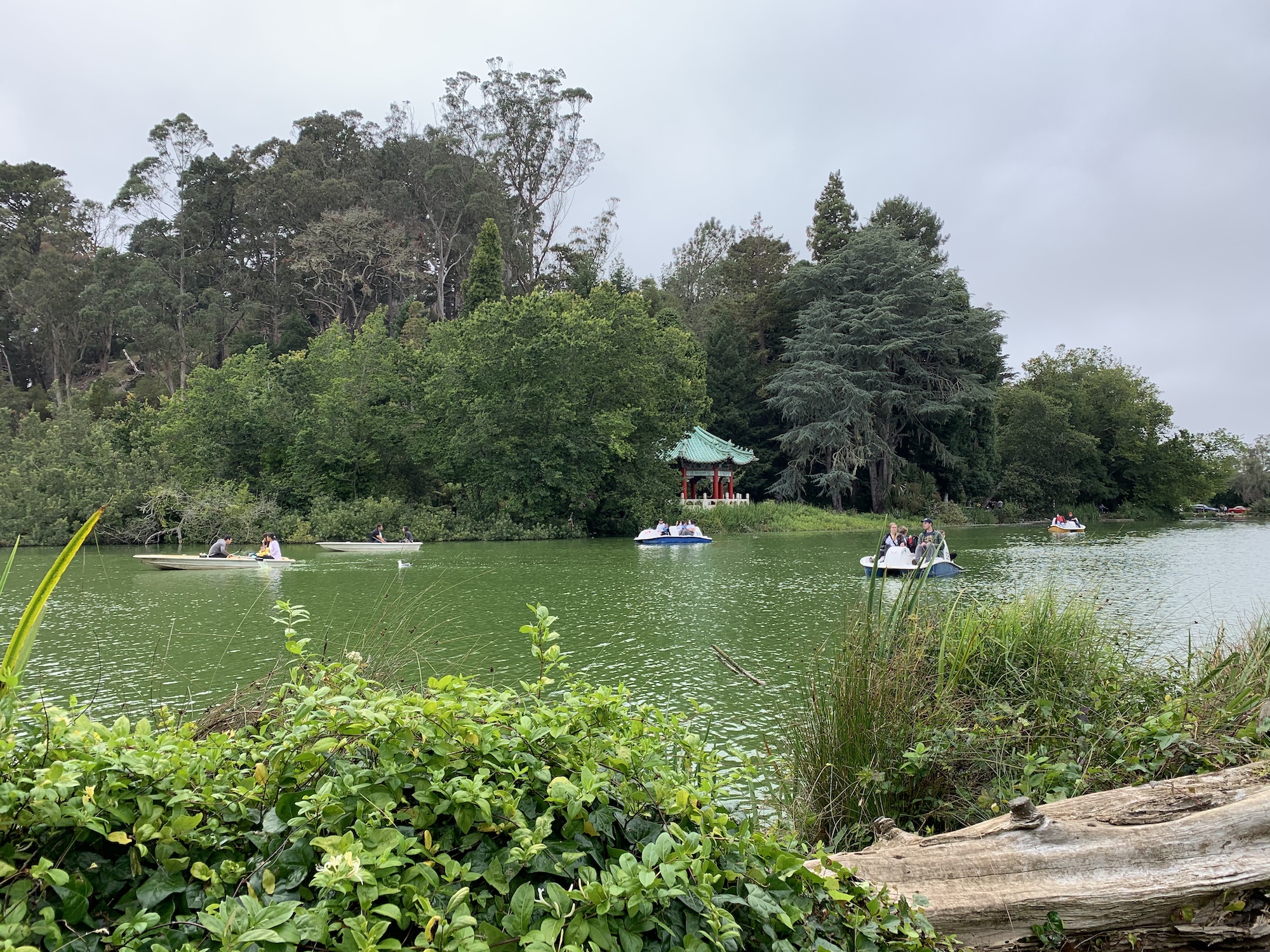 A distant encounter with fiery energy in the pagoda.

However it happened, you’re now taking a welcome two-hour walk through Golden Gate Park in the fog of July: panting slightly into your repurposed snood or punk-show bandana, dodging joggers and speeding bicyclists, counting feet from the person behind you, swerving gently across a blessedly car-free JFK Drive.

You thought about arranging one of those blanket-distance playdates with some of your phantom-like friends, but outside of Zoom call reminders the pandemic has decimated your scheduling neurons: plans melt right into gray air, more than the San Francisco usual.

Sure seemed like things were getting better for a minute there! Ah, but here we are. You’re even thinking in tweets at this point. nooo don’t wear the mask under ur nose ur so cute ahaha. The whole thing sucks. You’re all for revolution, but this America joint is looking like a death trap.

How about grabbing a little green bench at Stow Lake? This is the farthest you’ve consecutively walked in several moons. You sit at one far end of the bench, in case someone wants to take a load off, too. You ponder the physics of eating a hot dog from the nearby Annie’s vendor through your mask. Oh, they’re renting out paddle boats on the lake, again. That’s probably safe. Why do you remember these being swan-shaped?

Then: You spot them, across the water on the island. Two brisk shapes whirling through the crimson pillars of the Chinese Pavilion, beneath its upturned verdigris eaves, which glow like a radioactive artichoke against the dull greenery. Open position, shadow position, rhumba walk, triple-twirl, quick whisk, promenade. Both maskless, one in a strappy little cocktail dress, the other in tight gray sweats. She spins him round, he spins her back, then triple-step into a bow-tie, turn, double-handhold, hammerlock.

You burst into tears. It’s been so long since you’ve seen live dancing—or any entertainment—unmediated by a box in a screen in your hand that you forgot there’s an emotional response to the immediacy of living things. Who is this unfettered duo, gliding silently through the pagoda, alone on the island (you can forgive the lack of masks). What are they practicing for? You’re so enraptured you fail to realize they’re on rollerblades til later. Let them stay anonymous sylphs sent from the before-time, tracing familiar patterns on your retinas. Impromptu perfection.

It’s not like the world has been lacking for motion, despite almost everything being frozen. Protests roil. Markets convulse. Karens contort. Authorities charge. Empire collapses. Someone lobs a tear-gas canister back at the Feds with a lacrosse stick! Stuck in your bedroom, the world crashes down around your ears. You burrow further into your ratty comforter. Choreography plays a vital role in protest, and, lately, protest in choreography, but even the most anarchic dance-maker would have trouble nailing Paroxysm 2020. Just try this, Liz Aggiss.

Better it be something like these two, sailing unencumbered through it all, wrapping us up in a better moment. Tradition, as such, bolstered by bravado. But also quick change and sidestep, giving us a contemporary ballroom feel, pairing Afro-Cuban moves with Viennese waltz forms, cha-cha alongside chassé.

When will we see live shows again, in person, on purpose? There are bills before Congress to help save our performance spaces, pummeled by COVID and landlords and the total failure of the United States to do this one necessary thing, i.e. keep us alive. Arts nonprofits may move into storefronts soon. Maybe more funds to help will spring up. Maybe the government will do something. Maybe the intransigent tech overlords will. Maybe we’ll help ourselves. Pull down the statues and put dancers atop the pedestals. Block off the streets for distant performances. Freeze all the rents. Defund the police and give artists all the money. Who knows.

The dancers flag, laughing, after 20 minutes of scandalous public joy. They fall into each other’s arms. A duck on the lake quacks. You get up to begin your walk home, where acres of unwashed dishes await. But now you take your sweet time, why not. One foot in front of the other.