By Tim Redmond
August 19, 2014
Share on FacebookShare on TwitterShare on LinkedInShare on RedditShare on Email 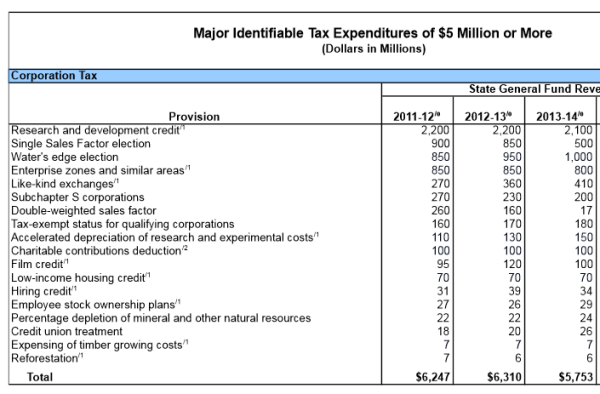 AUGUST 19, 2014 — State Senator Mark Leno’s got a bill that would ensure all new tax breaks come with a profit-and-loss analysis. It’s a common-sense idea: If we give businesses a tax break to encourage hiring, we should be sure that the money the state is giving away will actually translate into new jobs. And we should check back every once in a while to see if it worked – or if it’s just a giveaway of taxpayer dollars with no measurable impact.

SB 1335 is headed to the governor’s desk, and if Jerry Brown, who constantly talks about protecting the taxpayer dollar, doesn’t sign this, then something’s very wrong.

What caught my eye, though, was a stunning number that mentioned in the press release I got from Leno’s office: Through tax breaks, California loses $47 billion a year that it would otherwise collect. That’s nearly half the state’s entire budget.

The number comes from a report generated by the Department of Finance every year that I imagine hardly anyone reads. Leno’s press person, Ali Bay, sent me a link. You can check it out here.

There are charts and lists of every single significant tax break that state allows. Some are pretty predictable and probably not controversial: The law that exempts employer contributions to health plans from state income taxes costs $5.5 billion. The exemption of mortgage interest costs $4.6 billion. I don’t imagine anyone’s going to try to do away with those (although the renters’ tax credit is only worth $100 million, meaning renters get a tiny fraction of the benefits that property owners get.)

Some of these tax breaks help wealthier people; some help ordinary workers.

But one of the charts shows the tax breaks that are entirely aimed at businesses – and some of them are expensive and probably fit well into Leno’s category of giveaways that may not be doing the state as a whole much good.

The Research and Development Tax Credit will cost the state $2.1 billion in 2014. Does this actually encourage R&D – or does it let companies get tax breaks for doing work they would do anyway?

Enterprise zones are worth $800 million – and it’s questionable at best if they create any new jobs or economic activity.

S corporations that pass through their earning to individual shareholders pay almost no state income tax; that costs $200 million.

Add this all up and we’re talking real money — $5.7 billion a year in corporate tax breaks.

Are Californians better off because of this? Would collecting that tax money have a net positive impact on the economy (either because the great mass of working taxpayers in the state would have less of a burden or because that money was reinvested in, say, education)?

It is, at least, a question worth asking. Because the state gives away a whole lot of money with very little justification.