Debunking the myth of the poor landlord 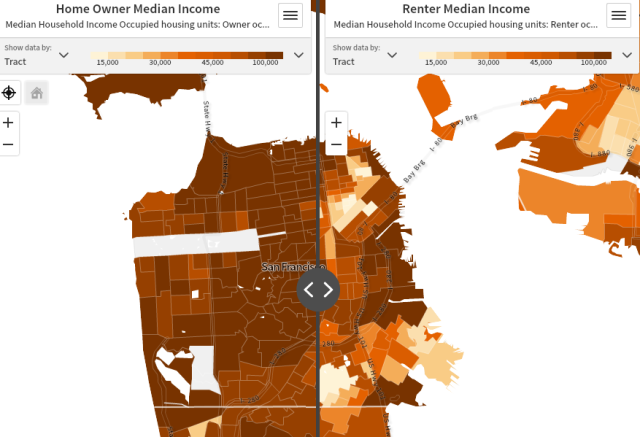 DECEMBER 30, 2014 – If you haven’t heard the one about the poor struggling landlord who has a millionaire tenant with a cheap rent-controlled apartment, then you’re not reading the comments section on 48hills. We are reminded constantly about this sad soul who suffers from the horrors of rent regulation.

But it turns out, as many of us pretty much knew, that this character, like Santa Claus, the Easter Bunny, the 100th Monkey Phenomenon and Spontaneous Human Combustion, is largely a myth.

Yeah, you can always find a counter-example. There are, I suppose, Magic Bullets, and there are probably landlords in San Francisco who make less money than their tenants. Ronald Reagan found a “welfare queen” who had a Cadillac. But they are very much the exception and not the rule.

That’s the conclusion of a new study by the Anti-Eviction Mapping Project, which compares the median income of renters and property owners by census tract in San Francisco.

Let’s move to the Mission, where there are increasingly wealthy renters. Median income for tenants? About $80,000. For landlords? About $154,000.

There are places where it’s close – one Castro/Upper Market district had property owners at $119,000 and renters at $103,000. I found exactly two tracts where the pattern was reversed, one in Portola and one around the Presidio; in those cases, tenants made just a little more than property owners.

But in the rest of the city? Rich areas, poor areas, areas with gentrification, areas with more stability … it’s all the same. People who own property have more money than people who rent.

Now: Median income is of course an imperfect metric. There could be tenants who inherited vast wealth, or made it on their own, who are now retired from working and have lower incomes. There could be landlords who work all the time but have massive debts. There’s always a welfare queen somewhere.

But if we learned anything from the Reagan Era, it’s that you don’t make public policy on the basis of one example. You have to look at the overall data, which shows that most people on welfare are really struggling to get by and don’t own multiple Cadillacs – and most landlords have a lot more money than most tenants.

Rent control makes it possible for people to establish lives and raise families and stay in this city, even as economic changes that have nothing to do with them ravage the affordable housing stock. It keeps the city vibrant and diverse.

And overall, if there’s an impact on wealth, it’s a shift from those who have more to those who have less. Which this country believed in, once upon a time.