‘A water company that skims oil’

Who’s watching to make sure that Chevron oil-field wastewater is safe to use for irrigating crops?

EDITOR’S NOTE: As we reported earlier this month, it’s an open secret that Chevron is selling oil production wastewater to corporate farmers in Kern County. That water is used to irrigate crops such as almonds, oranges, potatoes, wheat and many more common foods – food that may be on your dinner plate tonight.

Meanwhile, state regulators who are responsible for insuring the safety of our water supply are in the midst of a scandal, having allowed California oil companies, particularly in Kern County, to inject oil production wastewater –“a blend of briny water, hydrocarbons and trace chemicals” – into federally-protected groundwater aquifers that contained water that had been clean enough to drink. Here’s Part Two of our report from the Central Valley oil fields.

“There were over 3.5 billion barrels initially in this field, and 2 billion barrels have been produced over the last 100 years,” Jeff Hatlen, a senior petroleum engineer for Chevron, says in a Chevron-produced video.

“The oil’s thick and viscous. Think molasses,” Hatlen continues. “To get more out of it out of the ground, we needed a new technology. That became steam flooding. So we’ve just generated steam in a cogeneration plant. We bring it through pipelines. The steam runs through the ground, heats up the oil, heats up the water, and then brings it to our wells that lift it up from 1,000 feet – nine thousand of these wells, over 20 square miles. For every barrel of oil, we’re lifting 10 barrels of water.”

“Think of Chevron at Kern River as a water company that skims oil,” says Jim Waldron, a Chevron hydrogeologist.

The state agency responsible for overseeing Chevron’s oil production wastewater “recycling” program is the Central Valley Regional Water Quality Control Board. I talked to Clay Rodgers, the assistant executive officer in charge of the Fresno office. He told me that the water from the Kern River oil field is “fairly good quality” and would that it would be a shame to waste it.

I asked Rodgers who monitors the water quality of the water Chevron delivers to the Cawelo Water District. He answered that Chevron does the monitoring, and provides reports under penalty of perjury. He said he can’t remember there ever being any problems. He added that the water board “occasionally” gets its own samples, but “I can’t tell you the last time we did this.”

State regulators responsible for insuring the safety of our water supply are not looking too good these days. Following the recent story by the San Francisco Chronicle about state regulators allowing oil companies to inject dirty oil production wastewater into federally protected groundwater aquifers, Associated Press expanded on this scandal with a new report.

According to Associated Press, “Regulators in California… have authorized oil companies to inject production fluids and waste into what are now federally protected aquifers more than 2,500 times, risking contamination of underground water supplies that could be used for drinking water or irrigation.”

Even more damning, Associated Press reports that “nearly half of those injection wells… were permitted or began injection in the last four years under Gov. Jerry Brown, who has pushed state oil and gas regulators to speed up the permitting process.”

“We don’t know how this got approved,” said Jason Marshall, the deputy director of the California Department of Conservation, according to Associated Press.

The oil production wastewater that Chevron delivers to the Cawelo Water district comes from wells that have been “steam flooded.” Steam flooding does not involve adding any chemicals to the water or the oil wells, at least according to Chevron.

But a more controversial method of oil production that does involve chemicals has been much in use in recent years, including Kern County, and wastewater from these wells have presumably been part of the wastewater that was illegally injected into federally-protected aquifers.

That method is called “fracking.”

Fracking is a relatively new way of getting at oil and gas that is trapped in shale rock, and would otherwise be impossible to get out of the ground. Frackers inject fracking fluid – a combination of water, sand, and a large variety of chemicals – into oil wells at very high pressures. That breaks open the shale rock and releases the trapped oil and gas.

Fracking fluid can include hundreds of chemicals, many of them toxic. But the oil companies rarely have to disclose what chemicals they use, because this information has been considered a “trade secret.” Recent state legislation now requires public disclosure of the chemicals being put into fracking fluid, but so far lax state enforcement has rendered this new law close to meaningless.

Some chemicals that have shown up in studies of fracking fluids include sulfuric acid, hydrochloric acid, formaldehyde, methanol, ammonia, naphthalene, benzene, toluene, xylene, and even diesel fuel, among many others. Some claim to have found lead, mercury and uranium in the mix.

There is a growing movement in opposition to fracking. Just last Saturday, February 7, thousands of protesters gathered in Oakland under the banner of the March for Real Climate Leadership. Opponents of fracking fear that the process contaminates our water, land and air, and that the increased production of oil that fracking is bringing about will worsen global warming and all the risks attendant to continued reliance on fossil fuels.

The movement against fracking has had some notable successes. New York State and Vermont have banned the process. In California, San Benito, Monterey and Santa Cruz counties – a block of counties to the northwest of Kern County – have banned fracking. The Los Angeles City Council has tentatively approved a moratorium on fracking, but is still working on implementing legislation. Beverly Hills bans fracking. Butte County in the north and La Habra Heights in the Southland have scheduled votes on a ban. Food and Water Watch counts over 450 communities that have banned fracking.

Fracking fluid in the water?

Chevron says that the water it delivers to the Cawelo Water District does not including fracking fluid. There is reason to believe this claim, given that the Kern River oil field historically has not included wells drilled into the shale rock that gets oil companies fracking.

But it is notable that the increased use of Kern River oil production wastewater coincides with increased fracking in parts of Kern County.

I asked Rodgers from the Central Valley Regional Water Quality Control Board if there might be fracking fluid in the wastewater delivered to the Cawelo Water District. He answered that there was no fracking fluid in the wastewater “to our knowledge.” He said this is because the board is “unaware” of any fracking in the Kern River oil field. However, he added, if regulators became aware of any fracking in that area, his “answer might be a little different.”

I also asked Rodgers about the wastewater injection scandal. He was at pains to point out that the injection program is not overseen by the water board, but by the California Department of Conservation, specifically its Division of Oil, Gas and Geothermal Resources. He said that the water board had not had concerns about the injection program “historically,” but that when the scandal began coming into public view last spring “we became a little more concerned.”

I posed the same question about fracking fluid to Steven Bohlen, the head of DOGGR. Gov. Brown appointed Bohlen to lead the division last June.

Bohlen told me that “Given the location, it’s very unlikely wells were hydraulically fractured in this area. We would need to know the wells from whence the water came to be certain. The Regional Water Quality Control Board would certainly know about the water quality and quality assurance in the Cawelo Water District.”

It seems a little contradictory that Bohlen would take a swipe at regulators in other states, while in the midst of the oil production wastewater injection scandal here in California. But then, according to Associated Press, he has minimized this scandal and remains “determined to both ‘manage the transition’ back into compliance with federal law and to ‘maintain a robust oil industry.’ ”

I also posed the question about fracking fluid in the Cawelo Water District irrigation water to California Secretary for Natural Resources John Laird, who was appointed to this position by Brown in 2011. Laird was an elected politician in Santa Cruz and the state Legislature for many years, and has a relatively progressive reputation. I also knew Laird a bit years ago when we both attended the University of California at Santa Cruz.

I emailed Laird and then talked to his staff. His staff promised that he would get back to me soon. That was mid-January. I have not heard from Laird or his staff since then.

The reader will be forgiven if you conclude that the responses I got from Rodgers, Bohlen and Laird seem designed more to provide plausible deniability of any problems, rather than being indicative of a real effort to insure that the water Chevron supplies to the Cawelo Water District is safe.

Another trip to Kern County

Last week I drove to Los Angeles to see my 98-year-young father, who just got out of the hospital after a bout with pneumonia. He is recovering well at home, thank you.

On the way home, I decided to scoot up Highway 99 and take a look around Chevron’s Kern River oil field. There are a lot of oil wells there:

While snooping around, I discovered a reservoir that Chevron uses for its oil production wastewater business, located just southwest of the intersection of Lerdo Highway and Highway 65: 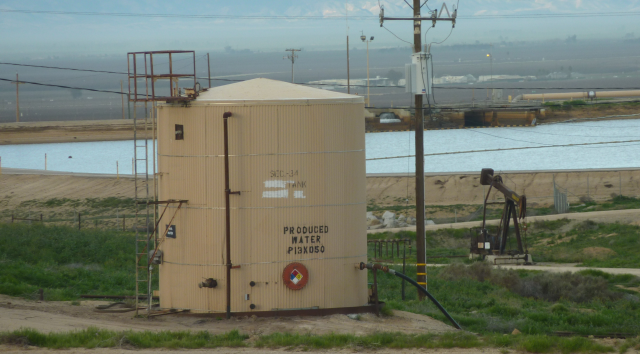 I would have liked to get a more close-up photo, but circumstances did not permit that.

I did, however, find a canal that runs off to the north containing water from this facility. This canal runs alongside a dirt road that leads to the Camp Hamilton Veteran’s Memorial Park (which is a story by itself for another time), and just to the east of the Kern County Juvenile Treatment Facility and the Kern County Sheriff Lerdo Detention Facilities.

Here is the canal: 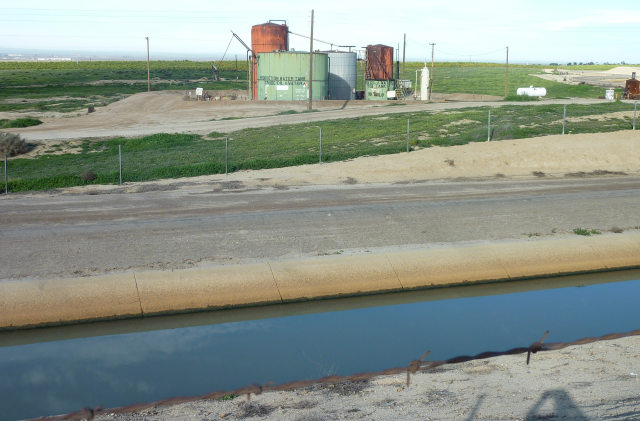 I can report that the water in the canal is quite warm, about the temperature of a warm bath. But I would not advise bathing in this water, since it’s so murky that you cannot see even an inch past the surface.