More
UncategorizedOn St. Patrick's Day, a film about the Troubles

On St. Patrick’s Day, a film about the Troubles 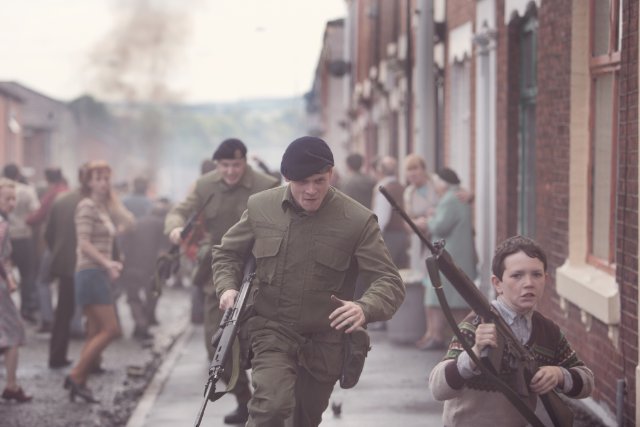 MARCH 17, 2015 — I have learned over the years that when Mick LaSalle, the San Francisco Chronicle movie critic, trashes a political movie, it is as likely as not for its politics, rather than for its cinematic quality.  Such is the case with his Friday, March 13 review of ’71.

’71 is the story of a young British soldier named Gary Hook, played by Jack O’Connell, thrown into the Irish insurgency against colonial occupation in the early 1970s.  The movie grabs you right from the beginning shots of the Brits’ training, reminiscent of Oliver Stone’s Platoon.  It doesn’t let go or let up for an instant. The film’s point-of-view is summed up midway through the action when a former army medic tells the wounded Hook, “They don’t care about you, to them, you are just a piece of meat.”

To critic LaSalle, who doesn’t even acknowledge the fact of the British occupation of Ireland, the film is merely a “depressing immersion into Irish history,” and is all about some unexplainable conflict between Catholics and Protestants.

Yet the early scenes of mass opposition to the British soldiery clearly set the stage.  Few films can match the realism that director Yann Demange creates in these shots – from the kids throwing rocks at the soldiers, the women banging trash can lids on the ground as the soldiers enter the insurgent neighborhood, the resulting in-your-face confrontation between the soldiers and an outraged Irish crowd, to the shot that kills Hook’s partner and puts him on the run.

The dramatic arc of the movie has Hook, separated from his unit, trying to reach the safety of his barracks, while being pursued by a unit of the Irish Republican Army.  Along the way he encounters a mix of people, including Protestant loyalists and Catholics sympathetic to his plight.

Unknown to Hook, he finds himself caught up in a conflict between the old-guard IRA leadership and a younger group eager to use their guns. We also witness divisions within the British occupying forces, particularly between the army and a group of plainclothes counter-intelligence agents.

Perhaps most telling, the film convincingly portrays the attempts by the British counter-intelligence agents to fan the flames of division within the IRA, in order to divide the rebels and conquer the insurgency.  Note that this is 1971, when the same kind of brutal counter-intelligence tactics were being employed in the US by J. Edgar Hoover’s FBI, a program that became known to the public as COINTELPRO.

But to LaSalle, “the movie is all about a guy trying to be inconspicuous in Army boots.”  LaSalle’s zingers include the comment that “Calling a taxi is out of the question.” Apparently LaSalle has Belfast confused with New York.

LaSalle also complains about a scene where “a bomb goes off in a public place” – a Protestant loyalist bar – “but it’s not completely clear who put it there.” Despite some deliberate ambiguity, it is manifestly clear that the explosion was not the work of the IRA, a point that is lost on LaSalle. “It’s not even 100 percent clear who gets blown up,” says LaSalle, despite an extended scene of Hook trying to rescue a young Protestant kid severely wounded in the explosion, a kid who had tried to rescue Hook from his IRA pursuers.

The film does not end with the resolution of Hook’s flight in Belfast, but back in Britain, where the “Troubles” in Ireland really began.  LaSalle ends his review with the suggestion that “one could go an entire lifetime” without ever “being in the mood” to see this film.

’71 is not for the faint of heart.  But for those who want to see a genuine and dramatic portrayal of the consequences of British colonialism in the modern era, one would be hard put to do better.

The film is currently scheduled to end its short run in San Francisco today, ironically St. Patrick’s Day. It will be gone from the Bay Area after Thursday. Unfortunately, LaSalle will still be writing snotty movie reviews for a long time to come.

If Gavin Newsom had shown some leadership, the terror that patients face could have been avoided.
Read more
City Hall

This old story is back, and it's still wrong: There are real, serious issues between the progressives and the corporate power structure
Read more
The Agenda

Plus: Housing nonsense in the Tenderloin, a Berniecrats art show—and who will replace Nancy Pelosi? That's The Agenda for Aug. 15-21
Read more
Sponsored link