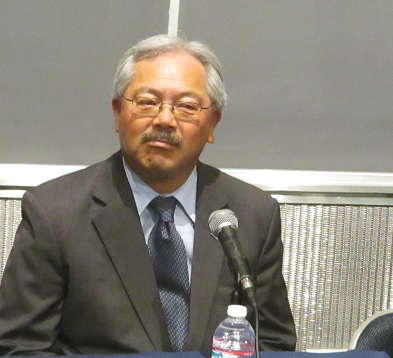 What did the mayor know?

And when did he know it? That's the lingering question from the corruption charges

The follow-up question to the felony charges against three people for illegal fundraising activities is simple, and classic:

What did Mayor Lee know, and when did he know it?

The Examiner has been doing great reporting on this from the start; the best single analysis on last week’s events comes from KQED, which put together all of the existing data in one place.

So here are the facts nobody is disputing:

Jones, who worked for the Human Rights Commission, described herself as a protégé of both Willie Brown and Ed Lee, and when she retired from her $120,000-a-year job, Lee gave her an award. She was one of those, along with Brown, who pushed Lee (her former boss) to go back on his word and run for a full term as mayor.

She also said that

“You got to pay to play here. We got it. We know this. We are the best at this game … better than New York. We do it a little more sophisticated than New Yorkers. We do it without the mafia.”

At some point, the FBI agent who went by the name of “King” forked over $10,000 to Jones and Mohajer, and that money was broken up into $500 chunks and donated to Lee.

That’s clearly the basis of the charges, and nobody disputes that it’s illegal to bundle donations and launder the money to avoid campaign-contribution limits.

Jones discussed breaking up campaign contributions to Lee in an April 17 telephone conversation with “King,” two days after King sent a $5,000 check to Mohajer, according to an FBI transcript. “Ed knows that you gave the $10,000,” Jones allegedly told “King.” And, “He also knows that we had to break the $10,000 up.”

When pressed about that meeting, Lee told the San Francisco Chronicle’s Phil Matier: “I recall a lot of meetings, a lot of people three years ago. I do not recall any specific meetings with folks…Meeting people is one thing, doing something that is inappropriate is completely different, and we have always been very thorough on that.”

So if that’s true, the mayor of San Francisco agreed to meet someone he had never heard of or met, to discuss business opportunities, entirely at the invitation of Jones and Mohajer – and the allegedly illegal campaign contribution that Jones discussed with King on the phone had nothing whatsoever to do with it.

That’s the question: Did the mayor know when he met with “King” that the man had given 20 times the legal amount to his campaign and that the shady operatives (who he somehow trusted to do outreach and be his fundraisers, and trusted enough to set up a meeting at their request) were going to launder that money?

Or was he totally ignorant of the sleaze going on in his campaign?

Neither one looks terribly good.

Vote demonstrates a clear mandate that the Mayor's Office use Prop. I money for social housing.
Read more
Environment

As part of our post-COVID progressive agenda, we will be discussion what climate justice means. It's open to anyone who sends an email to tim@48hills.org
Read more
The Agenda

Plus: more taxpayer dollars for bad cops, and 248 people locked up beyond the legal time for a speedy trial because SF courts are lagging ... that's The Agenda for Nov. 29-Dec. 5
Read more
Sponsored link

SF sold drivers expensive permits, then let Uber and Lyft undermine the industry. Now the permits are worthless—and the city is doing nothing.
Housing

Vote demonstrates a clear mandate that the Mayor's Office use Prop. I money for social housing.
Environment

As part of our post-Covid progressive agenda, we will be discussion what climate justice means. It's open to anyone who sends an email to tim@48hills.org
Opinion

Approving money for social housing is a clear mandate—and the opposition talking points are the same old tired nonsense we have heard before.