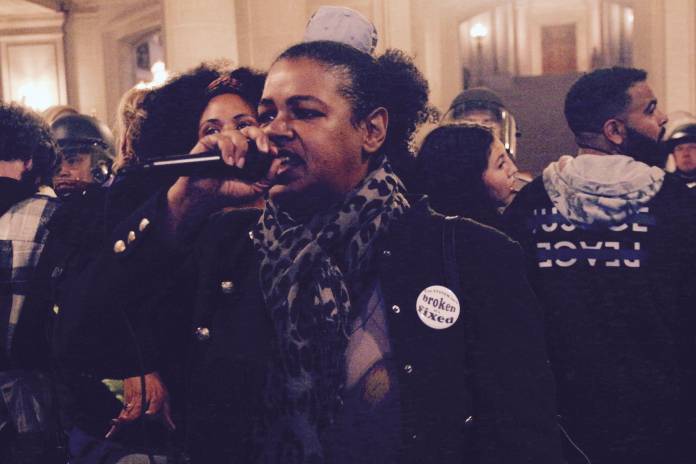 I am sitting here drinking wine and reflecting on the day that was yesterday. I woke up at 6am. My day started with the thought that it is Malcolm X birthday, what does that mean to me? I wasn’t sure.

I checked my email and the first email was from an older white activist who was admonishing me for not organizing around firing chief Suhr the way he thought I should.

Then he told me I didn’t understand the importance of the Black Lives Matter movement and I wasn’t having it. I replied with a “stop appropriating my struggle ” email.

He tried to make me out to be a racist and I called him self-entitled, delusional and told him he had no right to tell me how to feel about my oppression and to stay in his lane.

I thought today was going to be like all the other days: I think about what I need to do to get rid of the chief, I get frustrated that others don’t get the sense of urgency, I lecture a white person on appropriating my struggle and marginalizing my voice, I go to yoga.

I went to yoga and every posture was burdened by potassium-deficient calf cramps.

I got home and jumped in the shower. The minute I began the shower, my phone started blowing up. I toweled off and checked my text messages and voice mails; SFPD had killed someone in Bayview.

I immediately felt rage. I began frantically texting and messaging my network. We had to do something.

I worried about so many things.

Was the victim a person of color? Will the chief explain it away? Will any one be held accountable?

I had heard time and time again that the mayor stood behind the chief. I had heard the chief had no intention of stepping down. I had seen SFPD get away with murder so many times before.

The press began calling and texting one after another asking where the Frisco5 stood.

I had no idea.

I was preparing myself for the next battle in a hundred-year war. But I didn’t have enough ammo. I knew it was a woman who was dead. We always scream about men of color being killed by police. The women are forgotten. The women hit me in a different way. It could have been me. I learned she was only 27. I started to cry. I didn’t know her name, but I cried for her.

I cried because I knew the chief was going to get in front of the press and once again make it the victim’s fault. I cried because the thing valued less than a black man in America is a black woman. I was preparing myself for the rage

The rage of the mayor standing behind a chief that had allowed another murder under his watch.

The rage of a chief who refused to step down.

The rage of another family shattered by police violence.

My only thought was “let’s shut this shit down.”

So as I coordinated with the network to plan action, I got a message saying the mayor was now talking about having no confidence in chief Suhr.

My press contacts at city hall began telling me of a meeting between the chief and the mayor. Could it be? They were hearing whispers.

At 4:38 pm, the mayor announced that he had asked for the chief’s immediate resignation and the chief complied.

As the news spread, my network began celebrating but I could not.

I felt empty and dark. I thought, this doesn’t make a difference. It’s going to happen again because there is no reform and the officers that killed people are still employed by SFPD.

Once again I was juggling press calls. I had to hold back tears. Not tears of joy but tears of: it doesn’t matter. Someone died. Some one’s mother, daughter, maybe even sister. I could not celebrate.

This was not a victory. This was a battle won in a war that isn’t over.

We still have a mayor that has sold SF and traumatized the homeless. We don’t have any real police reform. Those officers are still working and haven’t faced any charges.

So I’m not going to celebrate. I need to prepare for battle.