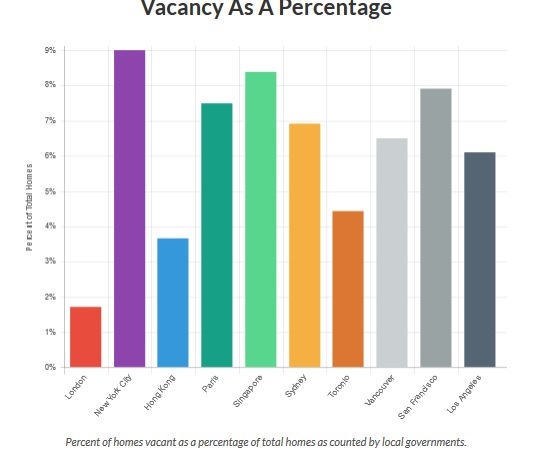 Let us stipulate for a moment that there are reasonable people who have rational disagreements about some local policy issues. We can also agree that housing policy can be complicated, and there is room for debate and compromise.

But there is no credible policy argument I have ever heard in favor of leaving tens of thousands of housing units in the city vacant.

There’s remotely non-lunatic perspective that says the city should allow as many as 30,000 usable apartments to sit empty in a housing crisis.

And yet, we all know it’s happening. Huge numbers of the new condos built in the city are owned by people who don’t live there. It’s not just a San Francisco problem – there are, census data shows, 213,000 empty homes in Los Angeles.

The United Nations has a special report on the problem, looking at how speculative capital has turned housing into such a commodity that vast areas are vacant, unused, with huge implications.

And in Paris, where there are 107,000 vacant homes, the city is doing something about it. The city recently increased its tax on vacant homes to 60 percent of the fair market value of rent.

The Canadian real-estate blog betterdwelling.com has a lovely chart that shows the percentage of the housing stock in every city that’s vacant. And at least in San Francisco (and in many of these other cities) they aren’t vacant and on the market – the official vacancy rate for apartments (that is, the number that are available for rent) is below 3 percent.

Betterdwelling puts the number of vacant units in the city at about 15,000; the Anti-Eviction Mapping Project says it’s twice that.

Let’s think about what Paris did for a second – because at a time when this city needs a lot of new revenue, and the state limits our ability to raise a lot of taxes, a levy on vacant units seems to be perfectly legal.

We’ll start with the Anti-Eviction Mapping Project numbers. Say there are 30,000 vacant units in the city, and we’ll average them out at one-bedroom. Median rent for that apartment is about $3,500 a month in the current market.

But this is a tax like the soda tax: The goal, long term, would not be to bring in revenue but to encourage the owners to put those units on the rental market. I don’t think building luxury condos will bring down housing prices, but suddenly adding 30,000 existing rental units to the market? That’s housing for at least 50,000 people.

There are, as always, imperfections. Some people have vacant units because they are renovating, or because the property is in probate, or there’s a lawsuit, or because a tenant left and they are looking for a new tenant. These are easy to fix: Give a reasonable time for renovations, exempt probate, and don’t start the tax until a unit has been vacant for, say, six months. (There is not a single rental in San Francisco that can’t be filled in six months.)

I wonder if SFBARF and the build, baby, build folks would get behind this idea. Because it’s way, way cheaper than building.

I’m always looking for progressive revenue measures, and a (serious) tax on vacant units seems like a winner. The Parisians are ahead of us.

Then let’s move this a step further and add a (similar) tax on vacant commercial units. Small businesses all over the city are desperate for storefront space – while landlords hold storefronts vacant, hoping the rents will go up.

I have no numbers on this, but the city ought to look into it.

On another note: I don’t know why Randy Shaw decided to pick my neighborhood, Bernal Heights, to attack in his piece arguing for “fair share” policies on Navigation Centers, and I’m not sure why he picked on my friends David Campos, David Talbot and me. But for the record, I am fully in support of the fair-share idea, and I am fully in support of building a Navigation Center in Bernal, and I have made it abundantly clear over many years that I have no interest in promoting policies that increase my property value and have always supported policies that do the opposite. You can criticize me for a lot of things, but this isn’t one of them.

Talbot told me he agrees: “Of course I support a Navigation Center and homeless services in Bernal Heights.”

Campos told me the same; he did, and would, support a center in Bernal — as well as in every other district.

I await Randy’s support for a 60 percent tax on vacant housing units.