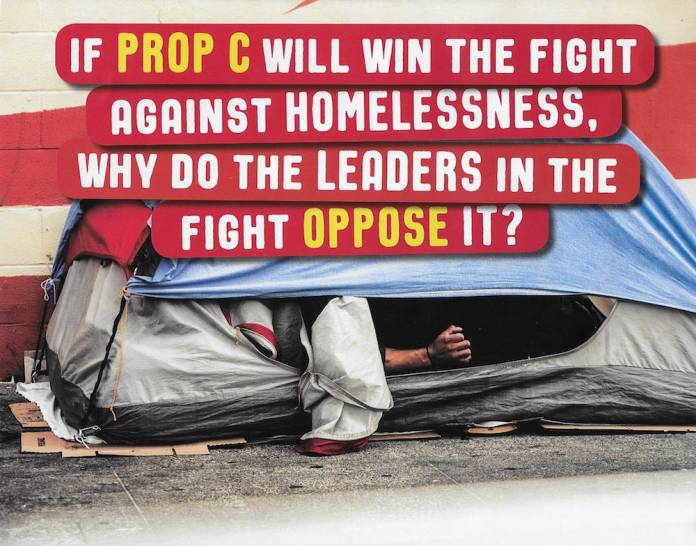 I continue to be boggled by the No on C campaign. I think Joe Eskenazi did a great job explaining the bizarre nature of the messaging: Mayor Breed is saying that her own administration, which would distribute the money, can’t be trusted.

Now, today, I get a mailing that says this: 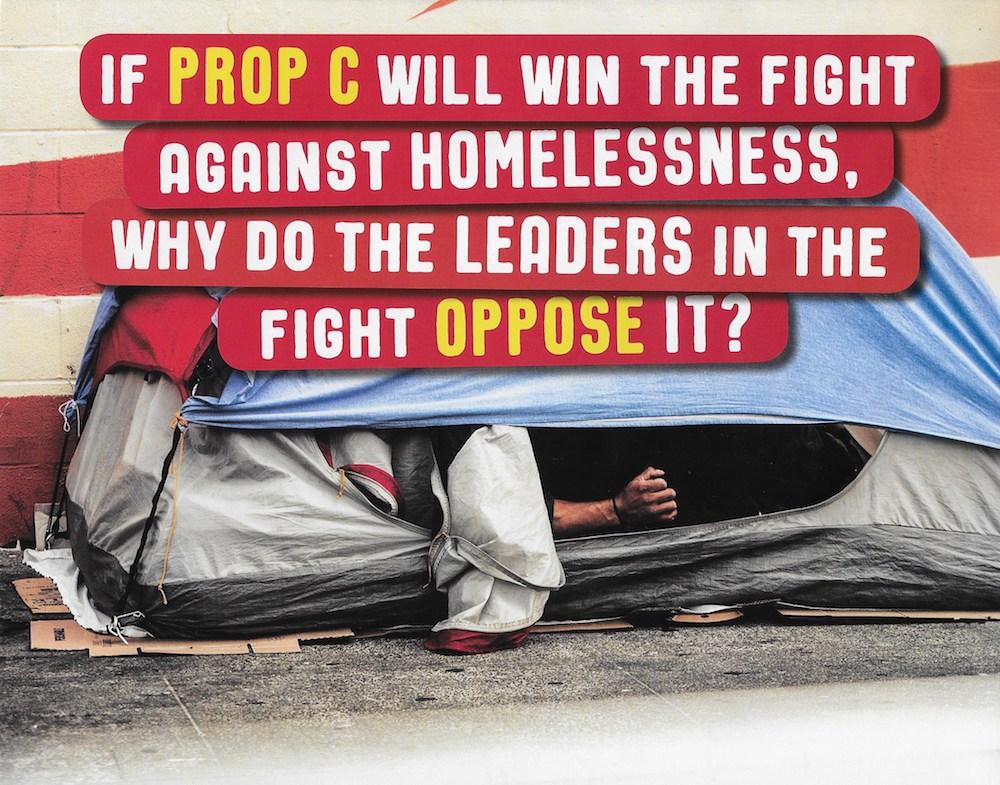 Open it up and you see this: 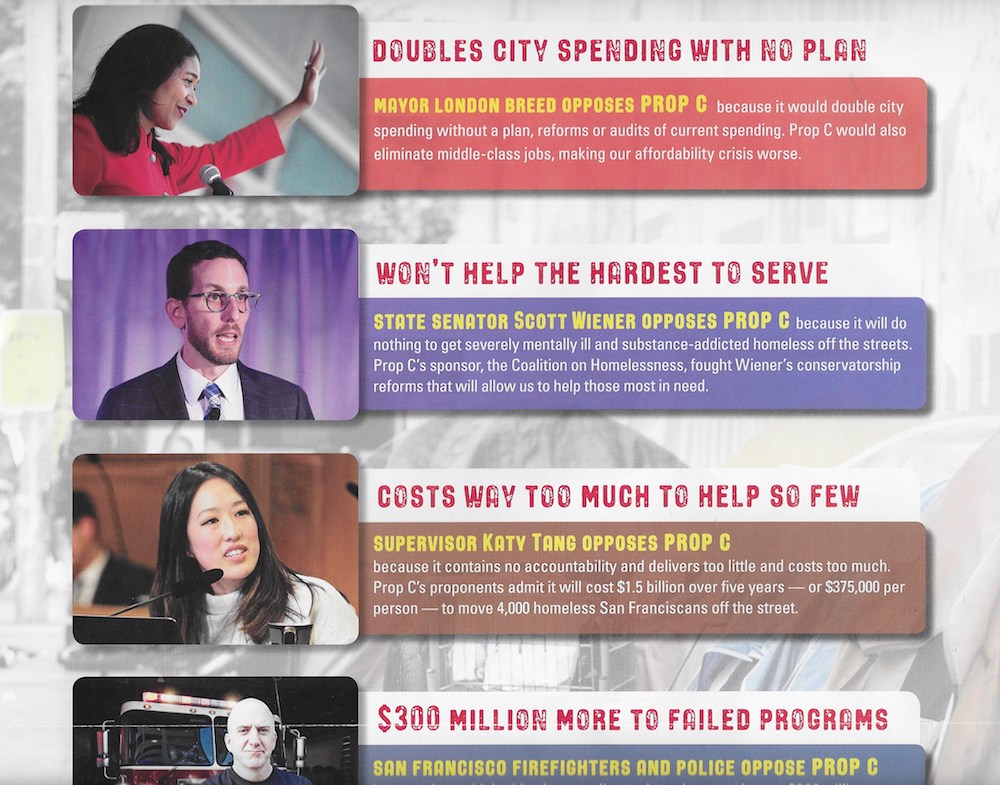 Since when are London Breed, Scott Wiener, Katy Tang and the SF Firefighters “leaders” in the fight to solve homelessness? None of them have put forward effective plans, worked with service providers, or done much other than to make campaign promises.

There are people whose politics I don’t share who have worked on homelessness. Former Sup. Mark Farrell did some (bad) things to address the problem. But Katy Tang? She’s been entirely missing on the issue.

Scott Wiener took on a lot of causes in SF and is writing a lot of bills in Sacramento – but homelessness was never one of his top priorities and he certainly wasn’t a “leader” on the issue.

This is the first time I’ve ever heard the firefighters as “leaders” on homelessness.

The real “leaders” are the grassroots organizers and groups like the Coalition on Homelessness – and they are the ones who wrote Prop. C.

Does anyone really believe this stuff?

Laura Clark, a Yimby Action leader and big supporter of Sonja Trauss for Supervisor, has been attacking Matt Haney on Twitter, saying that he took an illegal campaign contribution from a text-messaging service called Hustle. 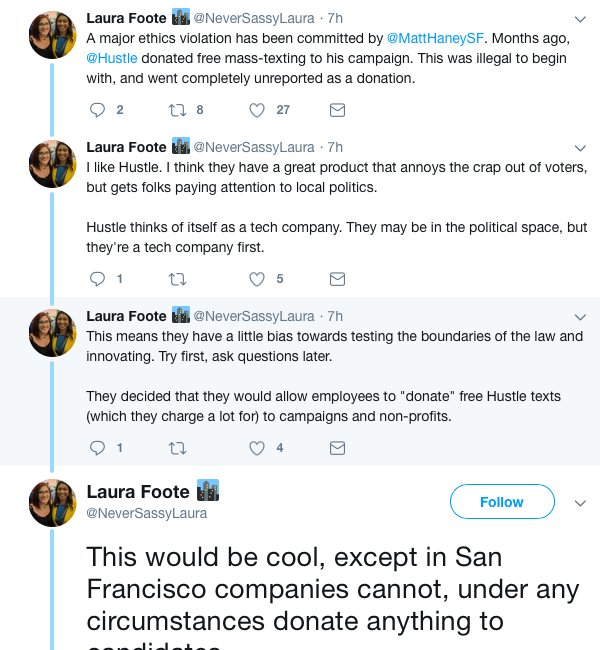 Trauss immediately emailed me – and apparently she and Clark also emailed other reporters – asking if we were going to cover this.

So yeah, I checked it out. Here’s what actually happened:

Hustle offered Haney’s campaign a one-year “pilot” program – a chance to try out the text service. That costs $150. The person who offered it said they could have it free.

Haney told me that his campaign asked Hustle how that should be reported, and Hustle’s legal team said it was an in-kind donation worth $150.

Instead of taking an in-kind donation, Haney decided just to pay the $150, he said. If the campaign goes beyond the allowable number of uses, it will get another invoice and pay it.

I talked to a spokesperson from Hustle and she confirmed that account. “His was invoiced $150, and that has been paid.”

Trauss told me she does’t believe that:

I consider a donation from a corporation to be a major ethics violation. Everyone in politics knows you’re not allowed to accept donations from corporations, it doesn’t matter how much the donation is for.

Also, Haney’s campaign did use Hustle, and what evidence do you have that the value of the gift was $150? Haney used Hustle to facilitate texting their volunteers.

I actually do have evidence. Hustle told me that was the value. And I have the invoice. 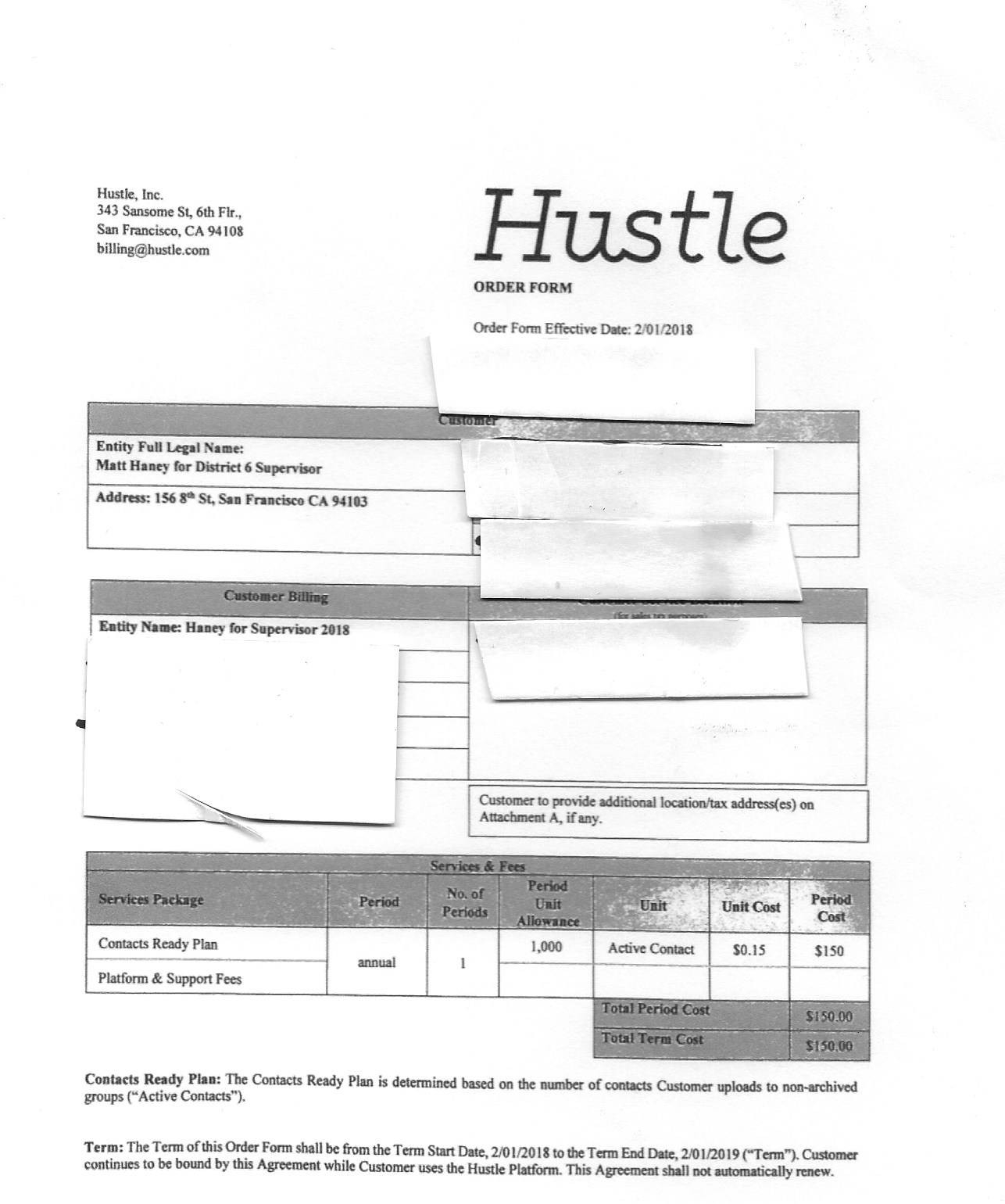 I can’t believe you’re going with this “trial” line. The CEO clearly states that it was a “gift on behalf of an employee” in the email. There is no mention of a trial program. Hustle doesn’t have anything on their website about ‘free trial program for campaigns.’ They do have a section describing the fact that Hustle will donate texts to organizations when their employees ask them to. Which is what happened here.

That seems unlikely: Haney is reporting a $150 payment to Hustle. It would have been foolish for the Haney campaign, which is a professional operation, to take a major in-kind donation from a company and not report it.

Meanwhile, I looked at the latest filings and Trauss received $500 contributions from two corporations, one from NPU Inc. and one from Ashbury General Contracting. That’s illegal. It’s also not a huge deal – it’s $1,000, and she told me today it would be returned.

The $150 that Haney paid to Hustle is not a big deal either; it’s not even a story.

The real story in D6 is the vast amount of money, more than half a million dollars, that is being poured into elected Trauss or Christine Johnson by some of the biggest corporations, corporate organizations, and real-estate interests in the city. Not to mention the cops.

The reality in today’s political world is that modest campaign contributions ($500 is the local limit) and minor violations of those limits are almost irrelevant. It’s the massive IE money that shows where a candidate’s likely alliances will be.

And given the radical right’s control of the US Supreme Court, that doesn’t seem likely to change anytime soon.