Review: Carrying the weight of diaspora in ‘Her Portmanteau’

Mfoniso Udofia's play at ACT Strand explores the complexity of mother-daughter relationships once circumstances have torn them apart.

ONSTAGE A young woman frantically shouts into a graffiti-scrawled pay phone in a shabby airline terminal. She clutches a green handbag and tries to keep an eye on her red valise, while attempting to get a message across to someone on the other end of the line.

She is speaking in a language many of us don’t understand to someone we cannot identify, and yet her voice is so anxious, her body language so tense that we immediately understand what she is going through. She is stranded, she does not know where to go, and—over static and a bad connection—she is desperately trying to communicate with that distant person.

This is Iniabasi (Eunice Woods), a stranger in a strange land.

So we sigh with relief when a young woman approaches her, telling her that she is her sister Adiaha (Aneisa Hicks) and she has come to take her home to her apartment.

Sisters maybe, but even their clothing underscores their differences. Iniabasi, coming from some very warm climate, is wearing only a light windbreaker and flats. Adiaha is in a winter parka and boots, with a scarf wrapped so high on her face that you can only see her eyes.

Iniabasi is reluctant to go with her, but figures it’s a better option than waiting at the airport. When she arrives at the apartment, she is hesitant to take off her jacket and keeps close watch over her bag and valise—her portmanteau.

Her Portmanteau (through March 31 at ACT’s Strand Theatre) is part of the Ufot Family cycle, a series of nine plays by Mfoniso Udofia exploring the history of Nigerian immigration to America through the eyes of three women in one family. “I want to illuminate that intersection. I am Nigerian. I am American. I will not choose,” Udofia states in the program notes.

The playwright is a first-generation Nigerian American with a strong connection to Bay Area theater. A graduate of ACT’s MFA program, her two earlier plays in the cycle, Sojourners and runboyrun, were produced at the Magic Theatre; ACT has commissioned Udofia to write another installment of the cycle.

Concurrently with Her Portmanteau, the Magic is staging another play in the Ufot Family drama, In Old Age. Both are directed by Victor Malana Maog, named one of American Theater magazine’s “People to Watch.” The two have collaborated closely in the past. “As a person born in the Philippines and raised in America, I’m interested in stories that wrestle with otherness,” Maog explained in an interview in the program. “On a deep personal level, I know what it means to be in another country, to be ripped from your parents, and the childish hope—even the adult hope—of reconnecting.”

Playwright Udofia uses language brilliantly to underscore alienation and confusion as well as family ties that run deep. There are over 520 languages in Nigeria, and, she explains, “You can’t write a truly authentic Nigerian play without using different languages.”

In Her Portmanteau, the characters have varying degrees of ease within one of those languages, Ibibio. Iniabasi assumes her half-sister, born and raised in the US, does not know her language, and she makes barbed comments in front of her. She’s taken aback when Adiaha, like many children of immigrants, actually does understand—and responds in kind.

Woods’ portrayal of Iniabasi is mesmerizing: her cold and aloof manner thinly veils the deep pain inside. She recoils when her mother Abasiama (Kimberly Scott)—whom she hasn’t seen for decades—tries to greet her with a hug. She rebuffs her sister’s efforts to welcome her with home cooking, mocking her use of Jiffy muffin mix instead of yams to accompany a traditional Nigerian stew.

She casts a disparaging eye on four garish psychedelic paintings on the wall of her sister’s apartment. When Adiaha tells her that a friend painted them and gave them to her, Iniabasi declares, “He hates you!”

In return, Adiaha bristles when Iniabasi informs her that she has no right to be called by the honorific “Elder Sister,” even though she is the oldest in the family that she grew up with in America. When Iniabasi pulls the elder sister card and tells Adiaha, “You are very disrespectful,” the calm, accommodating Abasiama, has finally had enough. “And you are a delight!” she responds, her once encouraging voice dripping with sarcasm.

As secrets and truths are revealed, the sisters begin to realize they do not understand each other’s lives, sorrows, or aspirations. Iniabasi assumes she is soon going to be bringing her young son to join her “in a big house in Massachusetts.” Adiaha and their mother know that is not in the plan.

Scott plays Abasiama with warmth and restrained dignity, trying every way she can think of to please both her daughters and make peace between them. But despite her efforts, Iniabasi’s sharpest anger is directed to her mother. She accuses her of abandoning her so that she could continue her studies, leaving her to be raised in Nigeria by her father. “You are the absolute winner of losing,” she spews. 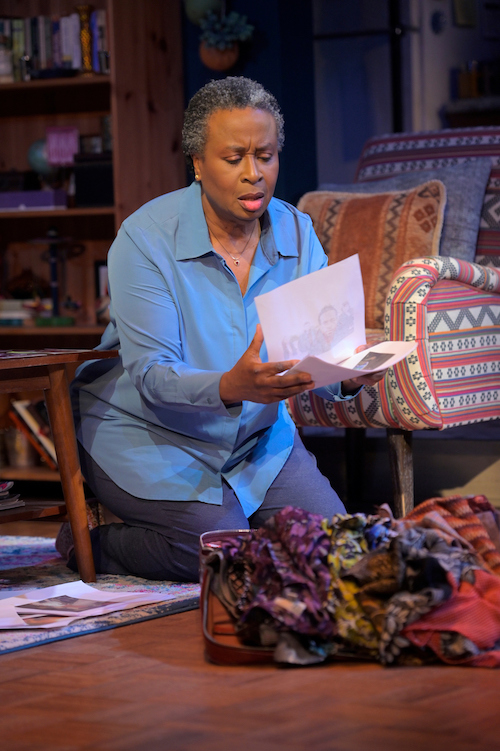 Alone and filled with sorrow, Abasiama recognizes that Iniabasi’s red portmanteau seems to be the very one that she used on her journey to America, three decades earlier. She cannot resist opening the suitcase to make sure…and then the deepest secrets are revealed. It is like opening a Pandora’s Box when she discovers what’s inside.

There are moments of real tenderness between the women as they desperately attempt to both justify their own lives and actions, and make room for each other somehow. They are tightly bound by family ties, and torn apart by circumstances: Their relationships both nurturing and suffocating.

The conflicts Udofia, Maog, and the excellent cast wrestle with reach the very soul of mother-daughter and sister-sister relationships, battered by issues of abandonment, regret, and the harsh reality of immigrant life. Unfortunately, the resolution seems quite tepid in comparison to the rest of the play.

Perhaps more complex solutions await in the rest of Udofia’s Ufot Family cycle. They are definitely worth waiting for.

Review: ‘Toni Stone’ hits a home run (and you can watch it on your couch)

Editor's Note: In the wake of its theaters shutting down, ACT is streaming its plays Gloria (reviewed here) and Toni Stone, reviewed below on...
Onstage

If you’ve ever worked in an office—and, face it, who hasn’t—the stage set for Gloria (through April 12 at ACT's Strand Theater) will feel...
Onstage

Even before the play begins, a red suitcase is in full view, slightly stage right, on an otherwise empty set. During the course of the...

On December 22, The Klezmatics celebrated the first night of Hanukkah at the SFJAZZ  but—unfortunately for San Franciscans—unlike the oil in the Macabees’ lamp,...
Onstage

With women at its center, ‘Amaluna’ sparkles and charms

I can’t even count how many times I held my breath or clutched on to my seat.  Or put my palms over my eyes,...