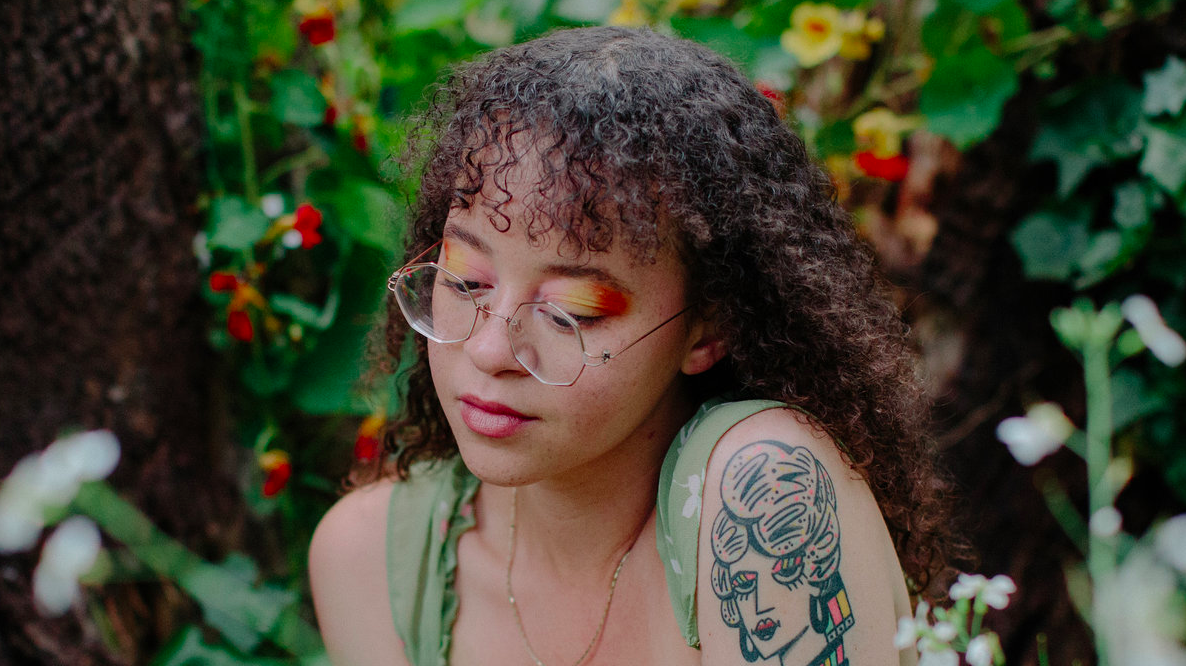 The concentration of musical ability that runs through the Bay never ceases to astound. A dazzling array of musical expression keeps our ears buzzing 24/7 as we listen to projects from large and small labels, and self-released sounds. We decided to start a column featuring the SF Bay Area’s vast assemblage of talent; here’s Local Listen.

Listen, when you find an artist who is speaking your language musically, you pay attention. Eki Shola (“Eh-key sounds like Becky without the B, Show-lah” according to her website) is that left-field alchemist we could all use a dose of from time to time. Born in London and given a Nigerian name by Jamaican parents, they emigrated to New York in the late 1980s, and eventually, Eki and her family moved to the Bay Area. Her music? It moves along with sterling realness. Post R&B, spacey digital soul arrangements, instrumental runs of experimental bass music, pockets of jazz, stretches of broken beat, tucked away strains of dub, with the occasional drum and bass sprawl. Yep. It’s a trippy set that invites you to be engaged at a measured pace. This is a specific kind of portal.

“Jubilee” features Yehu Salah, who puts in those beats and bass work from planet Saturn. The song is a treasure trove of frequencies, tapping that head-nod chakra of interconnectedness.

“When you lose your music including all your stems in the 2017 wildfires and you come across a musical gem among your saved emails—you realize how making music doesn’t have to be temporal nor perfect in its process,” goes the album description provided by the track’s artists. “It’s all about the vibe and how it makes you feel. Jubilee is about two artists virtually collaborating and connecting… music unifies us all.”

This Sunset District-based artist (as per announced in Resident Advisor last week) has been signed by Leaving Records, and will have her eight-song debut Ways out by the end of October. Queer, BIPOC, classical musician-turned-producer Xyla is heavily influenced by footwork, R&B, club, and orchestral music. That distinctive blend made her signing with Leaving Records a logical choice. Both label and producer share a kindred affinity for adventurous musical styles that defy easy categorization.

Xyla explains, “I listen to so much music, and I really feel like my music is all over the place … I was having an identity crisis, and then Leaving Records announces the mantra ‘All Genre, All Genre, All Genre.’ Yes, that’s me.”

Fatsouls, San Francisco’s premier label for high caliber Afro-house, delivers once again. Coming with the energetic pulse on the two-tracker ‘Word of Ase,’ the label’s DJ Said and Coflo are reunited and joined by Ocha Records label boss Carlos Mena. Soul-controlling the two tracks—a morning and an evening mix—Mena’s accents and chants provides validation and balance (the meaning of “Ase”) to both soulful Afro-house singles for an uplifting vibe. Harken to DJ Said; “Let the music and spirits move you. Dance!”

Oakland’s Tight Pajamas is a Bay Area creative team whose sly and unpredictable songs peck and gnaw at the default mindset, challenging social and sexual mores. Theirs is an eclectic collaboration between polymath musician Susie Davis, free-range writer Jeff Greenwald, and their odd menagerie of family and friends. According to Davis, “We have a small but mighty catalog of songs that talk about local subcultures. If you are interested in songs about polyamory, boys who were girls clothing, furries, or Krampus check us out.”

Pete Kronowitt — Do Something Now

This San Francisco-based artist is a throwback to the singer-songwriters of a different era who battled and questioned injustices in the world—but not by gifs or Tik-Tok vids. Here, the struggle takes the shape of a pen and a guitar. Woody Guthrie, Pete Seeger, and John Prine immediately come to mind when listening to Kronowitt’s recently-released, 11-track album Do Something Now.

Marxoxo, who identifies as a queer nonbinary artist from the East Bay, blends bubblegum beats with sultry R&B. “Feels Like The First Time”, a song born out of the emotions of a failed relationship, “takes you on a ride of bittersweet nostalgia, daydreaming about starting over with past loves.”

A Black-empowering label's catalog from the 1970s is re-released. Should Black people helm its return?
Read more
Music

SIP hotel residents say the city's not living up to its promises -- and contracts.
Read more
News + Politics

Bill would criminalize pot smoking for a large part of the city's population.
Read more
Puff

Doesn't City Hall have better things to do then send law enforcement after people who light up in their own homes?
Read more

SIP hotel residents say the city's not living up to its promises -- and contracts.
Read more
Puff

Doesn't City Hall have better things to do then send law enforcement after people who light up in their own homes?
Read more
Screen Grabs

Bill would criminalize pot smoking for a large part of the city's population.
Read more