More
UncategorizedReal-estate interests say voters should have no role in... 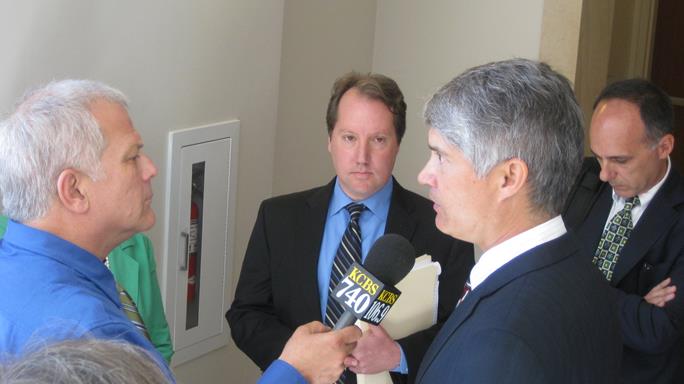 MARCH 17, 2014 — Superior Court Judge Marla Miller heard arguments today about whether the waterfront height-limit measure should appear on the June ballot, and while much of the discussion involved legal technicalities, the message that came from the opponents of the measure was simple:

Robin Johansen, representing three people who want to see more development on the waterfront, made the political point pretty clearly: “This measure,” she said, “would bring the Port planning process to a halt.” That’s because so many of the projects that the Port Commission is pushing violate existing height limits, and if Prop. B passes, they’ll need voter approval.

The heart of the case: Since the Port manages land under a state tideland’s trust, Johansen said, regular land-use rules don’t apply. The Port is in essence above local law – and thus a local initiative can’t restrict the ability of the Port Commission to make independent land-use decisions.

That, of course, conflicts with at least 20 years of local politics: San Francisco voters have used the ballot to set waterfront planning rules on repeated occasions. The same people who are trying to stop Prop. B were involved in promoting 8 Washington – through a ballot measure that would have changed height limits on Port land.

In 1990, Proposition H – put on the ballot as an ordinance, just like Prop. B – essentially froze all development on the waterfront until the city came up with a long-term plan, and banned any new hotels on Port property.

Johansen told reporters after the hearing that “nobody ever challenged any of those measures.”

Douglas Carstens, representing Becky Evans, who is the sponsor of Prop. B, acknowledged that the law on Port land is tricky and complicated; “it’s not a simple case,” he said. In fact, he argued, since there are Supreme Court precedents on both sides, this effort to remove it from the ballot, requiring a quick briefing and argument schedule, is unfair: “We can have the merits discussion at a later date,” he said. “If there are questions, they can be addressed after the election.”

Particularly since there’s a chance the voters will reject Prop. B anyway, making the whole legal case moot.

In fact, pulling a measure off the ballot when it has fully and properly qualified is a fairly radical step: “This measure is not clearly enough invalid” to justify depriving the voters of their say, Carstens noted.

Ah, but Johansen thinks it is – in fact, she said, just allowing a vote on something that might turn out later to have legal flaws is a terrible idea: “Putting something before the voters that they don’t have to power to enact just feeds cynicism,” she argued. She also said (perish the thought) that this could “encourage future initiatives” on land use.

But deeper into the oral argument, another line of attack appeared, and it’s one that we’ve heard many times before. The need to develop Port land for money is so imperative, and the process so complex, that the ordinary voter shouldn’t get involved.

She spoke of the “uncertainty” of what the voters might do, and how that would discourage developers. “The initiative process,” she said, “is ill-suited for this planning process.”

More: “These issues don’t belong on the ballot. It’s too important to be reduced to a four-sentence argument.”

In other words, planning should be left to the planners, and the rest of us, the people who just happen to live here, should shut up and live with whatever the mayoral appointees at the Port tell us is good for us.

Thing is, this is the waterfront. It’s part of San Francisco’s public space. I know the ballot box isn’t the best place to decide every land-use issue, but the people of this city have made it very clear over the years that they want to be involved in major decisions around public space. “The beauty of democracy is that the voters have that ability,” Carstens said.

Miller is expected to rule very soon, since the deadline for printing ballot handbooks is April 2.

Previous articleThe City College protest video you must see
Next articleThe battle of 16th and Mission: Inside the campaign to “clean up” the plaza and build luxury housing

Plus: Private electric-car charging in neighborhood curbsides? And a key vote on housing in the Tenderloin. That's The Agenda for Sept. 27-Oct. 4