More
UncategorizedImmigrants depend on luck for health care

Immigrants depend on luck for health care

New study shows ‘how unjust and unethical the system is’ 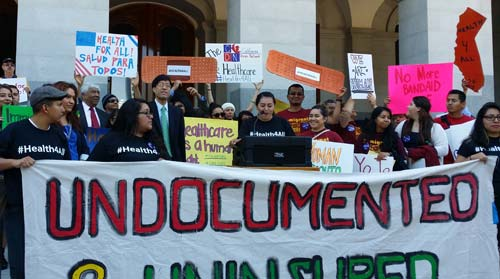 MARCH 24, 2015  – Undocumented immigrants’ ability to stay healthy might come down to a matter of luck.

That’s one of the findings that emerged from a study released this week by The Greenlining Institute, a national research and advocacy organization.

Prohibitive costs, language barriers, fear of outing themselves as undocumented, and a perceived lack of cultural competency among health care providers were among the reasons undocumented immigrants gave for not seeking timely medical care when they fell sick.

Those who managed to stay healthy said it was purely because of luck, a remark that should make Americans cringe, given that the United States has one of the most advanced health care systems in the world, said Anthony Galace, a fellow at Greenlining and the report’s author.

“This notion of luck just shows how unjust and unethical the system is,” Galace said. “I believe that as a state we can all be healthy, and the only way we can be healthy is if we are all given easy access to health care.”

For the study, Galace interviewed 13 undocumented immigrants from difference ethnicities – four Mexican, two Salvadoran, two Korean, one Vietnamese, one Chinese, one Nigerian and two Filipino – all between 18 and 52 years, living in California and from low-income backgrounds.

Some interviewees said that they resorted to such home remedies as lemon and honey and over-the-counter medications when they got sick. One woman said she once endured stomach pains for as long as she could and went to the ER only when the pain became “unbearable.” Doctors were able to save her life even though she had checked in with significant internal bleeding.

Another study participant said that on more than one occasion, doctors turned his sister away because they couldn’t understand her or her parents “and it was hard for me to translate.”

Many of the younger interviewees said the struggle their families went through living without health insurance has led them to consider health care professions. They said it has also inspired them to campaign for such bills as SB 4, the Health For All bill sponsored by Sen. Lara Ricardo, D-Bell Gardens, that would provide access to health insurance for everyone, including undocumented immigrants who are left out of the 2010 Affordable Care Act (ACA).

Nearly 7 million of the nation’s 11 million undocumented people who were barred from the ACA lived in California at the time of its passage. But thanks to the Deferred Action for Childhood Arrivals program — President Obama’s 2012 initiative that temporarily suspended the deportation of young people residing unlawfully in the United States who were brought to the country as children – around 125,000 of them became immediately eligible for the state-funded health insurance program for low-income people, Medi-Cal (California’s Medicaid). Even so, some 1.5 million undocumented people in the state continue to be uninsured.

Even if the courts overturn a challenge to Obama’s 2014 executive action to expand DACA, as well as provide parents of lawful permanent residents and citizens employment authorization for three years under a program called Deferred Action for Parents of Americans (DAPA), the majority of the 5 million or so who will benefit won’t have access to health insurance. But those living in California will have a shot at getting health insurance through Lara’s bill.

The bill would give all Californians access to state-funded Medi-Cal and set up a marketplace similar to Covered California where they could purchase insurance, but without the benefit of federal subsidies.

Lawmakers are currently finalizing the language of the bill and a funding mechanism for its implementation. It is expected to be ready for public comment in about two weeks.

How Haight Ashbury countercultural ideals were distorted by a tech "co-living" experiment, and a trans performance community was displaced.
Read more
Arts Forecast

Plus: Whiskies of the World, The Bad Plus, Public Works' 10-Year, "Bacchae Before," more upcoming events.
Read more