The Bay Guardian's annual celebration of all things "Best" is back -- check out all the winners here!

48hills is proud to host the SF Bay Guardian 2016 Best of the Bay. Please see www.sfbg.com for Bay Guardian election endorsements and more.

For half a century, the Guardian has been “on guard” — speaking truth to power and keeping a watchful, progressive eye on politics while also supporting local small businesses and vital artists and arts organizations. That’s a lot of decades!

Along with you, we’ve discovered incredible new things, dusted off some classics, and continued exploring all the wonders of the Bay Area with an open mind and the feeling of living in the best place on Earth.

The Bay Guardian stopped publishing as a weekly paper in 2014, but the seeds of its revival were sown almost immediately afterwards, first with the publication of a Guardian commemorative edition in January 2015 and then when Guardian editors and publishers expanded our sister daily news publication, 48hills.org. Last November, we regained the rights to the Bay Guardian and relaunched www.sfbg.com, which was covered nationally as an example of how the alternative press could be revived. 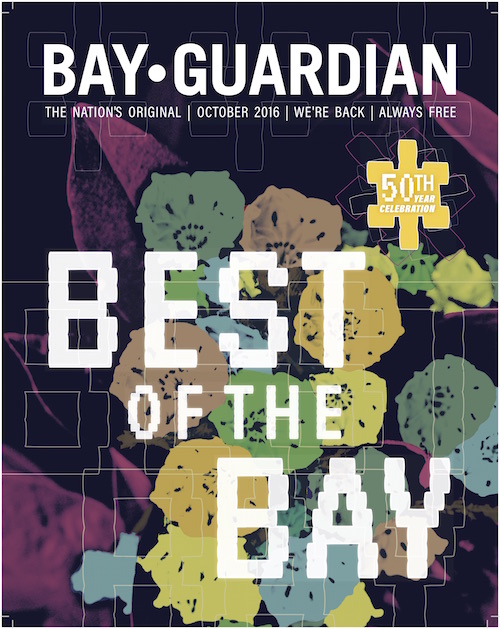 Now we’re back in print! This month we published our Clean Slate election endorsements issue (you can read them online here). And now here comes the 41st Best of the Bay, brimming with all the good stuff you’ve come to expect. This is the issue where your voice is heard on everything from Best Burrito and Best Live Music Venue to Best Shoe Store and Best Politician (and Best Politician You Love to Hate).

Over 9,000 people voted in our online Best of the Bay Readers Poll. As a result, there are a few significant shakeups in some of the major categories, and the return of several familiar names in others. That’s very cool — not only are there still some great legacy businesses holding on in the city, there’s lots of healthy competition to be the best.

As usual, we’ve also included some Editor’s Picks, of businesses and organizations that we think deserve special mention this year for their accomplishments. We’d also like to thank all of our advertisers and supporters this year. Without you, we wouldn’t be here.

We’re hoping our return signals a new era of progressive open-mindedness, civic engagement, small business support, and artistic exploration, especially in San Francisco, where it can sometimes seem like our greatest moments may be behind us. But you only need to flip through the pages of this edition to see that the Bay Area is still best — and so are our loyal readers.

Bruce B. Brugmann and Jean Dibble

Trigger warning: This review and the production it covers...
Food & Drink