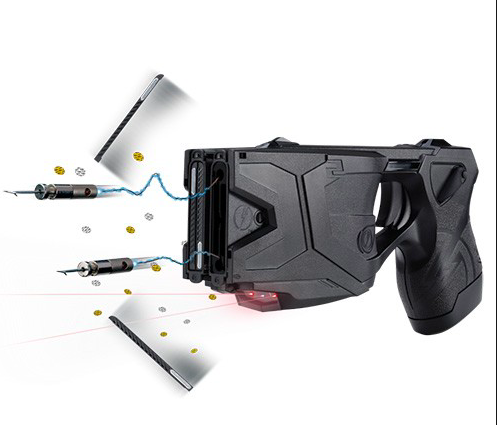 “We were literally locked out of City Hall.”

It was a chaotic meeting: One speaker, Maria Cristina Gutierrez of the Frisco Five, stepped up to testify and didn’t stop after the two-minute limit. She kept speaking as the commission president, Julius Turman, kept asking her to allow the next person to speak.

When she refused, Turman called a recess. Speakers were later allowed in, but only in groups of five.

Taser opponents, including Altman, argued that the conduct of the meeting violated the state Brown Act, which requires open meetings.

“[The Police Commissioners] were meeting in the Board of Supervisors room downstairs, and the Brown Act states that you have to clear the room then re-admit people into that same room who you feel are not going to disrupt the meeting to continue it. But that’s not what they did,” Altman said.

The critics filed a complaint with the city’s Sunshine Ordinance Task Force – which ruled unanimously that the commission meeting violated the law.

All of this wound up back at the commission Feb. 20, when the panel discussed how to respond to the Sunshine Task Force ruling. In the end, the commission deadlocked 3-3 – leaving the vote, and the Taser policy, still in place.

The vote demonstrated the clear divide between commissioners appointed by the supervisors, who wanted a new discussion on Tasers, and the mayoral appointees, who want the stun guns to be a part of SFPD’s arsenal.

Commissioner Petra DeJesus said at the Feb. 20 meeting that she herself in 2017 had found the doors to the meeting room locked and was able to convince the sheriff to let some, but not all, people in.

“No one is debating that there was a disruption by the public that created the chain of events, that’s not the point. The point is what they did in response to that was violating the Brown Act,” Altman said.

Instead, the commissioners left the original meeting room and were surreptitiously led through back rooms, according to a letter written by DeJesus. The panel then re-convened the meeting in room 250. During this time, City Hall was locked down, Altman said.

The people in the downstairs room, including Altman, continued to testify for about a half hour. Some people left because they thought the meeting was canceled. The Sheriff’s Department said City Hall was only closed for 13 minutes, but Altman proved through video footage and witnesses that it was closer to 45 minutes.

At the Feb. 20 meeting, DeJesus proposed that the commission rescind the vote then hold a new vote on Tasers.

Altman argued that the panel should revoke the Taser vote and then put the matter aside until “the other 271 recommendations made by the Department of Justice to reform our police department are evaluated.

Altman testified that Tasers are far from safe.

“More than 1,000 people from 2015 have died of the use of Tasers. One of my dear friend’s sons was killed by Taser. In San Mateo, four people in six months were killed, almost always people of color,” Altman said.

DeJesus then took Altman’s suggestions and amended the initial proposal. She made a motion, which was seconded by Commissioner John Hamasaki. The vote was 3-3, since Commissioner Thomas Mazzucco was absent.

“Every time a mockery of the people’s will like what happened tonight occurs, it reinforces that feeling,” he said.

This is not the end of the issue. The supervisors Budget Committee did not budget money for Tasers, although the Police Department could try to get the money from reserves.

“It is an outrage that this vote stands, and it’s a very shaky ground if they actually end up getting Taser,” she said. “We haven’t yet and I still say there’s a way to get through this.”