The fliers fluttered down from the third balcony at City Hall as Mayor London Breed finished up her inauguration speech Wednesday.

The sweeps that the literature referred to are homeless sweeps — the forced removal of homeless people and their property from public space, which homeless advocates around the country have called on cities to end.

The activist group, which has yet to be named, also stood in front of City Hall with banners that read “Sweeps = Trauma” and “Sweeps = Theft.”

Breed’s inauguration speech zeroed in on addressing San Francisco’s housing and homelessness crisis, saying that “No one should be left out in the cold.” However, Breed also contended that homelessness also needed to be addressed with “tough love.”

“We are no longer accepting that compassion means anything goes,” Breed said more than once during the speech.

Her words came in the midst of the encampment eviction that occurred that morning, where 20 people along the underused Union Pacific rail tracks at the corner Jerrold and Rankin streets in the Bayview were swept.

The city did some outreach to the encampment before the sweep, but Kelley Cutler of the Coalition on Homelessness said it “wasn’t nearly enough.” At 8am, San Francisco Police and Public Works staff forced residents to move immediately. Bulldozers began throwing residents’ belongings away. 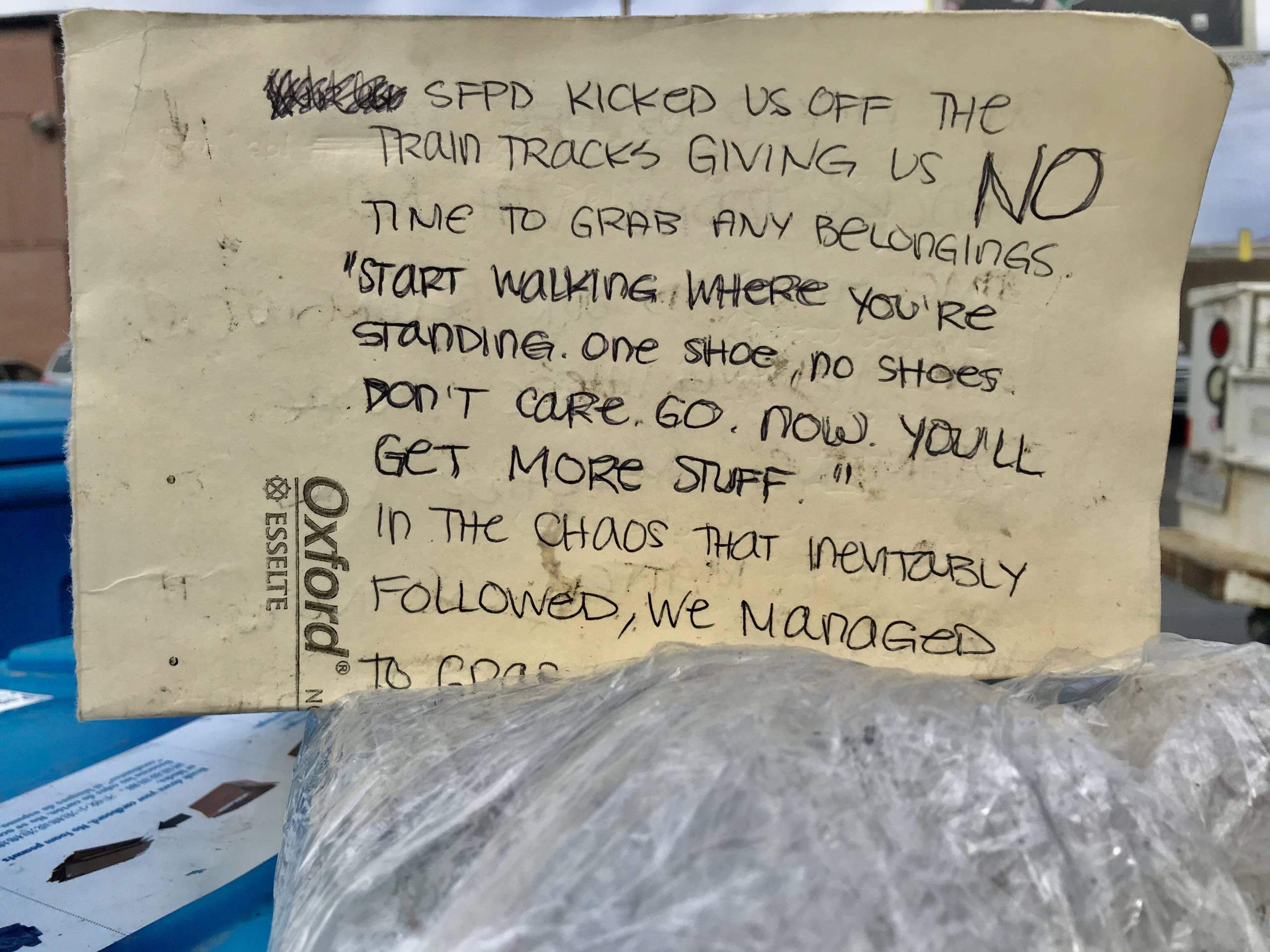 One encampment resident was barred from returning to the encampment to get his medication, Cutler said. Another resident left a note behind with her belongings:

SFPD kicked us off the train tracks giving us NO time to grab any belongings. “Start walking where you’re standing. One shoe, no shoes. Don’t care. Go now. You’ll get more stuff.”

The issue wasn’t the safety of the residents – the trains only come by twice a week, and the people there are prepared to get out of the way.

Encampment residents were offered 30-day Navigation Center beds, which some accepted. At the end of the 30 days, though, they’ll likely be back out on the streets. According to the City’s own data, only 10 percent of clients have ended up in permanent housing in the past six months.

Shanna Couper Orona, an unhoused, disabled firefighter who assists other unhoused San Franciscans with their medical needs, has witnessed more than a hundred homeless sweeps and had this to say to Breed:

“You’re destroying people from the inside out. People out here want to give up on life. We’re human beings and you can’t just make it like we don’t exist.”

Around the corner from the homeless sweep is a sidewalk memorial for Al, who died last week of hypothermia and pneumonia. The memorial is lined with candles and a wall full of messages. Going to miss you.