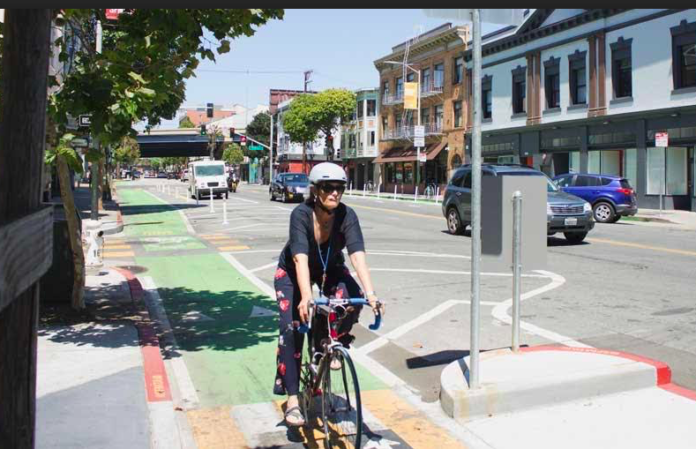 On Monday night, the meeting room at  the City College Mission campus was packed as tightly as an N-Judah train during commute hours. The Municipal Transportation Agency had called for a discussion of protected bike lanes on Valencia Street.

Moms rolled in, unstrapping kids from bike seats. Young and middle-aged people carried helmets and wore yellow shirts proclaiming,  “Protected Bike Lanes Save Lives.” And as Valencia St. churchgoers and business owners stood in groups around the perimeter of the room voicing concerns, people searched for surfaces to fill out public comment cards.

A long table ran across the middle of the room, displaying the proposed designs for protected bike lanes on Valencia from 19th Street to Cesar Chavez. Attendees dressed the design with sticky notes, bearing comments ranging from enthusiastic to dubious.

This plan is a continuation of the Valencia Street Pilot Project, which added protected bike lanes on Valencia between Market and 15th Street. The SFMTA reported a 99% decrease in vehicle/bike interactions in the middle of these protected blocks as well as a 100 percent reduction in near-dooring incidents since barriers were installed.

“This project has been in the works for three years, and there’s been lots of solid back and forth in terms of partnering with community businesses, advocacy groups, people from the community, and experts at SFMTA to get the designs in place,” said Melissa Lewis, communications and marketing director at the SF Bike Coalition.

If approved, the plan would allow the construction of barrier-protected bike lanes along this stretch of Valencia and relocate parking spots and loading zones to the left of bike lanes to prevent cars and trucks from blocking the bike lane and to minimize the risk of cars pulling in and hitting bikers.

Bike advocates say cars park in their lanes on Valencia often. Users of safelanes.org, an app that allows you to upload photos of illegal parking across SF, reported 61 instances of cars and delivery trucks blocking bike lanes on the Valencia corridor in just this past week. Since the project went live in August, users have reported 934 instances of blocked bike lanes on Valencia.

“Valencia Street is a ticking time bomb,” said Stephen Braitsch, who runs Safe Lanes. “It’s a mirror image to what Howard Street used to look like in 2019.”

Almost a year ago, 30-year-old Tess Rothstein was run over and killed by a truck while biking down Howard. According to witnesses, she swerved into traffic to avoid getting doored.

“As a city, we have to be proactive: use the data and tools we have today to prevent someone else from getting killed, which will happen on Valencia if we do not install protected bike lanes,” said Braitsch.

Other features of the plan include adding barriers at intersections to protect walkers and bikers from right-turning cars; building curb ramps for wheelchairs and strollers; outlawing left turns from Valencia to side streets; and adding meters on side streets to encourage parking turnover.

John Davidson, a Valencia bike commuter who supports the plan, recalled his experience getting hit last November. “The car in front of me evidently hadn’t seen me and went straight into that space in the bike lane where the cars are often stopping for loading and unloading. I was there, and it knocked me off my bike.”

“Even though I’m riding right there in the lane in my bright green jacket, cars will swerve right in front of me, and I almost get hammered,” said Chris Sanders, a Valencia biker. Sanders hasn’t gotten hit but recounted seeing a woman get hit on Valencia, around 22nd St. “The car door swung open, and it was like Splat! Bam!”

While many people came to the hearing to show support, others came to express deep concerns about reduced parking.

Leila Mansur, co-owner of Radio Habana Social Club, said she fears her customers will stop coming if parking becomes too challenging. “A lot of our clients are elderly,” she said. “A lot of them have been displaced to the Sunset, to the Excelsior, to South San Francisco. But they like to come out at night. How can they? We need parking.”

Somewhat counterintuitive opposition is coming from Paul Olszewski, the owner of Valencia Cyclery. Olszewski told the San Francisco Chronicle that many customers drive to his family-oriented shop and that he “canvassed over 100 merchants, and 99.9% of them are objecting.”

In addition to taking out official parking spots, the plan would remove the center turn lanes on Valencia to make space for bike lane barriers and loading islands. Churchgoers and funeral attendees often park in the turn lanes on Sundays and in the evenings.

“Well I’m not a happy camper,” said Shirley Foreman, the church administrator at St. Mark Institutional Missionary Baptist Church on Valencia between 19th and 20th. “I’m disabled and no longer have the strength of my body to walk up and down the streets. What happens to the old people? What happens to the disabled people?

“Our church has been in this location since 1971,” Foreman said. “My father was the founding pastor of that church. That’s a part of his legacy, and I feel like I’m being kicked out of that.”

Kimberly Leung, a transportation engineer at SFMTA, said the city will be offering a flat rate to park in the 21st and Bartlett garage on Sunday mornings. According to Leung, 53 percent of the existing curb space between 19th and Cesar Chavez will be preserved for parking and loading. That includes general metered parking, passenger loading zones, commercial loading zones, accessible parking, and short-term parking.

Leung wrote in an email that the SFMTA “will be sharing next steps for the project by early next week.” The city traffic engineer will either approve the project or defer to the SFMTA Board of Directors for a vote. The vote could take place as early as April.

The hearing officially ended at 8pm, but many people lingered, including Brian Stokle. “I’m not a biker but I’m a bike supporter,” said Stokle, who lives on Valencia Street and is trying to teach his 7-year-old daughter how to bike. “I only feel safe when I go on the segment that’s protected. Otherwise I would never let her go out there.”