More
UncategorizedDays in the life of a substitute teacher

Days in the life of a substitute teacher 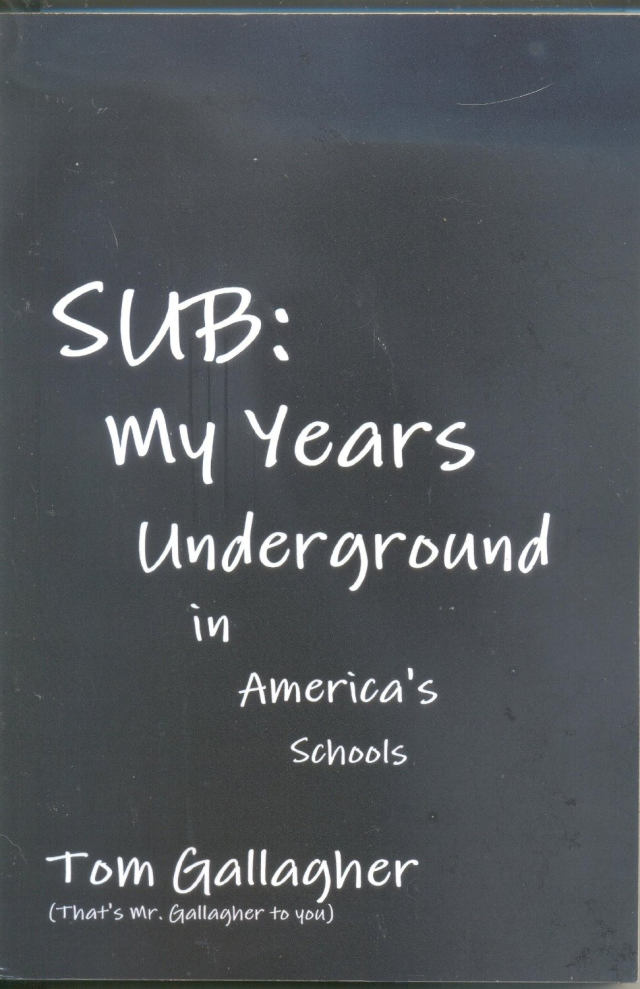 DECEMBER 19, 2014 — Substitute teachers, like plumbers and emergency room doctors, don’t see systems at their best.  Crap and blood everywhere is their normal. Worse, subs are generally not appreciated.  People usually thank plumbers and doctors. In the average classroom, when the sub walks in, the devils leap with joy.

Tom Gallagher’s new book, Sub: My Years Underground in America’s Schools, is a hilarious and insightful chronicle of one man’s odyssey as a substitute teacher in the bowels of public education in, well, not exactly all of America, but San Francisco and environs.

The sub’s day typically begins at 5:30 a.m., when the phone calls come in (or not) from the school district’s automated systems.  Getting to the school is the easy part.  Then the fun starts.  Often, the school office has no idea where the sub is supposed to work.  He gets sent to the wrong room with the wrong key at the wrong time and encounters the wrong set of kids.  When he lands in the right place, he may be called on to lead a class in anything from AP Algebra to PE kickball.  Sometimes the regular teacher, if there is one, has left a lesson plan; often not.  As a Catholic school graduate and a college philosophy major, Gallagher brings to the job a saintly store of patience and an Olympian facility in any and every subject.  Almost.

Every school needs subs now and then.  Teachers get sick, called for jury duty, pregnant, etc., everywhere.  But some schools are more voracious consumers of subs than others, and these aren’t the most fun to work in.  These are the schools where teachers get fed up or scared or burned out after short stints, where subs work a day or two and refuse to return, and where the new sub is subbing for another sub, sometimes to the third generation.

Gallagher experienced a lot of schools like those.  He worked in hundreds of classrooms from K to 12 in over a hundred schools, far more than most teachers or administrators have ever seen.  He saw enough of the schools where the system was working to conclude that “we don’t fundamentally have an educational crisis in this country,” as he says in his Preface.  But those schools don’t make for interesting anecdotes; the kids there do their assignments, pay attention to the teacher, and learn the subject matter.  Boring!

Gallagher’s book is at its sharpest, and draws blood, when he describes his experiences in the other schools, the ones where the dynamic between the class and the sub (and usually the regular teacher as well, if there is one) requires military metaphors.  It’s war in there.  Sometimes it’s physical, with kids throwing staplers, pencils, wastebaskets, and anything else handy.  More often it’s language.  From kindergarten up, some of the kids’ vocabularies would make a sailor blush, and they don’t hesitate to use this language on the adults in the classroom.  They don’t just fight authority, they’re constantly at each other, shouting, trash talking, throwing things, slapping and kicking, girls as well as boys.

The teacher’s first job, before any learning can happen, is to create order, and often enough that job takes the whole time between bells.  Gallagher keeps a running tally of how many kids he’s thrown out of class per day, and has worked out a personal iron rule: if he sends a kid to the counselor and the school administration sends the kid back into the room in the same period, Gallagher crosses that school off the list where he’ll work.  Even when he succeeds in getting the noisy, fighting, disruptive kids out of the room, that’s no guarantee that learning will happen.  There are kids falling asleep, eating, doing their makeup, socializing, texting, or just locked up in a private world, paying no attention whatever to the teacher.  When they do engage with an assignment, Gallagher often discovers desperately low levels of knowledge.

Gallagher’s tone in describing these legions of trying classroom encounters is wry, sardonic, often bitingly funny.  He could probably make it in stand-up comedy.  Some of his narratives are as good as anything in Mark Twain.  Of course his humor is at the expense of some of the kids, and of some of the teachers and administrators, but he doesn’t spare himself.

Apart from the Preface and a brief appendix, where Gallagher pencils in the lessons he has drawn from a decade and a half as a sub,  the book consists of anecdotes in daily journal style: date, school, assignment, interesting experiences.  That’s its strength; it’s never dull, it sparkles with novelty and wit, at least two thirds of the way through.  The anecdotal wealth is also its weakness.  One could read the book  as ammunition for the chorus of public school haters.  Writers who think that schools are doing a bad job and/or that kids — especially black kids — are stupid and dangerous, will find grist here for that mill.  It’s clear from the Preface that this is not Gallagher’s slant at all.

As he says in the Preface, we don’t fundamentally have an educational crisis, we have a social crisis, or rather a series of them all wrapped up together, most particularly but not uniquely in the plight of Black America.  The attentive reader will see here kids with PTSD from bullets flying in their neighborhoods, homeless kids falling on the floor to sleep in class, kids who steal food because they haven’t eaten, kids who can’t see the board because they have no glasses, and lots of kids who have no idea how to relate cooperatively with adults because no adult has ever treated them with anything but threats and hostility.

Respect for teachers in school normally transfers from respect for parents at home.  When there is no stable home, when the parents are absent, unemployed, in jail, addicted, ill, or abusive, teachers will be the targets of the kids’ payback.  Order in the classroom comes from orderly home and job experiences, the kids’ own or their parents’.  When there are no jobs and the readiest road to cash is drugs, prostitution, and violence, that’s the ethos the kids will bring into the classroom.  Even a good-hearted liberal/radical like Gallagher has no alternative, in this kind of setting, but to come on hard and mean.  As he says, being a substitute teacher means “that I yell at children professionally.”

Gallagher has done a lot of deep thinking about his unique experiences, and is clearly capable of unpacking his compact statements about the impact of the social crisis on education.  Sure, there’s no lack of Big Picture analyses, but I don’t think we’ve had one informed by this extensive experiential basis, or by a writer with Gallagher’s unique combination of Jesuit and secular education (he reads and writes classical Greek!)  Sub isn’t that book.  Sub is, however, a sparkling, funny, and deeply felt diary from a talented practitioner of a vastly undervalued profession.

You can get a copy of the book at http://submyyearsundergroundinamericasschools.com/