Spend Valentine’s in an indie Village of Love

A benefit for Planned Parenthood brings together a packed bill of local bands at Rickshaw Stop.

Listen up, San Francisco…..This year Valentines’ Day doesn’t have to be filled with the normcore angst of hunting down chocolates, bidding for pre-wrapped roses, fighting through “Bros” in the lot of Whole Foods on Franklin, mean-mugging each other for that last parking spot.

YO! Get off the narcotic and sidestep that vanilla way.

Anybody coming downwind from a deceased relationship views February 14 as nothing but the cash grab of a Christmas it is for Hallmark. Michelle Cable, Panache Booking owner, peeped game 12 years ago and started hosting Valentine’s Day parties in New York City to conquer the isolation that often comes with this peculiar anniversary that can razzle folks who are single. 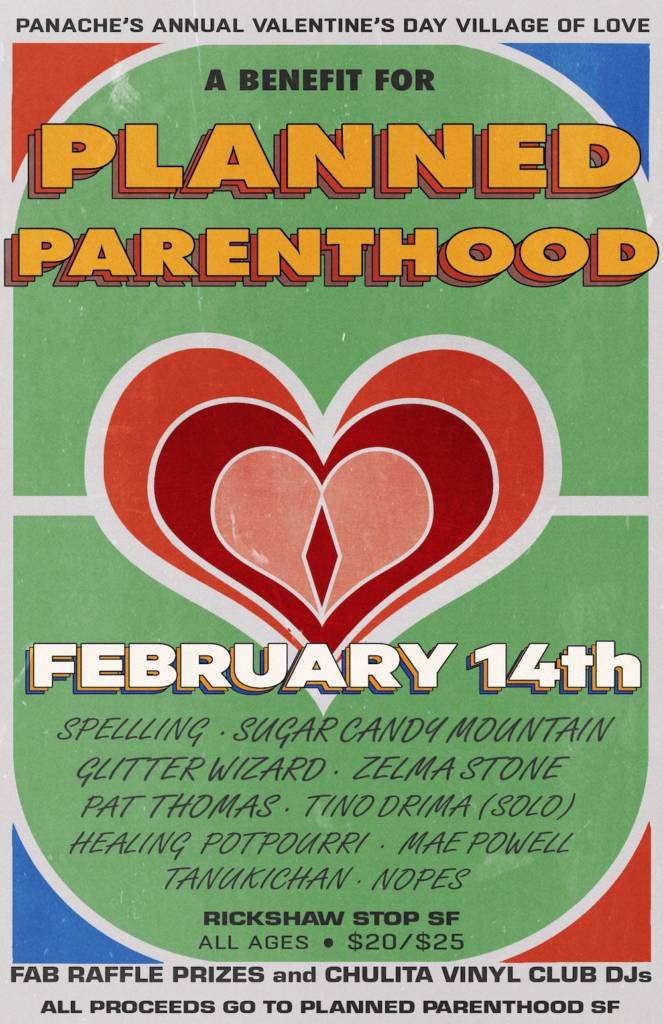 This year, whether coupled up or flying solo, San Franciscans can take part for the first time in Panache’s annual Village of Love Valentine’s Day Benefit, Fri/14 at Rickshaw Stop. Bonus: It’s packed with local bands and benefits Planned Parenthood.

“Valentine’s Day is a holiday that’s mainly promoted via romance and love, which also means sex,” says Cable. “So why not support a charity that’s all about safe sex and education?” Village of Love Benefit Concerts in Los Angeles, Chicago, and Detroit in 2019 raised almost $40,000 for the nonprofit organization that is currently under attack from the current Presidential Administration. Panache—a company owned and staffed by women—supports Planned Parenthood because its employees have personal connections to the charitable resource and the work it does providing health services to people across the country.

“Planned Parenthood is a really important organization for everyone out there who does not have access to health insurance, but especially younger women,” Cable said. “When I was younger, it was an organization that was near and dear to my heart, as it was a place where I could go to get educated on birth control or being sexually active without any judgment.”