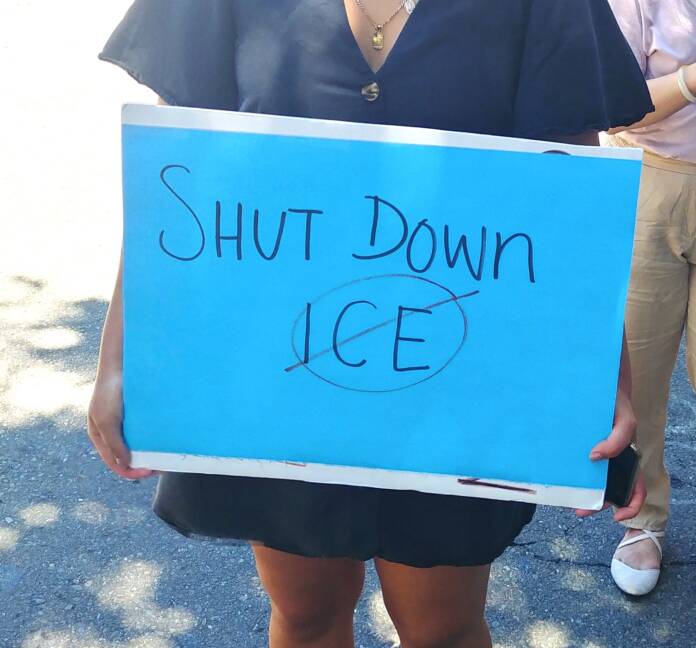 On Thursday, Free SF, a coalition of immigrants’ rights groups, warned that the Supreme Court’s rejection of Trump’s attempt to end DACA offers no real protection for most undocumented immigrants—and as the Trump administration appears to consider a new approach to end DACA, more must be done to ensure their safety. The coalition also called for the immigrants’ rights movements to join in the call to defund the police at a press conference held outside the US Citizenship and Immigration Services field office at 630 Sansome.

California Immigrant Youth Justice Alliance (CIYJA) organizer Valeria Suarez pointed out that most of the undocumented community is not eligible for DACA in the first place, which excludes immigrants who came to the US after they were 15 years old or those in the US who were 32 years or older on June 15, 2012.

Suarez herself was 16 when she came from Peru and said that the Supreme Court’s decision confers no protection for most undocumented immigrants in the US, including herself. For protection, Suarez said, they cannot rely on Congress to pass the necessary legislation: Reducing law enforcement’s interactions with the undocumented community, including dismantling the Immigration and Customs Enforcement (ICE) agency, is the only way to ensure their safety.

“People who don’t qualify for DACA are the majority of the undocumented community… The state is not protecting us, we need to protect each other, and protecting each other looks like defunding the police, and abolishing ICE so we aren’t afraid to be on the streets,” said Suarez.

“Every time we’ve been in these negotiations with DC leaders, these permanent protections [for undocumented immigrants] are always tagged with more enforcement, and there has never been any oversight to that expansion,” said Valenciano.

“Any protections for DACA recipients or anyone else that is undocumented in this community cannot mean more resources for law enforcement, ICE, or CBP, because that will only result in more separations of families, more detentions, and more caging of children at the border,” said Reyes Savalza.

“Over 80% of people in detention or who have been deported have had contact with police, and we know how much different that experience is for Black people. We know that Black immigrants in immigration detention are more likely to be held for longer periods of time, to not get pro bono representation, and they are more heavily impacted by violence of the system than anyone else,” said Valenciano.

Because of the disproportionate treatment of Black immigrants by law and immigration enforcement, Valenciano said that it is the responsibility of immigrants’ rights groups to stand in solidarity with the Black Lives Matter movement by working to end biased policing and reduce interactions between police and immigrant communities.

“What standing in solidarity means is addressing the root causes of over-policing and killing [of Black people],” said Valenciano. “Police are the same people enforcing immigration and mass incarcerating and killing black and brown people. Immigration enforcement thrives because of… its relationship with law enforcement.”

Valenciano was not alone in her belief that immigration enforcement bodies benefit from working with local law enforcement. Reyes Savalza further explained how that relationship affects undocumented immigrants and their detainment and deportation.

“The main way that people are deported in this country is from police, to ICE, to deportation,” said Reyes Savalza.”

Reyes Savalza said that he believes that the current mission of the immigrants’ rights movement is to stand alongside the Black Lives Matter movement in calling for police department funding to be directed towards community services, thusly combatting the police to deportation pipeline.

“I think now more than ever we need to understand the pipeline from police to deportation, I think we need to join the struggle the Black Lives Matter movement has led in the streets to defund police departments and to invest those resources into programs for education, for health, for social workers, and for community well-being.

“In doing so we are going to limit the resources that go to regimes whose sole purpose is to police, arrest, detain, and deport,” said Reyes Savalza.