How San Francisco changed the sound of Christian music

A newly-reissued album recorded in 1978 in the Outer Mission sheds light on the city’s role in the development of contemporary Christian music.

The Summer of Love was as fruitful a time for music as its long winter of discontent. As the hippie dream dissipated and mellow highs curdled into drug-induced paranoia and death, artists like Sly Stone and Neil Young turned away from their former idealism and wrote acrid songs about self-hatred, cowardice, and seeing their loved ones die. Marvin Gaye floated above a wounded world on What’s Going On. George Clinton foresaw “Wars of Armageddon.”

But among those who stepped away from the void and found new purpose in their lives, a new form of music would develop: a hybridization of popular music with Christian messages, then known as “Jesus music” and now known as Contemporary Christian music. The Sound of the San Francisco Christian Center, made in an Outer Mission church in 1978 and newly reissued by Boston label Cultures of Soul, finds San Francisco smack-dab at the center of this change.

The auteur behind The Sound of the San Francisco Christian Center is a man named Carl Fortier, who remains director of the Men’s Chorus at the SF Christian Center despite suffering a stroke in 2011 that impaired his ability to play his primary instrument, the keyboard. A lifelong Christian and San Franciscan, Fortier arranged and played piano and organ on the reissued sessions, using his connections in the local music scene to “do some damage for Jesus.”

Fortier was born in 1955 and began coming to the San Francisco Christian Center with his family in 1959, when it was still the San Francisco Revival Center and hosting nightly revivals with evangelists from around the country.

“It was really arousing service,” says Fortier. “The music back then was wonderful. You felt the spirit of God as soon as you walked in the door.”

In 1971, Fortier’s father left the Christian Center to found his own congregation in the Sunnydale projects. Carl became the church pianist, and his brothers Eric and Paul respectively became the bassist and drummer at services.

The church only lasted three years, but two crucial musical events occurred there that inspired the creation of The Sound of the San Francisco Christian Center. The first was the formation of Fortier’s first band, the Revelations.

“A group of us from school wanted to get an R&B group together,” says Fortier. “But when they asked me to join the group, they knew that my parents wouldn’t let me play in an R&B group, so we all decided that we should be a gospel group.”

Fortier’s second formative experience at the time was the arrival of Reverend Larry Moore, an evangelist and singer who purchased a Hammond organ for the church, on which the young Fortier quickly became proficient. Carl and Eric joined Moore’s band in 1974, touring across California. That year, the group recorded an album called Amen!, one of whose songs, “Crossroads,” was composed by Carl.

During this time, the Bay Area was swarming with secular funk and soul bands, inspired by acts like James Brown, Sly & the Family Stone, and Earth, Wind & Fire. The Summer of Love was over, but many from what Fortier calls “the drug culture” remained in the Bay Area, looking for change in their lives.

Fortier attributes two figures with the evangelization of many in these scenes. The first, Michael Casteel, was the leader of a band called Granny Goose & the Soul Chips, named for an Oakland-based brand of potato chips. The group was popular enough that when Castille found God, he brought many of his peers with him.

“Bishop Green came out of the drug culture himself during the ‘50s, and he became a Christian and just did away with all of that,” says Fortier. “’He influenced a lot of people come to the Lord too, because he was well-known out there in the drug culture and in what we call ‘the world.’”

When the Fortier family closed their church, they returned to the Christian Center under Green’s leadership. By this time, the Christian Center’s congregation comprised many residents of projects in the Bayview and Hunter’s Point, as well as disillusioned hippies from Haight-Ashbury seeking what Fortier calls the “heart-change” church could provide. 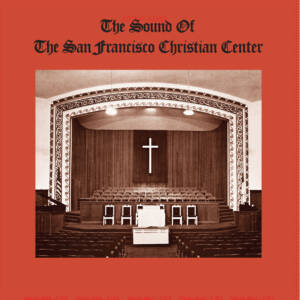 Music abounded at the Christian Center. Andraé Crouch, the San Francisco singer and choir director whose hybridization of popular music and gospel made him one of the most popular early stars of Contemporary Christian Music, sometimes came through with his choir to perform. And the church’s lavish annual Easter productions, in which the choir would sing from inside a giant wooden cross-shaped construction, were drawing lines around the block.

Fortier and the church musicians rehearsed constantly for these performances, and as they got tighter and tighter, the recording bug that first manifested in those high school Revelators sessions started to bite at Fortier once again.

In 1977, with funding from Reverend Donald Green, he began work on the album that became The Sound of The San Francisco Christian Center.

“[Reverend Green] had experienced our music all these years,” says Fortier. “So he had confidence that when I said ‘I can guarantee you the money back at the end of the project,’ he felt confident to ask the board to finance the project.”

Fortier arranged the sessions and played keyboards, with Eric on bass and the Liberators as the choir. He exploited his connections in the local scene to find the best musicians; the Larry Moore Singers appear on “Hebrews 12:2” and “The Song of Thanksgiving,” while drummer Steve Hall and auxiliary bassist Darryl Robinson were sourced from a local funk band called The Violations.

The album was completed on February 14, 1978—the same day Fortier’s daughter was born.

“We did the last mixdown, and my wife and I had to leave the studio and go straight to the hospital because she started to deliver my firstborn,” says Fortier. “So my daughter was born in the studio, almost.”

The Sound of The San Francisco Christian Center was originally released in a limited run of 1,000, but over the years, word grew about this lost gospel album from this pivotal period in the history of contemporary Christian music.

Jeff Swallom of Boston’s Cultures of Soul label first heard about the album from a German collector, who had already reached out to Fortier to try and track the record down. Upon hearing it for the first time, Swallom was immediately struck by its musical qualities.

“The musicianship and the production on it is pretty amazing,” says Swallom, who also DJs under the name Deano Sounds. “It’s kind of like a private press independent production, and that just sounds so professional and full for being a low-budget affair is pretty unique.”

Beyond its musical merits, Swallom appreciates it for its historical significance. “I think gospel music before this time period was more traditional. This period brought more contemporary influences into gospel, so it was a bit more radio-friendly or palatable for the mainstream. I think that’s kind of carried it to now where it’s become a bigger industry than it was back then.”

Bottoms up for spirits-lifting Oakland Cocktail Week (now a month)

Support local bars and drink in good company, as the festival pivots to a vital fundraiser.
Read more
Music

On experimental duo Matmos’ latest, 99 is the magic number (and collaboration is key)

M.C. Schmidt of Matmos waves a limp assemblage of taped-together scraps of paper in front of his computer camera. “This is the third hour,...
Read more
Art

These painted figures that fill the pages of Tim Presley's new book Under the Banner of Concern seem to know your secrets. No matter...
Read more
Music

How San Francisco changed the sound of Christian music

The Summer of Love was as fruitful a time for music as its long winter of discontent. As the hippie dream dissipated and mellow...
Read more
Music

Even locals would be forgiven from thinking they were from the steamy swamps of the South given their sound and subject matter, but Creedence...
Read more

After months of isolation, it may be time to adjust your habits—with flower by Lolo, prerolls from Jack Herer, and some Kwik Ease
Read more