By Tim Redmond
June 10, 2014
Share on FacebookShare on TwitterShare on LinkedInShare on RedditShare on Email 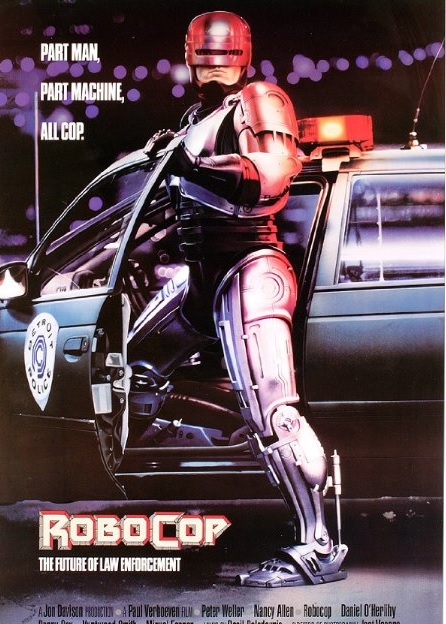 In the fall of 1989, when the producers of the hit sci-fi movie were preparing to film the sequel, Robocop 2, in Atlanta, they needed someone to drive the cop cars used in the movie from LA across the country. Thanks to my friend Kilian, who worked in Hollywood, I got in on the gig, which was useful since I was researching a book on the US environmental movement.

For a month, my co-author Marc Mowrey and I drove a Robocop car (actually, an otherwise unexceptional matt-black Ford Taurus) through the Deep South, interviewing environmentalists in some of the most polluted states in the country, and getting all expenses paid by the movie producers in exchange for getting their car to the set in one piece before filming started. Great deal. Made a lot of my book research possible.

But even without the car, I was already hooked: Robocop – the original movie, the first one, the 1987 classic starring Peter Weller – was one of the great movies of its time. Forget the effects and the drama; what really mattered was the message. For all its Hollywood hype as an action flick, Robocop – directed by Paul Verhoeven and written by Edward Neumeier and Michael Miner — was actually a parable about the evils of privatization.

There’s a chilling scene early in the movie, part of the set-up for the plot, where Weller, playing Officer Murphy, and his partner are heading for a nest of bad guys who are heavily armed, and they call in for backup.

A robotic voice says: “Backup will not be available for … 15 minutes.”

The reason? The city of Detroit has privatized its police force, turned the operations and management of public safety over to the Omni Consumer Products Corporation. And OCP isn’t the least bit concerned about anything except profit. Staffing has been cut, cops are left vulnerable, they’re talking about a strike, crime is rampant, and the whole thing is a social disaster.

So Murphy and his partner go in alone, and he gets shot to hell, and they put him in the “Robocop” program – for one reason. Machines are cheaper than people, and using cyborgs might mean even more profits for the corporation.

Oh, and when Murphy – his memory wiped – becomes Robocop, there’s a secret bit of code in his electronic brain that prevents him from arresting or in any way bothering … any officer of the Omni Consumer Products Corporation. Even though some of them are evil murderous drug dealers.

You can’t watch that movie without getting the late-1980s message: Turning essential public services over to the private sector is a really bad idea.

So my son and I watched the remake this week. I’m not a movie reviewer, but I have to say: Things have changed since 1987. A lot.

The remake has nothing in common with the original except the concept of turning an injured officer into a cyborg. OCP is still there, of course, but in the modern version, the spin is public safety: Corporate supporters in the news media say that robots can do a better job stopping the bad guys than flesh-and-blood humans.

The theme, such as it is, centers on the question of machine v. person, on how much of a human can be made into servos and chips before he ceases to be human, on how much emotions play into our humanity. That’s fine. It’s also been done many, many times before. And this effort is utterly unremarkable.

At its best (rare as that may be) commercial film (like commercial fiction of any sort) reflects something about the general state of the American psyche. The remake of Robocop will never be the hit the first version was; it’s just not a good movie. But the idea that a filmmaker can pretty much ignore the whole concept of a privatized police department bothers me. Does Hollywood think we don’t care about a corporate takeover of America anymore? Does that concept no longer mean “box office?”

Previous articleHow SF lets developers cheat Muni and affordable housing out of millions
Next articlePolitics on Tuesday: Deals on minimum wage, health-care accounts; something screwy going on with housing proposal