Returning home after the fire: There’s some heartbreak and some hope 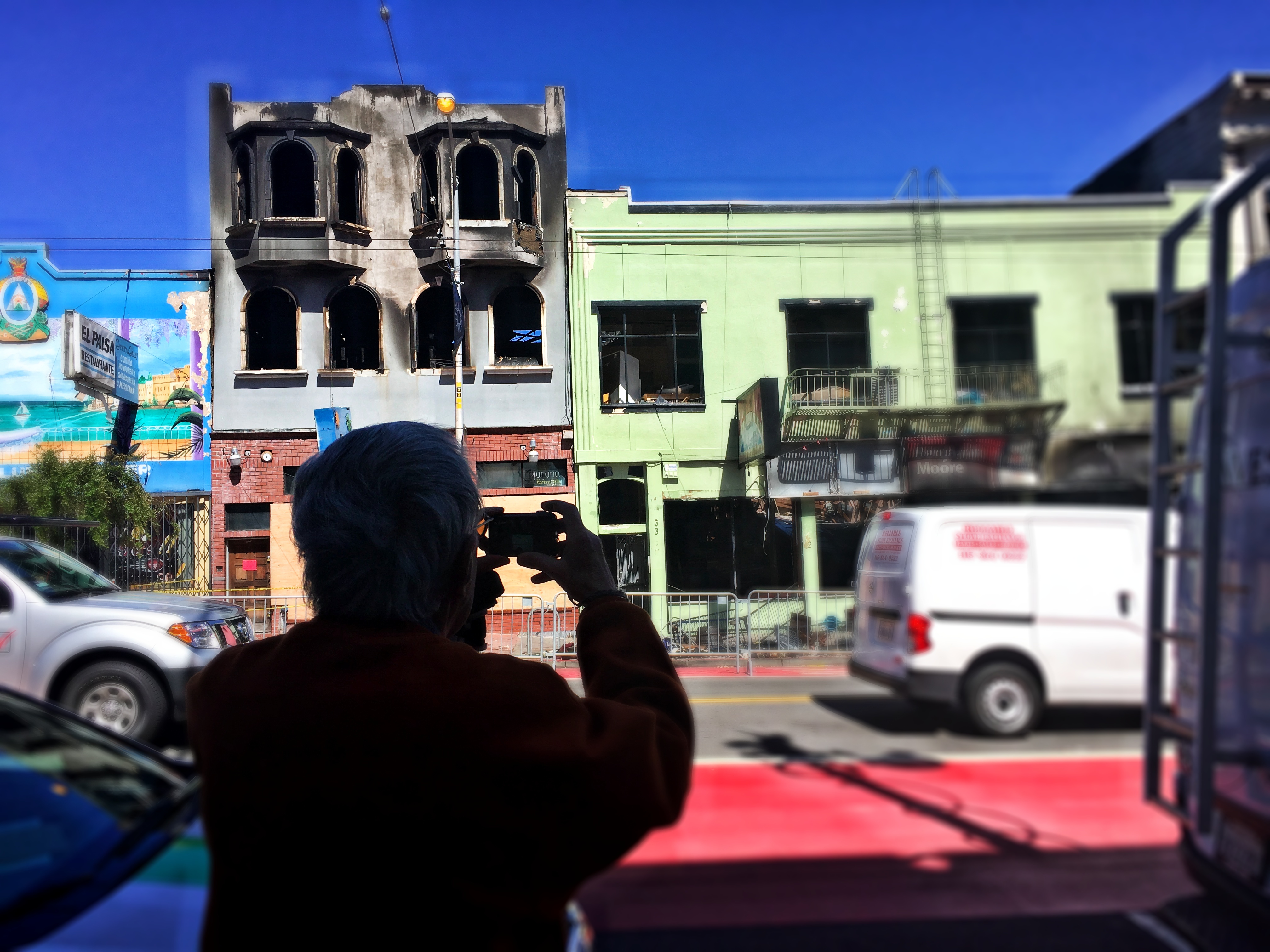 >> A fundraising party has been planned for the victims of the fire at El Rio on Thursday, June 30. Click here for more details.

Residents who were displaced from their homes in the Mission after the devastating five-alarm fire on Saturday were able to return to their homes for the first time Monday to get their personal belongings.

And there was some very good news: The Graywood Hotel, with 34 units, can be repaired and the tenants (in theory) will be able to return.

The charred remains of parts of Cole Hardware and the apartments above left resident Genesis Manyari devastated.

Manyari lived above the store and was paying $1,400 a month rent. “We have got no reassurance from the city, they told us that they are looking for housing for us but that it would be best for us to look on our own,” Manyari said.

She received the news after spending all day at the remains of the building she once called home. “The building is all burnt down, everything is fallen. I just feel like the city should do more, we haven’t even been told the cause of the fire, a lot of people are speculating that it’s not an accident and this is frustrating all of us,” she said.

Fortunately, residents of the  single residential occupancy units at Graywood Hotel will be able to move back in after the landlord hired a contractor to make the repairs. They will be allowed back in to get their belongings on Tuesday.

Tom Hui, director of the Department of Building inspection, said that two of the six buildings that burned with face emergency demolition.

“The hardware store and the restaurant will need to be demolished,” he said. The Graywood survived: “We were lucky we had the fire alarm system and the sprinklers that stopped the fire further into the building,” Hui said. “They need to hire a contractor to verify the electrical and gas” and the roof has some problems, but the place can be fixed.

That’s a huge deal for the tenants and for the community. Under local and state law, if a building is damaged by fire but repaired, the original tenants can move back in at the same rent they had been paying, and the place remains under rent control. If a building has to be demolished, the tenants have no such rights and a new building constructed on the site will have market-rate rents.

The challenge now is to make sure the landlord of the Graywood gets the repairs done in a timely fashion. The tenants may be able to find temporary housing for a few months, but if the construction drags on and on, some will be forced to leave town or find new permanent housing. That would allow the landlord to raise the rents to higher levels for new tenants.

Numerous tenants have filed complaints about the Graywood, including complaints that the fire extinguishers had expired and that the electrical system was faulty. But despite early reports that the fire had started with a fuse box in that building, city officials said it actually started next door.

“The fire definitely didn’t originate from the SRO because it had a firewall to prevent such accidents,” Hui said as he showed 48 hills some photos, on his phone, from inside the building. This was confirmed by SFFD spokesperson Jonathan Baxter who said that the fire originated in 3212-16 Mission St, the Cole hardware building.

Josh Arce, with the Laborers Local 261, said he wanted to be sure that the landlord hired the right contractors. “In situations like this where if the work isn’t done right it can lead to long-term displacement which could leave to permanent displacement of the tenants,” he said. “If we can advocate from our unions perspective that we have got the personnel ready to get out there and get the work done even on a volunteer basis,” it would help.

Shukri Lama, manager and part owner of the 3300 club, was hopeful after hearing that they will be able to return after the building goes through repairs, “As long as the building is structurally sound, we will be coming back. I think we are the lucky ones, we got a little bit of water damage but not much.”

Stephanie Wilson, who lived at the Graywood, is terrified of returning back home to get her belongings “They told me my kittens are in there, I don’t want to go in there I am terrified.” Wilson said she was informed that the fire department found charred remains of a cat in the building, and ever since the fire Wilson has barely eaten and has been visibly agitated. “My kittens are like children to me, I am too scared I don’t mean to shout at anyone but I am just too anxious right now”

Even though Wilson and other residents may be able to return home the road to recovery is long and painful as each one of them struggles to put their lives back together.

A new approach to homelessness

Screen Grabs: Welcome to the ‘Disneyland for seniors’

After misinformation and criticism, board approves next steps on Parnassus Heights campus plan -- but this is just the beginning.
Read more
News + Politics

A new approach to homelessness