Let us consider, for a moment, the cause of the fires that have devastated the North Bay and Wine Country.

The conditions were clearly ripe for a disaster — an unusually wet winter spurring lots of undergrowth, a hot and dry summer turning it all to tinder, and high winds that would drive the smallest spark into a conflagration. 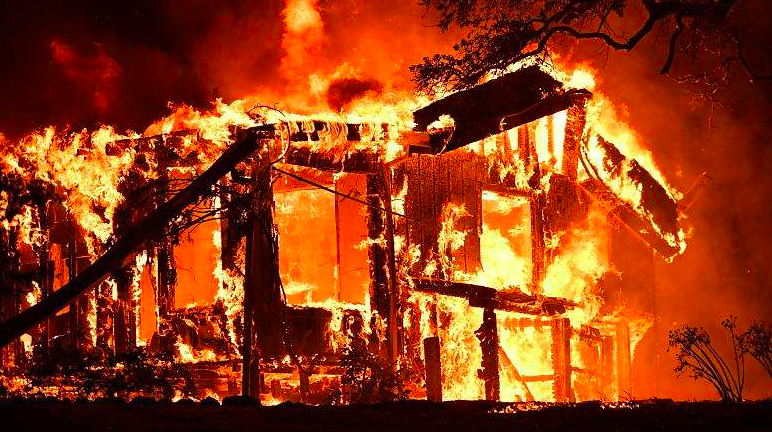 There’s no clear evidence yet as to what caused fires to break out, almost simultaneously, in several different areas. It wasn’t lightning strikes; it might have been people throwing cigarette butts out of cars, or dropping matches, or barbecues going out of control. Given the urban area, it wasn’t campfires.

It could, conceivably, have been arson — but that would have required a crew of arsonists hitting a broad geographic area all within a couple of hours.

Then there’s the possibility that the San Jose Mercury News has raised with a nice piece of reporting based on early 911 calls: right at the time the fires started, people all over the region were calling to report the PG&E lines were down and sparking:

In all, according to a review of emergency radio traffic by the Bay Area News Group, Sonoma County dispatchers sent out fire crews to at least 10 different locations across the county over a 90-minute period starting at 9:22 pm to respond to 911 calls and other reports of sparking wires and problems with the county’s electrical system amid high winds.

There is a certain logic here: The winds were high, and PG&E has a history of not maintaining its pipes and power lines — in some cases, leading to deadly disasters.

State law requires the utility to keep trees and brush away from its lines. But that hasn’t always happened.

In 1994, a fire broke out in the gold country town of Rough and Ready. Although nobody was killed, property damage was extensive.

The Nevada County district attorney filed criminal charges against the company. I was working at the Bay Guardian, and reporter Savannah Blackwell covered the trial.

The evidence that came out was stunning. While PG&E had a pack of high-paid lawyers, a single prosecutor, Jenny Ross, was able to show that the company had taken $80 million in money that the state had earmarked for tree-trimming work and diverted it to corporate profits.

Evidence produced in the trial also showed that between 1989 and 2004, PG&E lines touching trees had caused 760 fires and millions of dollars in property damage.

A jury found the company guilty — but of course, you can’t put a corporation in prison, so PG&E paid a fine. The executives who made the decision to divert the money to profits were not charged, penalized, or fired.

In 2015, a fire that destroyed 500 houses was caused in part by PG&E diverting tree-trimming money to executive bonuses, NBC reported.

So far, we know that 29 people are dead, 180 still missing. The property damage will run into many multiples of billions of dollars. The economic impact on the tourist economy in Wine Country will last for years.

The air quality in San Francisco is bad. In the North Bay and parts of the East Bay, it’s worse. People will get sick; some may die from respiratory illnesses.

This wasn’t a forest fire; industrial buildings, residential buildings, and cars have burned, releasing high toxic chemicals into the air. It will be years before we know the full health impacts.

And if PG&E was responsible — if the company diverted money from fire prevention to profits again — then a fine won’t be enough. Corporate executives who allowed this to happen need to be held accountable — personally accountable.

Again: None of us know what caused the fires. But if PG&E was at fault, it wouldn’t be the first time.