‘One Night in Miami’: a Black vision of freedom’s meaning 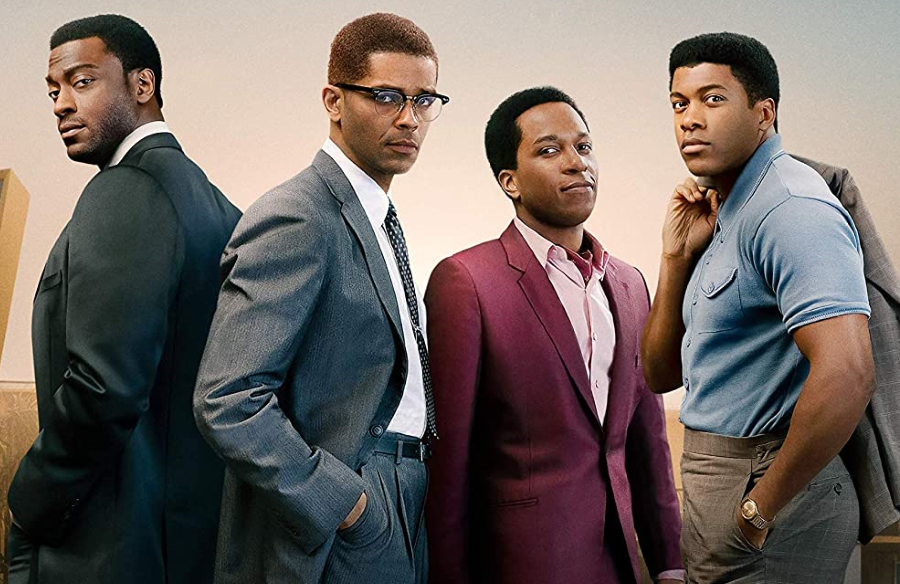 Dialogue is the plentiful CGI substitute for any budding first-time director. Look at the early work of Jim Jarmusch, Sophia Coppola, Wes Anderson, Gina Prince-Bythewood, Quentin… and of course, Spike. When the budget is tight, you gotta make words the oversized explosion.

In Regina King’s directorial debut, “One Night In Miami,” she does just that—to perfection.

Similar to her tour-de-force, Emmy-winning portrayal of “ask questions later” Angela Abar, the Tulsa police detective known as Sister Night in HBO’s “Watchmen,” King’s stinging commitment to minuscule detail remains based in humanity, the push/pull of candid explication. She brings out things you don’t want to hear, but deserve being aired.

Angela Abar, Black woman superhero, couched in heated intensity, felt as real as Vice President Kamala Harris smiling at Mike Pence, wishing him vaporized for his sleazy political tactics. Everybody understood where that heat came from. And King—over a hard-working 30+ year career as an actor inhabiting strong Black characters that shoot from the hip and establish tone and stakes—remains a master griot, now from both sides of the camera.

In One Night in Miami, adapted by Kemp Powers from his own play, King keeps four conversationalists firing at a clip, extra lively. Frank words and cut-throat philosophy battles issue from four iconic Black male figures engaging in barbershop timbre, over the course of a historic Miami night. Somehow the subject matter feels 2021 adjacent, and that’s King’s point.

On that night of Feb. 25, 1964, at the Convention Hall in Miami Beach, Cassius Clay beat the snot out of a culturally washed Sonny Liston. It was such a berating—Clay taunting and clowning him during rounds and between punches—that Liston, a known mob-stooge in boxing for years-spit out his mouth guard when the bell rang for round 8. He quit. No Mas. Making Clay on that night, who wasn’t quite Muhammad Ali just yet, the official peoples’ champion.

How so? With financial backing by white business investors from Louisville and the entire hopes and dreams of Black America in his corner, he became “Champ,” and answered to that name, in all parts of the world, until his death.

One Night in Miami is about that new Black vision of what freedom means, right after Liston coughed-up his pride. Clay’s friends, who caught the fight, “link-up” with him for a modest after-party that turns into an off-the-cuff discussion about stardom, political obligation, and what is required of Black nobility in turbulent times.

The host is Malcolm X, played by Kingsley Ben-Adir, of “High Fidelity” fame as a charismatic Black nerd leader, who sees that his time on the planet is running shorter than expected. Clay, played by Eli Goree, is studying Islam and getting to know Malcolm as a friend and confidant.

Joining the boxer and the minister in a humble suite at the Hampton House motel are the Cleveland Browns running back Jim Brown played cooly by Aldis Hodge and the singer Sam Cooke, convincingly characterized by Leslie Odom Jr. Four immortals of the culture, at the peak of their careers, staring at the crossroads. Brown, stymied with the ways Black athletes are exploited and leveraged, is looking to Hollywood. Cooke’s most recent effort to attract a pop, excuse me, a white audience becomes a flopped gig at the Copacabana in New York.

The central argument is based on Malcolm X trying to impress upon Cooke that he’s wasting his time courting a white following, by curating tireless make-out tunes built from a gospel foundation. Inspiring the culture—Black Culture—in song shall bring him endless renown. But the cheap kissy-kissy joints that afford Cooke fancy red sports cars, pricey smokes, and a flask full of booze at all times, are soulless pursuits. We are led to believe Cooke’s “A Change Is Gonna Come” is inspired from a heated exchange as the four friends analyzing Bob Dylan’s “Blowing In The Wind.”

The film, for the most part, retains its own heat. It doesn’t allow the intense conversations to spill over into lurid speculation. All four participants understand the image of unity is far greater than presenting their own personal philosophies to the late-nite Miami tabloids. This picture is kind; teleporting us back to a much more naive society, in certain stretches. The Black neighborhood in Miami feels protected. Residents feel no shame hitting up Cassius Clay and Sam Cooke in passing for booze money, and both heroes—still deep in conversation—are carefree about their success, passing it on with grace. Taking care of their community, even if they don’t know the names.

Kingsley Ben-Adir, who is left to wrestle the psychological weight of Denzel Washington’s surgical portrayal of Malcolm X on stage and screen, goes in the opposite direction with his rendering. We get a leader, who has lost faith in The Nation of Islam, paranoid with thoughts of the FBI and the NOI jointly spying on him (which we witness) and the overall doom of knowing he shall not be alive for that much longer. It’s a study deeply deserving of awards recognition.

But credit King for establishing this night as a turning point affair, during which these four celebrities saw themselves differently, as part of a broader movement. It was the beginning of another type of revolution. One in which Black Pride gained public momentum—as well as its white backlash, witnessed most recently in the January 6 invasion of the Capitol, a culmination of racist violence in response to the election of Barack Hussein Obama.

Plus: Up close to Kuti via 'Fela is Everything' and alt 1980s Argentine sound.
Read more
Music

'Having close exposure to Fela at such a young age was powerful and insightful,' says Fatsouls Records founder
Read more
Sponsored link