More
UncategorizedChevron and big ag are irrigating crops with oil...

Chevron and big ag are irrigating crops with oil wastewater

Oil company says the ‘recycled’ waste is perfectly safe. When have we heard that before?

FEBRUARY 3, 2015 — The San Francisco Chronicle ran a major investigative story on Sunday outlining how nasty waste from the oil industry winds up in Central Valley aquifers.

The story by David R. Baker detailed how state regulators have allowed oil companies in California, particularly in Kern County, to pump wastewater containing “a blend of briny water, hydrocarbons and trace chemicals” into underground water supplies, potentially contaminating water that could be used for drinking and irrigation

But if people in the Bay Area think that this is an issue only for farmers and residents in the hinterlands where oil production takes place, they need to think again.

The toxic effects of the disposal of oil production wastewater may be as near to you as the supermarket or your corner grocery. Here’s why: It’s an open secret that the big corporate agriculture landlords in Kern County are irrigating their crops with wastewater from oil production supplied to them by Chevron.

Do you eat potatoes, tomatoes, carrots, onions or bell peppers?  Do you like almonds or pistachios?  How about oranges, grapes or pomegranates?  Put a little honey in your tea?

These are all crops that are grown in Kern County, in the southern part of the San Joaquin Valley.

Do you eat beef?  Eggs?  Got milk?  These are also big Kern County agricultural products.

There is a lot of cotton grown in Kern County.  Do you wear any cotton clothes?

And they grow roses.  Makes a nice gift for your sweetie, don’t you think?

In total, Kern County produces over $3.5 billion worth of agricultural products every year, much of it irrigated by wastewater from Chevron’s oil well wells.

Chevron insists that that recycled water is safe, and in fact brags about how wastewater from oil development helps agriculture.

But farmers who live and work in the area aren’t so sure. And given the history of the oil and chemical industry’s environmental safety claims, there’s reason for at least concern.

I went on a tour of Kern County on Saturday, December 13. The tour was sponsored by the Center on Race, Poverty and the Environment.  Movement Generation organized the event. We left from Oakland, right by Oscar Grant Plaza, at 7 am, riding in three vans, heading for Delano of Cesar Chavez and the United Farm Workers fame.

Our first stop was the CRPE headquarters in Delano, a modest building near the center of town.  There we were introduced to community organizer Juan Flores, and to Gustavo Aguirre, the CRPE’s Director of Organizing.  Aguirre spent more than 15 years working in the fields, and 10 years working with the UFW.

Soon afterward, we hit the road. One of the first sites we visited was a place where Chevron’s oil operations wastewater is mixed with water destined for the fields.

You can go there, too. It’s right off Highway 99. Take the Highway 46 exit towards Wasco and Paso Robles. Go just a few yards, where you run into an unmarked canal. Drive or hike a little way south on the dirt road there.

Here is Chevron’s wastewater, which runs out of a facility run by Chevron off to the east, where many of the company’s oil operations are concentrated: 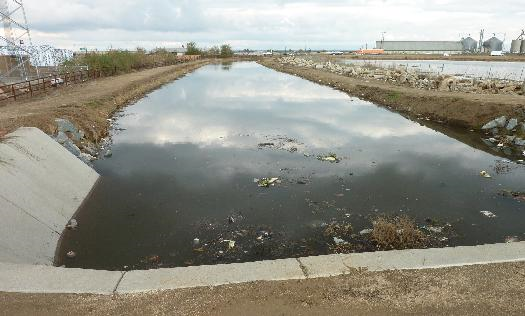 Chevron’s wastewater next flows under a small dirt dam, where it is mixed with clean water flowing in from the south.  Here is where the wastewater flows out from under the dam: 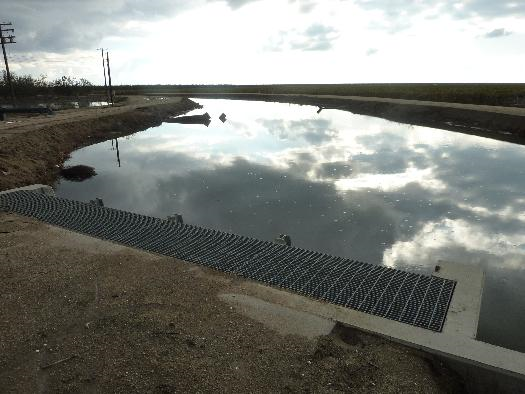 The clean water and the wastewater then flows under another dirt dam: 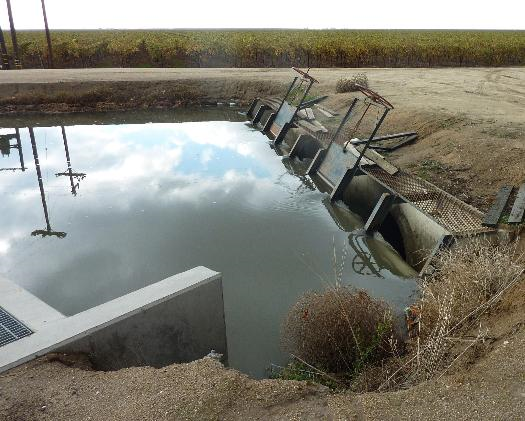 …comes out the other side here: 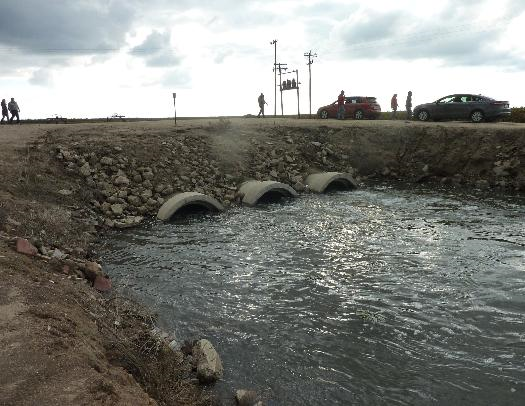 …and then flows off towards the fields in Kern County: 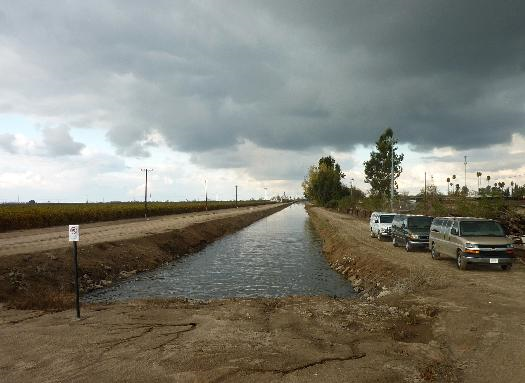 Here is a Google map of the area:

The canal coming in from the east carries the wastewater.  This wastewater flows under the small dirt dam, where it mixes with the clean (we hope) water flowing in from the south.  The combined stream of water then flows off to the north under the larger dirt dam, and is used to irrigate Kern County agricultural fields.

Juan, who took us to this site, asked if anybody was willing to take a swim in the water flowing off towards the fields.  There were no takers.

About then a white pickup truck pulled up alongside us, and we decided that it was time to leave.

The recent Chronicle article included a quote from Rock Zierman, the chief executive officer of the California Independent Petroleum Association.  “If we’re not able to put the water back [by injecting oil production wastewater it into the ground], there’s no other viable thing to do with it.”

But it is an open secret that Chevron has found another “thing to do with it,” viable or not.

An ad run by Chevron in the 2013 Bakersfield Californian reads, in part:

“For years, Chevron has been recycling the water that’s produced during our oil recovery process to provide area farmers with a reliable source of clean, local water.  Every day we deliver around 20 million gallons to Kern County’s farms, which helps them grow produce that’s exported all around the globe.”

Chevron even refers readers to a video you can watch about the company’s “recycling” operations. The video ends with the statement that “Chevron has stepped up to the plate.”

Very true.  Your plate, your meal.

Tom Frantz, a Kern County farmer who is featured in the Chronicle article, told 48 Hills that the water Chevron is providing “is still hot and oily when they start mixing or diluting it. We don’t know what toxic or hazardous chemicals are naturally in that water. The salt content is not too high and that is why they think it is ok to use it in a diluted form.

“Poisoning the soil on the surface is the same as poisoning the groundwater in my opinion.  The two atrocities cannot be separated.”

Chevron, of course, admits to no “atrocities” at all.  Cameron Van Ast, a Media Advisor for Chevron, told us that this water “is treated and/or blended to meet the regulatory standards required by the Central Valley Regional Water Quality Control Board and is also subject to mandatory testing and reporting requirements.”

Apparently, oil companies and regulators think that the toxic mix pumped into injection wells is perfectly safe, too.

Next:  Who is overseeing Chevron’s “recycling” operations?  Is it the same state agencies that have allowed the oil companies to inject wastewater into clean, underground water supplies?

If Gavin Newsom had shown some leadership, the terror that patients face could have been avoided.
Read more
City Hall

This old story is back, and it's still wrong: There are real, serious issues between the progressives and the corporate power structure
Read more
The Agenda

Plus: Housing nonsense in the Tenderloin, a Berniecrats art show—and who will replace Nancy Pelosi? That's The Agenda for Aug. 15-21
Read more
Sponsored link