APRIL 29, 2015 — Last September supporters of PDR (Production, Distribution and Repair) jobs — and the rule of law in San Francisco — thought they’d scored a rare victory, when the Planning Commission told the owners of the PDR-zoned property at 660 Third Street that it would not authorize their illegal conversion of the entire property to office space.

But more than seven months later, there are still office tenants in the space that is supposed to be limited to PDR, and the building manager is advertising office space for lease, as Planning officials struggle to get the owner to comply.

The Planning Department had originally recommended the ex post facto approval of the illicit conversion. Planning changed its recommendation after a May public hearing where community members, with land use attorney Sue Hestor in the fore, vehemently objected. A subsequent 48 Hills investigation found major discrepancies between reality and claims made in Planning’s staff report and the affidavit submitted by David Silverman, the Reuben, Junius & Rose attorney representing the owners.

In September, Planning changed its recommendation, urging the commission to approve only the office conversion of the two upper floors of the four-story building, specifying that the lower two floors, or 40,000 sf, should be rented out to PDR users.

(That half-a-loaf approach seems curious, until you realize that planners’ failure to challenge false assertions that Silverman made in his affidavit—he said the building lacked loading capacity—and in his testimony to the Historic Preservation Commission—he said the building was vacant, because it was impossible to find PDR tenants—expedited the building’s landmarking, legally qualifying it for full conversion into offices.)

On September 11 the Planning Commission majority went along with the revised staff recommendation.

Four days later, SoMa Leadership Council President Jim Meko emailed planner Richard Sucré asking if the department had “any figures on what the occupancy of 660-3rd Street currently is,” adding: “I look forward to following what if any enforcement will be required to bring the building into compliance with Thursday’s resolution.”

Currently, the entire building is occupied by office tenants [now he tells us]. Since we have an approved action from the Planning Commission, our enforcement team will be working with the Project Sponsor to bring the building into compliance.

I’ve copied the head of our enforcement division, Christine Haw, on this email who can provide you with additional information on the enforcement process. Currently, the entire building is occupied by office tenants. Since we have an approved action from the Planning Commission, our enforcement team will be working with the Project Sponsor to bring the building into compliance.

Meko, replying to Sucré and Haw, wrote: “[T]he bottom line is that they’re going to have to vacate two entire floors, right?”

“We’ll investigate and check the square footage of the floors prior to any determination.”

But then the enforcement process failed to proceed.

In early March, Hestor’s challenge to another illegal PDR-into-office conversion—this one at 340 Bryant—made me wonder what had transpired at 660 Third Street.

A visit to the latter property revealed that six months after the Planning Commission action, the lower two floors were still occupied by two office tenants and a furniture retailer.

On March 13 I emailed Haw, asking “why the illegal office (and I believe, retail) uses are still active on the ground floors.”

A week later, having received no reply, I queried Zoning Administrator Scott Sanchez. Sanchez told me to contact Planning Communications Manager Gina Simi, which I did.

“At this time, the Department is still working with the property owners to bring them into compliance. If you’d like to check back with us in the coming weeks, we’ll be happy to provide any updated information that we have.”

On April 22, I checked back. Two days later Simi informed me that on April 2, the Planning Department had issued a Notice of Violation. The NOVP, as it’s familiarly known, states:

On November 25, 2014, Dario Jones, Enforcement Planner conducted an interior site inspection of all stories in conjunction with Mr. James Reuben, attorney for the property owners. Aside from the basement, the site visit confirmed that all stories of the building are occupied by office uses.

To correct the violation, the Planning Department required the owner, Orb Partnership c/o Rabin Worldwide Inc., “to immediately proceed to cease and desist all office uses located below the third-story” and, in order “to prevent further enforcement action and avoid accrual of penalties,…to provide adequate evidence to demonstrate that either no violation exists or that the violation has been abated.”

Orb Partnership/Rabin Worldwide, Inc. had 15 days from the April 2 date of the notice either to correct the violation or to appeal the NOVP. Beginning on the following day—by my calculation, April 18—“administrative penalties of up to $250 per day” would begin to accrue. The NOVP says that “the penalty amount shall be paid within 30 days from the final date of the Notice of Violation.” The Planning Department also charged Orb a fee of $1,238 for Time and Materials to cover the cost of correcting the Planning Code violations.

According to Simi, as of Monday, April 27, Orb Partnership/Rabin Worldwide had paid no penalty.

As of Tuesday, April 28, the building’s property manager, Polatnick Properties, was running an online ad that described the spaces on the first and second floor as offices. 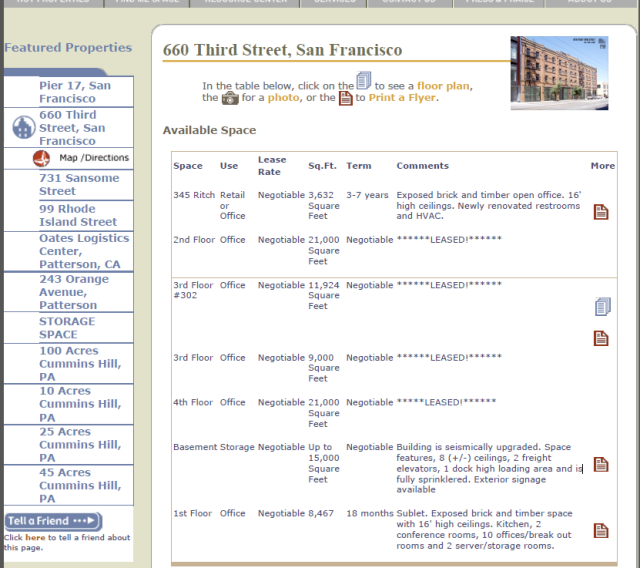 Rabin Worldwide, founded in San Francisco more than 60 years ago and still run by the Rabin family, is one of the world’s largest industrial auction houses—which is to say, liquidators—with an office in Manchester, England, as well as in SF. To this multinational corporation, the financial penalties associated with its violation of the city’s Zoning Code must seem like very small potatoes.

And viewed in isolation, Rabin’s offense at 660 Third Street looks like small potatoes, when it’s compared to some other violations of the Zoning Code—say, the Academy of Art’s rampages around town.

But the lawbreaking at 600 Third Street and, what’s more relevant, the Planning Department’s failure to enforce the city’s land use laws at that address, especially those relating to PDR, should not be viewed in isolation. They should be viewed in the context of the planners’ habitual inability and/or unwillingness to protect the city’s industrial lands, and their more general failure to enforce the Zoning Code—a double dereliction that plays a major role in the continuing drastic shrinkage of San Francisco’s industrial sector and the blue-collar jobs that go with it.

In the interest of returning to 'normal,' the US is ignoring the crisis of Long Covid
Read more
Movies

The NYTimes says yes—but even the Chron agrees that the data shows these units are not a very effective way to address the housing crisis.
Read more
Housing

Blame cities for the market-driven crisis, then enshrine the market imperative in law.
Read more
Housing

... and then supports two bad housing bills that do the exact opposite. And they want my money.
Read more
Sponsored link

For 50 years, SF mayors and their allies have pushed highrise office space, destroying anything in its path. They were wrong, and now we are paying the price.
Drug policy

New supe says he isn't familiar with the issues, makes no commitments for change.