The new jail is on the fast track

By Tim Redmond
November 30, 2015
Share on FacebookShare on TwitterShare on LinkedInShare on RedditShare on Email

Board decision is imminent — although it’s not even clear that this $240 million project is needed. 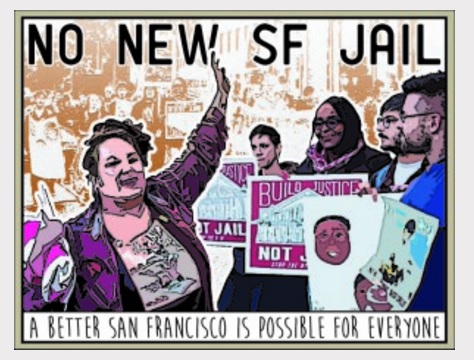 DECEMBER 1, 2015 – The Mayor’s Office is asking the supervisors to approve on a very fast track a plan for a $240 million new jail that may be far bigger than the city needs – if San Francisco even needs a new jail.

A measure that would close the purchase of a site by February 2016 and start construction shortly after that appears on the agenda of the Budget and Finance Committee Wednesday/2.

The supes agreed earlier this year, some of them reluctantly, to apply for $80 million in state money for the jail – but it was clear at the time that no decision had been made on whether to move forward and that the city might not need or accept the money.

But on Nov. 13, San Francisco officials were informed that the grant was approved, and since then, this thing has been moving forward quickly.

The mayor wants the board to approve a plan that would allow the city’s Real Estate Department to buy four parcels near the current Hall of Justice “for fair market value” without coming back for approval from the supervisors.

That’s because the city, under the terms of the state grant, has to finalize a deal for the jail site within 90 days after the grant was issued. A report by the Budget Analyst’s Office quotes city officials as saying there won’t be time to negotiate and close the deal by February if it has to come back to the board for approval.

The jail – described in official documents as a “rehabilitation detention facility” – will include 384 beds. The existing jail facility, which is part of the seismically unstable Hall of Justice, would be demolished – and good riddance: The ancient jail is inhumane.

But the Controller’s Office has estimated that the city might need as few as 120 new beds, since the Sheriff’s Office and the courts have been working on alternatives to incarceration.

As many as 75 percent of the current inmates are behind bars entirely because they can’t afford bail. Many others have mental-health issues.

Bail reform and better mental-health services might make a new jail entirely unnecessary – and with better policies, it’s hard to argue that the city will need this many jail beds in the future.

And we are talking about a long-term project here, one that with interest will cost the taxpayers more than $300 million. Is it really a good idea to plan for a future where San Francisco will be locking up as many people as it does right now? Isn’t it possible that we will come to our senses over the next 30 years, and that much of this fancy facility will be empty?

Never mind: The committee is set to vote on a plan to authorize the sale of $215 million worth of “certificates of participation” – a way of raising money by selling the equivalent of bonds without a vote of the people – and the full board could wind up approving this next Monday.

When you add in the state grant and factor in interest payments, the nut for the new facility is $240 million.

The Youth Commission asked that the hearing be held later in the day, when young people could show up and testify. That was denied.

Opponents of the jail point out:

It is critically important that the Board postpones this vote. Supervisors [Jane] Kim and [London] Breed have requested a special hearing on alternatives to jail construction. Supervisor [David] Campos has requested a budget and legislative analyst report comparing costs of providing mental health services in the community vs. inside the jail. Lastly, law firm Equal Justice Under the Law has filed a federal lawsuit against the City and County to dismantle San Francisco’s money bail system, which could dramatically reduce the number of people incarcerated pre-trial.

I don’t think the city’s had a serious discussion at any point on whether this entire project is a good idea. But that’s the way these things work.

First, the city applies for a state grant – promising the supes that submitting the application is in no way a final decision, that agreeing just to ask for the money doesn’t mean we are going to move forward with the project.

Then the state says yes – but insists that the project move forward really fast. And now the supes are told to get on the stick, stop wasting time with the larger questions, and say Yes – or lose $80 million.

And suddenly a decision that was at best very tentative is almost a done deal.

Building an expensive new jail is a big decision, not just financially but as a matter of criminal justice policy. Is mass incarceration going to be part of our future as a city? Is there a better use for that money (which will come out of the General Fund)?

You can’t really turn a jail into much else without spending a whole lot more money. What if this is all a big mistake?

The problem is that none of those questions are on the agenda for the meeting. It’s all about approving the COPs and the budget. It’s all about the state money (that the supes weren’t even sure they wanted) getting used as an excuse to force the city to move way faster than it should.

I guess I should have seen this coming. So many major decisions get made this way. But it’s still a bit of a shock.

The meeting starts at 10am in the Board of Supervisors chamber. A protest will follow on the steps of City Hall.