Avalos crafts compromise that even the sheriff could accept 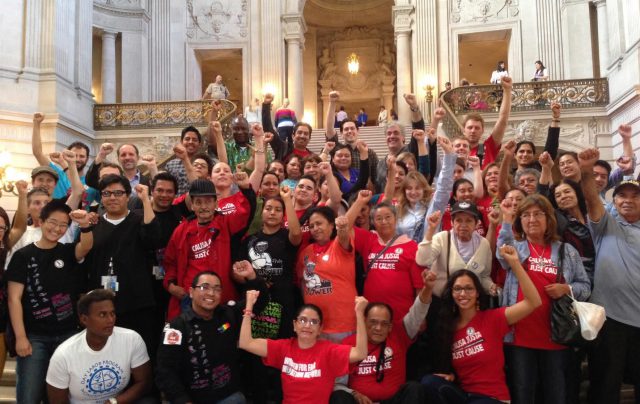 Sup. John Avalos won approval for his updated Sanctuary City law today, and in the end, after months of heated argument (and opposition from the mayor and the sheriff) the result was anticlimactic.

Avalos had managed to engineer a compromise that everyone accepted, and the measure passed unanimously.

The new law allows the sheriff a little bit more discretion in deciding whether to call federal immigration authorities and let them know that an inmate in the local jail is going to be released.

That notification allows the feds to show up and grab the person upon release, and typically leads to deportation.

Avalos opened the discussion by saying that the criminal justice system in a sanctuary city like San Francisco works best when local law enforcement and federal immigration authorities operate as separately as possible.

The problem: If immigrant communities think the local police or sheriffs are going to turn them over to Immigration Control and Enforcement, they aren’t going to report crimes, help with the investigation of crimes, or in many cases even go to hospitals or other public facilities. Entire communities live in fear of ICE, and that’s bad for everyone in San Francisco.

There’s also the problem that a lot of immigrants come here, often without legal paperwork, from places where they might easily get killed. Avalos mentioned Berta Caceres, a Goldman environmental prize winner who was assassinated two months ago in Honduras, to remind his colleagues that coming to the US is often about staying alive.

Still, the new sheriff, Vicky Hennessy, ran for office in part on a platform of changing the policy of her predecessor, Ross Mirkarimi, who was blamed for the death of a young woman at the hands of an immigrant who was released from SF county jail.

The incident created a sensational media furor, with Fox news using it to attack the city in general and the Sanctuary City law in specific. Mayor Lee blasted Mirkarimi, who was actually following the existing law, saying that he should have called the feds and turned the suspect over for deportation.

Avalos worked for weeks to come up with something that Hennessy could live with, and the new law would allow her to contact ICE if a person who is about to be released, and has an immigration hold, has been convicted of (or been held for trial on) serious felony charges in the past five years.

Hennessy even showed up at the board meeting to express her support, and the board approved the measure 11-0.

Since the mayor will almost certainly sign it, that puts the entire city behind a policy that immigrant-rights groups helped draft and were involved in crafting at every step of the process.

It also puts SF back where it should be, in the forefront of efforts to protect immigrants and defy the feds whenever possible.

But is opposing the Big Business and Big Tech Agenda really 'conservative?' Plus: Free Muni --and a complex new Muni yard. That's The Agenda for May 10-18.
Education

The school promised $35 million to the community. Now, a battle over an obscure legal concept has the supes and the College Board at odds.

In Halston, the new biopic about the visionary American fashion designer, director Frédéric Tcheng makes every effort to remain objective when portraying the contentious...
News + Politics

Elected officials, labor, and community leaders say that the DA has kept his campaign promises.
Housing

Hundreds of millions in federal funding is available -- but tenants aren't getting it.
Homelessness

If you are older and need to go, the Bay Area is not always a pleasant place.
Read more
Education

Teaching Behind the Mask: Antonia Velegas and Maki Matsunami team up to build bridges and educate young children in a challenging environment.
Read more