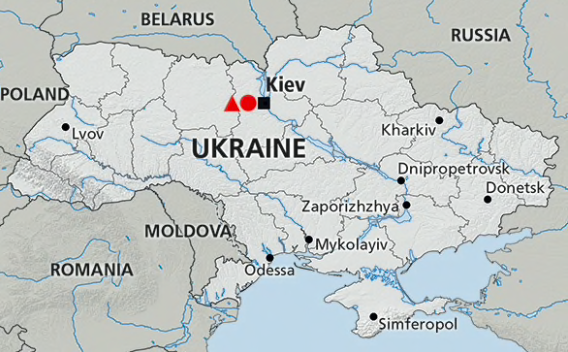 Ukrainians can chose a crook or a clown as their new president. So far the clown is winning.

Volodymyr Zelensky, a prominent comedian without political experience, received 30 percent of the vote in a multi-candidate election last Sunday. Incumbent President Petro Poroshenko, a corrupt oligarch, came in second with 16 percent. They face a runoff election later this month.

Like Donald Trump and comedian Beppe Grillo in Italy, Zelensky capitalized on his entertainment fame to run as an outsider staunchly opposed to corruption. Zelensky campaigned as if he was the character in his hit TV series, according to Nicolai Petro, a political science professor at the University of Rhode Island.

“He’s just an average guy who runs into increased corruption,” Petro told me in a phone interview. “He maintains fundamental honesty, and that’s what he’s saying as a political candidate.”

The election comes at a crucial time. The dispute over Crimea continues, and Russian troops back armed insurrection in eastern Ukraine. The conflict has killed 13,000 people and displaced millions.

Conflict between Russia and the US is also heating up as both sides compete for profits and spheres of influence in the region. And, interestingly enough, the conflict is connected to the Russiagate scandal. More on that in a bit.

During a reporting trip to Kiev on a blustery winter day I saw more than 5,000 young people waving huge yellow and blue Ukrainian flags as they converged on the city’s central square. They had just forced the prime minister to resign.

“It’s a great victory,” one student told me. “It’s a day I will remember all of my life.”

The year was 1990, when Ukraine was still part of the USSR. Ukrainian nationalists were convinced that forming a separate nation would lead to democracy and economic prosperity. It didn’t work out that way.

Ordinary people in the USSR were legitimately angry at the government and Soviet-style socialism because of a lack of housing, food and quality medical care. But opportunist leaders, backed by various western countries, manipulated that anger for their own power and profit.

Ukraine had the second largest economy among the Soviet republics with abundant natural resources, industry, and a rich agricultural base. A Soviet pipeline carried natural gas through Ukraine to western Europe. Nowadays, both the US and Russia seek to dominate Ukraine for geo-political reasons, according to Lev Golinkin, a journalist and memoirist born in Ukraine.

“The US considers Ukraine to be part of Russia’s backyard,” he told me in a phone interview. “The US believes that if you can turn Ukraine into a western democracy, then Russians will want the same.”

Russian officials have the same concerns, only in mirror image. Russia doesn’t want Ukraine to join NATO and have hostile troops posted along its border. Vladimir Putin often talks about combating discrimination against Russian speakers living in Ukraine.

“Putin has positioned himself as a protector of the Russian world,” said Golinkin.

In 2013 elected President Viktor Yanukovych angered western powers by blocking plans for Ukraine to associate with the European Union. Ukrainians returned to Kiev’s central Maidan Square to protest against Yanukovych.

These demonstrations, dubbed the Maidan Revolution, included strong participation by Svoboda (Freedom), an anti-Semitic, pro-fascist political movement, as well as oligarchs bent on installing themselves in power.

The Obama administration played an active behind the scenes role in choosing Ukraine’s new leaders, as revealed in a tapped phone conversation between two high level US diplomats.

“Talk about meddling,” said Golinkin. “They are talking like corporate managers and the country is theirs.”

Russia retaliated by instigating an independence movement in Crimea, a key region of Ukraine populated mostly by ethnic Russians.

In Russia’s view, “the Crimean parliament had the right to self determination,” said Professor Petro. Crimea voted by a 95 percent margin to leave Ukraine and join Russia.

The US denounced Russian aggression and imposed harsh sanctions. Russia has weathered the storm, however, and Ukraine continues to face a low intensity war.

During the 2016 US presidential campaign, Donald Trump opposed pretty much anything Barack Obama supported. Obama had made Putin into a major US enemy. Trump promoted a right-wing isolationism that included sympathy for strongman Putin. The Obama administration imposed sanctions on Russia over the issue of Ukraine. Within days of taking office, Trump explored lifting those sanctions.

The possibility of warming relations with Russia freaked out the Washington establishment. FBI Director James Comey initiated a secret investigation of the Trump presidential campaign. I think officials such as Comey and CIA Director James Clapper used the claims of Russian manipulation of the US election as a cover to prevent warming of US-Russian relations.

Mainstream Democrats jumped on the anti-Russia bandwagon and attacked Trump from the right. House Speaker Nancy Pelosi infamously said, “It seems that Putin is Trump’s puppeteer, and that House Republicans have decided to join the charade.”

Imagine if a progressive Democrat wins the 2020 presidential election and adopts policies opposed by the Washington establishment, say withdrawing US troops from South Korea. Would the FBI investigate Bernie Sanders for colluding with North Korea?

“Senior political appointees can really undermine the president’s policies,” he said. “I’ll give you three words: The Deep State.”

Presidential candidates Zelensky faces Poroshenko in a runoff election April 21. Zelensky has expressed willingness to negotiate with Russia while Poroshenko has publicly refused. Right wingers in Ukraine oppose any reconciliation with Russia and will seek to prevent talks no matter who wins.

As the world has seen, independent outsiders have a much harder time governing than campaigning. Nevertheless, a peaceful resolution of the Russia/Ukraine conflict is essential. Let’s hope that either side can make some headway.

Reese Erlich’s nationally distributed column, Foreign Correspondent, appears every two weeks in 48Hills. Follow him on Twitter, @ReeseErlich; friend him on Facebook; and visit his webpage.