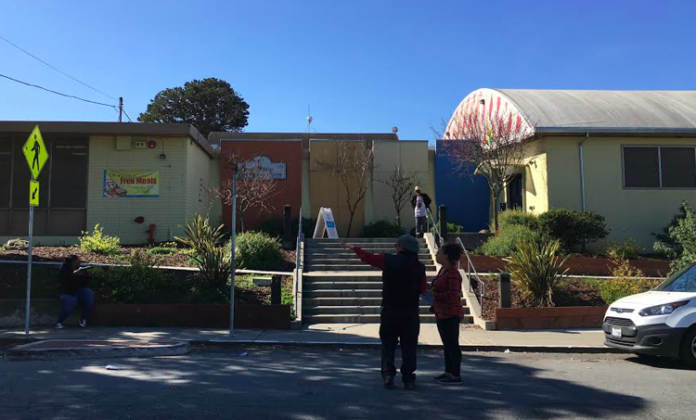 Although no rain fell in San Francisco in February for the first time since 1878, Dalila Adofo and Anthony Khalil of Greenaction have another element in mind: air. Joined by several other Bayview community activists at Bayview Plaza on Third and Evans at 10am on a recent Wednesday, they spent the next several hours visiting proposed sites for the Marie Harrison Air Monitoring Network.

The practice of putting sewage treatment plants, major highways, wastewater facilities and other polluting industries near low-income communities of color has left its mark in the Bayview. Despite local, state and federal data indicating air quality issues, no real change has occurred, and asthma and cancer rates in Bayview remain the highest in the Bay Area. But with the advent of affordable (and more reliable) air monitoring devices, communities like the Bayview are taking the science into their own hands.

The air monitoring network, Dylos machines costing $400 each, will target particulate matter, or PM, from a size of ten micrometers (PM 10, which includes dust from crushing or grinding operations) to the finer two-and-half micrometers (PM 2.5, created by different forms of combustion, from motor vehicles to forest fires.)

Adofo and Khalil hopped in Khalil’s white Toyota highlander to start the tour. Khalil, in a black North Face fleece with dreads hanging from under a grey cap, and Adofo, in an orange flannel, were energized and well-prepared for the day’s activity. As defenders of low-income communities of color, they know they have to be.

“We’re going to have as much official sign-off and as many experts come look at our sites as possible,” Adofo said. “We’re in conversation with BAAQD and CARB so they can assist in collocating. We’re hopeful for a lot of support to make this as accurate as possible.”

From Bayview Plaza Parking lot, they drove by the Bayview Main Post office, Speak Easy Brewery, and the PG&E substation, past shiny new buildings on the corner of Cataline and Fairfax and then Malcolm X Middle School, where Khalil recalled speaking to students a few years ago.

“We had to tell the kids what it means to have a power plant right in front of you – this is the air we breathe,” Khalil said.

The first proposed site is near the corner of Fairfax and Acacia by the Hunters View Property Office. The view east includes the PG&E substation, piles of sand and gravel looming near the bay like a mountain range, and the groan of diesel trucks from a working seaport. It’s easy to imagine a steady westerly wind blowing all of that industrial air right into our lungs.

“You’re not going to see this level of industry activity so close to residential in any other part of the city,” Khalil said.

The group exited the vehicles with clipboards and cameras, and the complexity of the project became apparent. A two-sided handout, “Instructions for Monitor Assessment,” designates roles (a note taker, a photographer) and defines terms for another assessment form (air pollutions sources such as busy roadways, industrial facilities, incinerators, etc.)

A few group members pointed out the numerous police cameras in the neighborhood, possible power sources for air monitors, but then it’s agreed they are too high up and could be dangerous for a technician.

Like laws guiding electric scooters, rules guiding air monitors have to catch up to the technology. The federal guidelines, scheduled for an update sometime in 2020, offer some tips (“Extreme temperature and relative humidity can affect sensors. Is there evidence of animals or insects interfering with the measurement?”) and Khalil and Adofo rely on the work of nearby communities for guidance, as well.

“Our sister cities like Richmond and West Oakland have similar land-use issues, but they are at different stages of monitoring,” Khalil said. “The West Oakland Indicators Project is a trail blazer in terms of community-based air monitoring. The guide map is still being written, but they have a lot of best practices recommendations.”

As far as getting data rejected and assuring quality control, Adofo said they are doing everything they can to avoid that scenario. “We want the data to be as accurate as possible. It’s all in the conversion equations that we have to keep in mind as we collect the data.”

After considering a site near the Boys and Girls Club, the group continued down the hill past Parcel E, near Earl and Kirkwood, a notorious spot that highlights just how badly Bayview has been treated in comparison to the rest of the Bay Area. It was here in 2000 where a toxic fire burned for at least a month, by some counts much longer.

Driving along a stretch of bay wetlands, Khalil, who studied wetlands ecology at SF State, noted how this stretch is just as important ecologically as the wetlands on the other side of San Francisco. But this side has been paved over, dumped on or destroyed, not protected.

The third stop, near Oakdale and Third, was busy withcar traffic, so a whole different kind of monitoring will be necessary.

“Districts are supportive of this type of air monitoring, and we want communities to be successful with these projects,” Michael Flagg of BAAQD said by phone after the tour.

Monitors have been around for some time, he said, but AB 617 has started to deploy more on a relatively large scale across the state. “Generally speaking, there are more monitors available. There has been variability in measurements, but we’re understanding that variability more, so there’s more robust interpretation of the information.”

Flagg said that while there’s no “best” community monitor out there, there are different monitors for different methods. “They (Bayview) are using lower cost sensors that can be deployed in a dense network. That’s a good choice for that purpose.”

“We will continue to provide technical support to make this successful.”

Back at Oakdale and Third, a member of the group said they were happy to see some economic development going on. The group, who all live or work in the Bayview, agree. They want development and economic opportunity for their community, just like other communities. They just don’t want to be forced to choose between that and clean air.

The fourth stop, on Bayshore Avenue underneath the colossal, concrete crisscross of 280 and 101, was as loud and clear a call for air monitoring as the hundreds of cars roaring past every minute.

We continued past the Southeastern Pollution Plant to the fifth possible location, near Brette Hart School. While members of the group enjoyed a lunch of fish nuggets from Two Jack’s, Khalil reflected on the work that has been done, and the work that lies ahead.