More
UncategorizedSoccer, Airbnb, and the colonization of the Mission

Soccer, Airbnb, and the colonization of the Mission

By Tim Redmond
October 13, 2014
Share on FacebookShare on TwitterShare on LinkedInShare on RedditShare on Email 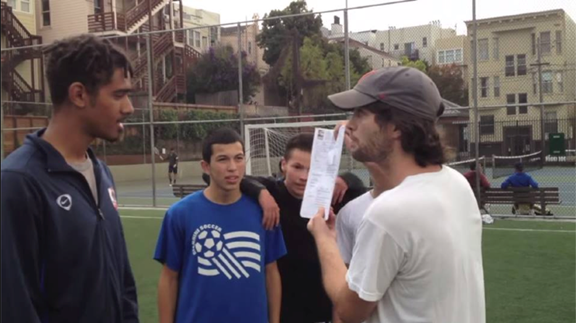 OCTOBER 13 — By now the video of the young white “Dropbox Dudes” kicking the youth of color out of the Mission Playground has traveled the world with virality.

In part, it has captivated such a broad audience because it touches upon the settler-colonial nature with which dispossession occurs, not only San Francisco but in a myriad gentrifying spaces. In the video, we see entitled young white men, one donning a Dropbox t-shirt, telling youth of color they have to leave a soccer field. The white men claim they have the right to because they have obtained a permit.

One of the men shows them the permit, ushering them off the field. As one youth contends, for 20 years people have playing soccer in that field without a permit. Now, suddenly, these “techbros” (one of whom has been in the city for one entire year), have the right to the space for an hour, per a piece of city-granted paper.

As Columbus Day descends upon us, there is a harsh likening to deeds granted by European royalty of old to the New World to the colonizers of the fifteenth and sixteenth centuries. Instead of getting to know the existing culture of the seven-on-seven pickup games in the park and slowly integrating, these newly arrived settlers seek to bypass existing culture altogether, claiming sovereignty through access to government — and an app.

Dropbox, one of the many new tech companies stationed in San Francisco, has a 200,000 square foot headquarters in China Basin, and is expanding into 182,000 square feet at 333 Brannan (which probably could fit an indoor soccer field). However, this is not the only corporation to focus on when analyzing the political economy behind the cultural take-over of the Mission Playground.

As it turns out, according to Valleywag, the game was a corporate match between Dropbox and Airbnb.  The man with the permit is an Airbnb employee named Conor Welch, Valleywag notes. Our research found Welch on the Airbnb site, described as a Community Support worker.

Airbnb, the leading corporation behind the so-called housing “sharing economy,” is being abused throughout the city not by those who want to share, but by those who desire to profit, often by displacing tenants. As the Anti-Eviction Mapping Project’s “Sleazy 16: Short Term Rental Hosts Displacing Tenants for Tourists” reveals, there are hoteliers such as Lois Wong with as many as  33 listings on Airbnb, and Ellis Act evictors such as Fergus O’Sullivan, all profiting through the short-term rental market.

Airbnb as a company has dragged its feet in paying hotel back taxes and in addressing the amount of evictions that participation in the sharing economy precipitates, and instead engages in “Fair to Share” propaganda. Yet, the sharing economy here seems reticent to share.

While the one employee does not represent the company that he works for here, it is ironic that he holds a permit proving his right to “share” the park, when Airbnb hosts have notoriously evaded obtaining the necessary permits to “share” their homes, second homes, and so on. While abuse of the sharing economy contributes to the eviction epidemic plaguing San Francisco, forcing longtime residents out of their private homes, the privatization of public space in the city is now kicking longtime community members out of the playgrounds and commons.

It is curious that the techbro dudes had obtained a permit to utilize the playground.  While the video went viral in October, it was actually shot two months earlier. And, as of July 2014, Mission Playground had not yet been listed by the Park and Rec Department as a playground in which one could obtain permits. A communications from the Park and Rec Department on July 2nd revealed that they were “working on getting [their] website corrected to add Mission Playground.”

There had been three community meetings in July 2009 led by Bob Palacio and Patrick Hannan to discuss the pay-to-play reservation system. This was after the San Francisco Recreation and Park Department, in partnership with the City Fields Foundation, largely run by the Fishers (Gap) and Charles Schwab, announced the renovation of the Mission Playground to be funded by taxpayers and the Foundation, with private contracts, for $7.5 million.

In the first of the three scheduled meetings for public input, residents did indeed express concern around the proposal of pay-to-play reservations during peak hours. A second meeting was held for which no records could be obtained. Records from the third meeting indicate simply that the matter of fees and reservations had been resolved. In 2012, Mission soccer players petitioned the city over the pay-to-play policy, rebuking that groups such as SF Pickup Soccer (which uses the app Meetup) would have more access to the Mission Playground than those who had been playing there for 25 years.

So here we have a collusion of old and new money forcing longtime soccer players, largely youth of color, off of the field and out of the public. While Fisher and Schwab call the shots from above as to how the commons reshape, those with the right apps and permits enact their sovereign right to occupy the space. As colonial history has revealed time and time again, those who privilege in such scenarios are always already privileged. But, as the video beautifully shows, there is resistance. And it is growing.

There will be a rally at 9am on Thursday in front of City Hall, organized by the Latino Democratic Club, before the Parks and Recreation Commission’s opening public comment.

If you can’t make it on Thursday, you can submit public comment beforehand, and it will still go into the public record. Email comments to recpark.commission@sfgov.org and cc edwin.lindo@gmail.com from the Latino Democratic Club, organizer of the action.

Previous articleWill the “growth wars” ever end? Well, maybe not
Next articleThe Bay Guardian shuts down