More
Uncategorized Race, staged: Whiteness examined in 'For the Glory'

Race, staged: Whiteness examined in ‘For the Glory’

Performance artist/dancer Mica Sigourney’s new work “For the Glory — A Solo about Whiteness” comes to Counterpulse Jan. 30 and 31.

JANUARY 27, 2015 — It’s disappointing that the major racially-charged incidents of the past couple years in America have yet to find voice on our major stages. Art is long, however, and sometimes it takes a while to get where we need to go. (I’m sincerely hoping performer/documenter Anna Deveare Smith is compiling something about Ferguson right now.)

But at least our more adventurous stage artists are beginning to respond in some fascinating ways. Mica Sigourney is one of the true boundary-breakers left on the San Francisco performance art/dance scene, an heir to a long and generous line of spirits who have fearlessly mixed things up in order to provoke major, necessary conversations. There’s a vibrant edge of discomfiting comedy to his work — as one of the city’s most prominent drag queens (his “day job”), Sigourney knows how to strip things bare with a look, and send up what lies beneath.

This weekend, Sigourney’s premiering a new work “For the Glory — A Solo about Whiteness” that’s sure to have plumb some intriguing depths. No one can accuse the show of puny ambitions: “Racism, whiteness, colonialism, erasure, amnesia, invisibility, attribution, and appropriation” are all on the menu of topics explored.

“You can expect humor. And you can expect complication, hopefully,” Sigourney told me. “In my work I’m always compelled to play with context, frame, and expectation. That is all very present in this piece.”

Ostensibly a solo work, Sigourney, who is white, prominently lists a who’s-who of underground performers as collaborators –Maryam Faranz Rostami, Xandra Ibarra with Sophia Wang, Sarah Biscarra-Dilley and Larry Arrington — opening up the work to a multiplicity of voices and influences. I asked him about the project’s origins, and what he hopes will come out of the piece.

“When Zimmerman was aquitted for the murder of Trayvon Martin I was abroad in Europe,” Sigourney told me. “I was watching online  as many people took to the streets holding signs and flashing the hashtag ‘I Am Trayvon Martin.’

“I had many conversations with my brother about the trial, about Trayvon Martin. My brother strongly declared ‘I am NOT Trayvon Martin.’ He started a blog with the same name. To me this was a powerful thing for socially engaged white person  to do, to stand up and call out their own privelage but still remain in solidarity with people of color. (It is unlikely that police violence equivalent to the violence enacted on Trayvon Martin would happen to somone who looks like me or my brother).

“Since I was in Europe I found myself engaged with many people about what race and racism is in America. Sometime around this time, Miley Cyrus twerked in her music video and did that MTV VMA stage performance. This lead to even more conversations with Europeans about race and identity beyond the Zimmerman verdict. 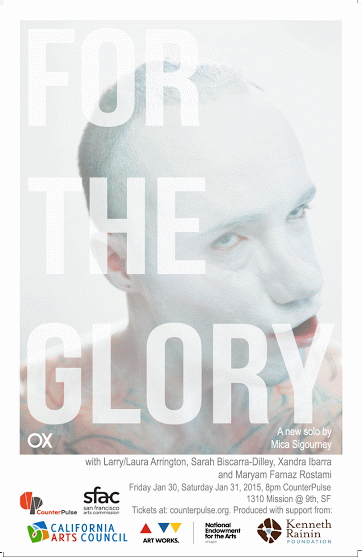 “I was explaining what whiteness in America is to Europeans who are ‘white’ but also in a different system of privilege. So those two events and the subsequent conversations about appropriation, American justice, etc sort of generated this idea for the solo. Which is also about addressing the ‘neutrality’ of the white male body on stage in a dance context.

“In a field [dance] with so many more women than men, as a viewer and performer I notice that culturally the female body on stage seems so much more politicized, it can not get away from its femaleness, while a male body seems….neutral. Also, the idea of making a solo about being white and taking up even more space performatively seems like a big challenge, or rather, I do it all the time being in this body, so doing it on stage in a way that is concious and specific is a a challenge, performatively.

“As for the questions this all might raise for viewers, and what might come out of all this? That’s a complicated question. I don’t have an expectation around that. I am curious to get this work in front of people and see what they say and think. I’ve talked to very few folks about the actual content so I feel a bit like I’m in a crucible.

“My greatest hope is that there are conversations after the performance in the theater and on the way home, whether or not the show is ‘good,’ but more towards what the show attempts to stage. I guess I hope people have a big question: ‘what is that really about?’ And that that question can lead to other places.”