ALL EARS One possible positive about the so-called tech boom? Truly culturally curious newcomers to the Bay Area may have spurred another boom — one in contemporary music. And not just the electronic music kind, as one one might expect of computer geeks (although edgy techno has been doing very well). Fresh, genre-hopping compositions and good ol’ experimental music are having another heyday. Shows by obscure recent composers, diverse ensembles, and longtime apostles of oddball sounds are regularly packed by young people eager to hear the next new thing first.

From the SF Symphony’s recently opened, cavernous Soundbox to performances of Steve Reich by the SF Contemporary Music Players and the SF Conservatory of Music (and supercool, smaller productions from Wild Rumpus, The Living Earth Show, the San Francisco Tape Music Festival, Soundwave, and many, many more), a thirst for complex aural landscapes and beautiful-strange ideas has come upon us to match our current drought.

“Especially over the last couple of years, I think audiences are starting to explore and look for something new,” Annie Phillips, co-director of the thrilling, marathon Switchboard Festival, which takes over Brava Theater Sat/4, told me. “That’s always been a very Bay Area thing, but actually the tech industry boom may have helped a little — everyone’s in a constant pursuit of newness.”

Newness is definitely on the menu on Saturday — the sonic palette ranges from lovely leftfield indie and folky strings to jazz-inflected electronic and full vocal chorus (listen to most of the artists here)  — when Switchboard, also directed by Ryan Brown and Jeff Anderle, features Brass Magic, Kitka, Powerdove,  Black Spirituals, Friction Quartet, Random House, Nathan Clevenger Group, and many more contemporary acts. Honestly, you will hear the world here in eight hours, for only $20 dollars! Get on it.

“Paired with the tech component, I think the music being made is actually more interesting, Phillips told me. “This may be a result of the specific experience I have working in music in San Francisco, but I think there is a new breed of musician who isn’t just schooled in one train of thought. Some of the most creative composers I know never went to school and are totally self-taught, and some of the best noise bands are all classically trained.

“And so those audiences that are starting to explore happen upon these really creative musicians which (hopefully) creates a snowball effect of great music being played to great audiences.”

This is the eighth Switchboard fest. “When Ryan, Jeff, and Jon [Russel] founded the festival in 2007, there wasn’t really anyone else specifically presenting or promoting genre-bending music — the whole idea of mixing several different kinds of music into something new was really unique,” Phillips (a clarinetist who performs this year with the SFCM Clarinet Ensemble) told me.

“Now it’s a lot more common, and I mean that in the best way possible. At first I think they thought they might start to run out of groups, but we continually have a really creative and deep scene here in the Bay Area to draw from.”

Even older composers are getting a makeover. Seminal 1964 experimental piece “In C” by Bay Area legend Terry Riley (often cited as the first major minimalist work) gets a “re-do” as the highlight of the fest.

“I think the most innovative thing about this year is the ‘In C Re-Do,'” Phillips said. “Instead of having a big name in to headline the festival (like last year, when we had the Kronos Quartet), we decided to do a big, community-oriented performance, have everyone from the festival come back onstage, and have other performers and composers we know join in, to feature our scene of musicians as headliner. It’s going to be crazy and awesome.”

Composed in what would today be called an “open format,” Riley’s piece brought an unprecedented freedom to an orchestral work. Built from 53 short compositional phrases called “cells,” musicians and conductors are encouraged to repeat each cell — or stop and start — an arbitrary number of times. It’s a “do what you feel” kind of piece, but with a eerily cogent whole. (A performance in 2000 by the SF Symphony invited the audience to bring their own instruments and play along; I brought a fish-shaped flute from the former Yugoslavia.)

“The ‘In C Re-Do’ came about because the original ‘In C,’ by Terry Riley, had always been on Switchboard’s mind as a potential set, Phillips said. “By nature it’s very all-inclusive, and the way it’s written makes it so that anyone of any genre or level of musical ability can take part.

“So when we were planning this year’s festival, we talked about doing ‘In C,’ since it’s also the 50th anniversary season of that piece. But, we realized it would have been one of the oldest pieces of music we’d ever had on a Switchboard event. As we were talking about it, this idea to start and end with Riley’s original first and last snippets of music, or cells, and invite 51 different composers to each re-write one of the remaining cells, formed in our minds.

“Then we decided we’d do it exquisite corpse-style, so that each composer only saw the two cells before his or hers. We just finished the score and started sending it around to people. One cell has a dinosaur in it (I won’t tell whose!), so a few people have been like, “um…is that supposed to be there?”

“This project is also the first thing I’ve ever ‘officially’ composed for (mine is cell #26), and since I don’t use music notation software it was composed on a post-it note and texted to Ryan, who was compiling the score. Now it’s stuck to the wall above my desk!” 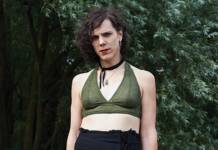