State Assembly Speaker Rendon, who is blocking single-payer health care in the state, has received more than $700,000 in campaign money from the insurance and health-care industry, an analysis by the California Nurses Association shows.

That’s consistent with what I’ve found going over campaign-finance docs, although the CNA folks are a little better than me at identifying health-care companies so they caught a few more than I did. 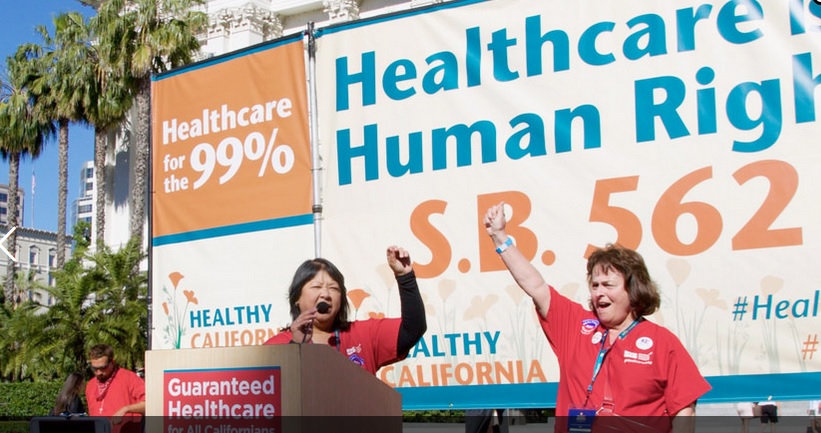 It’s not just Rendon: Democratic leaders in both houses are heavily funded by the insurance industry.

Advocates for SB 562, a bill that would bring single-payer to California, are planning a series of actions to put pressure on Rendon to allow a vote on the bill. He announced last week that it would remain on hold in the Assembly Rules Committee.

A cowardly act, developed in secret without engaging the thousands of Californians who have rallied to enact real health care reform. “Acting in secret in the interests of the profiteering insurance companies late Friday afternoon abandons all those people already threatened by Congress and the Trump administration,” said Deborah Burger, RN and CNA Co-president.

The contrast between what California might be able to do (if the Democrats who control both houses and the governor go along) and what the Republicans are doing in Washington could not be more striking.

The Congressional Budget Office just reported that Trump and the Republicans would leave 22 million people uninsured if their bill passes. It’s a huge transfer of wealth from the poor to the rich, and it would give private insurance companies far more control over people’s lives. (No surprise, the stocks of major health insurance companies have gone up as the GOP has been pushing this.)

So California has a chance to take the opposite approach, and to establish a benchmark for a different approach to health care that could challenge Trump and spread across the nation.

Rendon’s argument – that the bill doesn’t have a funding mechanism – reflects the mainstream Democratic Party’s longtime aversion to telling the truth about health care: That almost all of us would be better off with higher taxes and lower insurance rates. That government can do a better job than the private sector at managing health-care payments. That insurance company and Big Pharma profits and greed are the overwhelming reason that the US healthcare system lags behind the rest of the industrialized world.

There are all sorts of ways to fund single-payer, and all of them involve that nasty word – taxes. But what the corporate Dems have been unwilling to do is say that it’s better to pay $2,000 a year more in taxes than to pay $5,000 to an insurance company.

(And if the taxes were more progressive, most of us would pay even less, and Mark Zuckerberg would pay even more. But he wouldn’t get his name on a building for it.)

People who get insurance from their employers are still paying for it: Money that could go into their wages goes for health care.

The speaker of the Assembly has immense power, and there’s really no way to overrule him. But there are lots of actions in Rendon’s district, and there’s a major event in Sacramento Wednesday/28:

Assembly Democrats are typically resistant to challenging their leader, who can give or take away choice committee assignments, offices, and a lot of other perks. But at some point, our representatives have to call him out.