Todd Kurnat is one of the artists turning emptied out SF streets into colorful galleries.

“It was perfect timing as I was looking for an artist to do the work, knowing the ugliness that boarded-up storefronts have created all over the city overnight,” said Khaled Dajani, owner of Nihon Whiskey Bar in the Mission at 14th and Folsom, citing artist Todd Kurnat aka Inkletterman‘s offer to beautify his marred exterior.

Like most bar and restaurant owners, Dajani is confronting the ruinous economic downturn of the COVID—and since shutting down in March all three of his operations have been tagged with lewd scrawlings from reckless deeds. “Very difficult times when you had sales and overnight it goes to zero,” he said. His exterior was such a hot mess that city resident and illustrator Kurnat, whose studio is just past Nihon, did some research, found an email, and pitched an idea.

“It was a lightbulb moment for me,” said Kurnat, a featured designer in 2017’s Muni Art Project, in which his quirkily anthropomorphized animal renderings were featured on local buses and trains. “I could use my art to help Nihon and the neighborhood by putting some love into this gap that was unintentionally created.” After receiving a message the next morning from Dajani, who loved the idea, Kurnat, got to work.

Vibrant board art has popped up allover the city in the past two months, adorning shuttered businesses from Hayes Valley to the Outer Richmond. Noted artists like Fnnch (whose masked honey bears have become attractions in the Castro and raised $125K for charities) and renowned muralist BiP as well as Art For Civil Discourse’s #PaintTheVoid project (which provides employment for artists) have all produced eye-popping art in a variety of of styles, transforming San Francisco’s once public art-starved landscape into scenes worthy of street art capitals like Valparaíso and Melbourne. 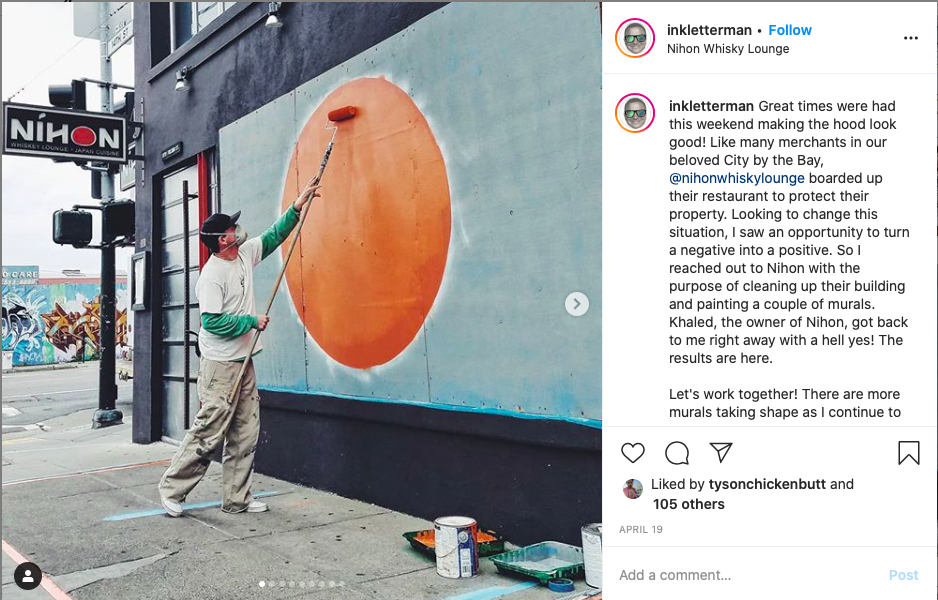 Kurnat’s art is also distinctive. Two bright underwater dwellers with human-like eyes swim across Nihon’s walls, triggering an intuitive calm and well-being. Self-distancing on-lookers pause just for a second, to contemplate the environment. Kurnat is assisted in painting by his five-year-old son Oskar, adding an extra boost of colorful energy. “In my opinion, nature is the greatest artist I know,” Kurnat said. “Her patterns, shapes, colors, personality, and more inspire me endlessly. Some of the most fantastic looking characters are out there in the wild. Ya just gotta look.” These light-hearted commissions—others from Kurnat include Dajani’s Tsunami Panhandle and Bar 821 on Divisadero—give hope in bleak times, according to city officials.

“Visual art in public space can transform our experience of that place and how we think about the community where it’s located” said Rebekah Krell, Acting Director of Cultural Affairs for the San Francisco Arts Commission. “During this crisis, creating artwork on boarded-up businesses beautifies the environment, deters vandalism, and serves as a powerful symbol of hope for a strong recovery.”

Getting to the opposite end of this world health plight, human interaction—connectivity to be direct—will be one of the most priceless commodities we can bring with us into a very different looking future. Sheltering in place and self-isolation, for those who have the luxury to do so, may save physical lives, solitude and loneliness remain inescapable for the living. Those self-sacrificing delivery workers, transit employees, corner store owners, along with nurses and doctors, are in a reality where they can’t choose their own scenario.

It’s a day to day that remains taut. They walk these modified thoroughfares while going to work, contributing to the greater good, at their own increased risk. That’s a different type of solitude encroaching. No matter how many technology-driven 21st Century Zoom meetings or happy hours we attend, public art remains one of the oldest forms of nonverbal communication (from cave drawings on) that still has the ability to inform, comfort, and uplift in a nanosecond.

“Public art beautifies our neighborhoods and can bring a community together even when we are physically apart” said San Francisco Arts Commissioner Suzie Ferras. The City has a long history of public murals, including several Depression-era/New Deal pieces located inside iconic buildings. “Studies show that just seeing art has health benefits including some relief from stress, anxiety, and depression, something that is greatly needed in difficult times like these.

By turning our merchant corridors into vibrant, colorful pop-up art installations, artists are helping alleviate the blight of boarded-up storefronts, and are providing a calming presence in our community. The murals covering the boarded-up windows of our neighborhood shops, bars, and restaurants help keep us hopeful that they will return.”

Kurnat, who started his project over a month ago, through cold-calling, making connections—hustling—in the community, is starting to get requests from businesses, of all sizes, hoping to beautify their storefronts, and uplift visions of the future.