My experience as part of the ongoing SOMArts exhibit, now entering a new phase, pushed me to return to what matters.

Patterns, broken records, recurring nightmares. If humans are creatures of habit, then the habits we embrace and the habits we release speak volumes about our potential to claim hopeful lives—instead of lives filled with havoc. And white supremacy is havoc. It breaks spirits, kills people, and destroys democracies. Still, millions of people in this country voted for a president who began his political career pushing the racist birther movement. A president who most recently told the Proud Boys to “stand by.” A president who scoffs at a pandemic that overwhelmingly kills Black, Latinx, and Indigenous people. I guess old habits do die hard.

Thankfully, Black women in cities like Detroit, Philadelphia, and Atlanta played a tremendous role in pushing the Democrats to recent victory, successfully firing a narcissist from one of the most powerful jobs in the world. This isn’t to say that we are entirely out of harm’s way. I write these words as Black women are both celebrated and vilified for their contributions to the uphill battle for justice. I write these words as commentators like Joy Melody Woods remind us that Black women are not America’s saviors. We wish to survive. Not only that but we wish to thrive as well. When I re-remember what Black women thriving looks like, I am immediately teleported to an exhibit and experience local to the Bay Area: The Black Woman is God.

My first experience with The Black Woman is God, an ongoing art project that “celebrates the Black female presence as the highest spiritual form,” was in 2016. That year’s manifestation of the project was called “Reprogramming the God Code” and featured an array of visual, interdisciplinary depictions of Black women’s divinity.

Curated by Karen Seneferu and Melorra Green, the SOMArts exhibit was pure ceremonial magic. It brimmed with Black folks, individuals dripping in diasporic style. African drums and the murmur of people greeting one another escaped from the gallery space and flowed out onto the patio area. Each piece of the exhibit was fascinating, empowering and broke harmful stereotypes. The memory of that day stayed with me. Seneferu and Green’s curating-expertise inspired my own artistic work for years afterwards. And I think it is safe to say The Black Woman is God has been a springboard for dozens of local Black women artists.

The exhibit still finds a home at SOMArts—now also available as an innovative 3D-mapped virtual gallery— but this year’s iteration opens with a virtual reception Fri/13. The opening event also includes remarks by Mayor London Breed and Dr. Ronoko Rahidi, and participants can enjoy performances by greats such as Bobi Cespedes, Georgia Anne Muldrow, and Zap Mama, among many others.

My involvement in the “God Code”: Cypher Song and Music Video

You can imagine my excitement when Karen Seneferu invited me to be part of the reception opening’s cypher-song and music video. I immediately said yes and was overjoyed to work alongside rappers Coco Peila, RyanNicole, Talia and Shy’An G. Together we wrote eight bar verses over two beats—one by Money Maka and the other by Sar B Child.

The purpose was to hit listeners with quick-scripture, then weave our words together as one. Our song, titled “God Code,” felt like an incantation. As I bumped it on replay, I felt a surge of energy run through my body. Here was a soundtrack to reclaiming our power! Later we took part in an awe-inspiring few days of shooting as director and owner of Fly Media Productions, Renee Moncada, did the work of orchestrating the song’s music video. Her vision spanned over multiple locations, themes, and wardrobe changes—from Afro-antebellum influences and contemporary Oakland street style to studio sessions reminiscent of hip-hop’s golden era. The contrasts provided a window into the diversity of Black womanhood, how our very faces are heirlooms of the queens that came before us.

The music video wouldn’t have been possible without the additional work of collaborators, including Letty Moran, Melhik Hailu, Khamisi Norwood as well as stylists Marie Lueur and makeup artist Martha Haymes. We laughed and told jokes, then got serious with the camera when it was time to perform our song, we even got the chance to ride around in lowrider cars, including a Rose Cutlass, courtesy of Bay Area Classics Car Club.

The song is just one part in an ecosystem of experiences that The Black Woman is God has to offer. And as the past four years have shown, the show involves a multitude of artists of multiple disciplines, not to mention many volunteers. It is a deep and difficult work (and donating to this undertaking is a must).

Visual art lovers can enjoy The Black Woman is God 2020 gallery exhibit both virtually and in person with safety precautions. The exhibit includes the work of Tiffany Conway, whose paintings, as she puts it, “break generational curses.” Conway’s works depict Black women and girls with expressions of power and poise, as if knowing their rightful place as the blueprint for humanity itself. Likewise, Lorraine Bonner creates exquisite sculptures as a way to deal with personal trauma. Her pieces are intricate and expertly crafted. Meanwhile, rapper Mimi Tempest talks back in a bright and vibrant rap video, a testament to Black women as creators of hip hop culture.

As we all settle into a new presidency, I work to revisit why The Black Woman is God pushes me to return to what matters. May we all re-remember that Black women are masterpieces. Not the kind of art that hangs on gallery walls forever, but the kind that lives and breathes and brings hope to humanity. Call it divine intervention.

The Black Woman is God: Reclaim, Reconfigure, Re-Remember is on view at SOMArts Cultural Center through Saturday, December 12 with timed entry ticketing. More info here. You can also view the show online here. A virtual opening reception will be streamed on Fri/13, 3–6pm. 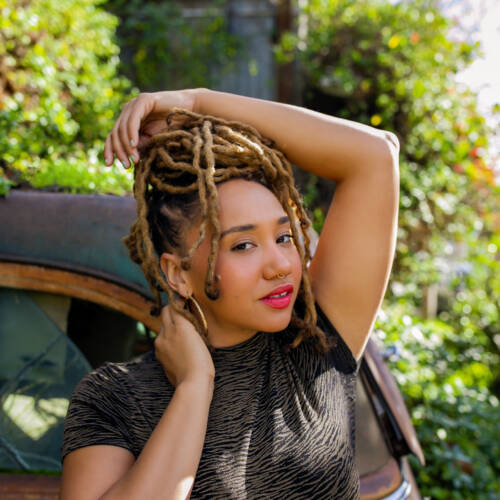 In 'Meet Us Quickly,' artists incarcerated at the site of one of the nation's most deadly COVID-19 reframe their experience in the US prison-industrial complex.
Read more
Art