Most of everything written in the local press about Michael Sam has been supportive, wonderful, just what Bay Area media coverage of the person who could soon be the first openly gay active player in one of the four major US sports ought to be.

I’ve been wondering for years what sport would be the first to break the barrier. Almost the NBA, but Jason Collins never played after he came out. Somehow, and I don’t know why, I always suspected it would be football.

And now – unless NFL homophobia remains at such a level that a talented young player who would almost certainly go high in the draft won’t get a call – it’s likely that a gay football player will join the big leagues next fall. And after nothing happens except that a talented young man helps his team on the field, there will be more.

But I have to say, I was a bit startled, this being 2014 and San Francisco, to see an otherwise intelligent and well-meaning column by sportswriter Bruce Jenkins use a very old and pretty much discredited reference to the gay “lifestyle.” (more after the jump) 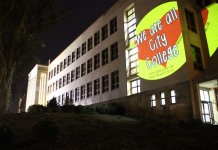