More
UncategorizedNew report shows how the Ellis Act is abused

New report shows how the Ellis Act is abused 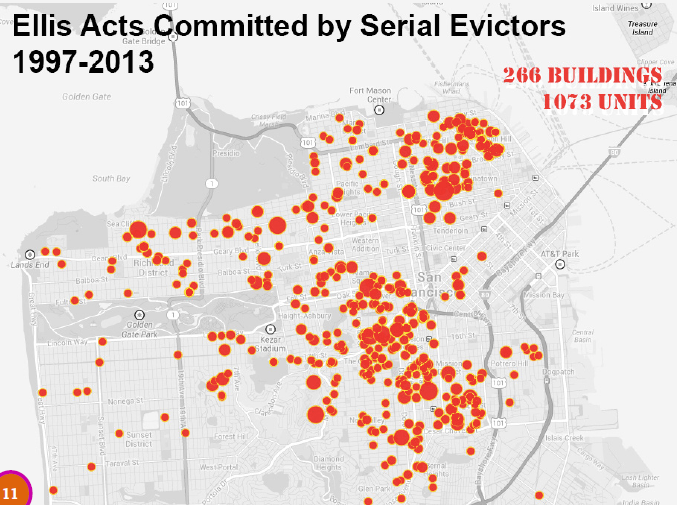 APRIL 3, 2014 — The majority of the Ellis Act evictions in San Francisco conflict with the original intent of the law, a new study by Tenants Together and the Anti-Displacement Mapping Project shows.

The study ought to give a boost to the efforts by State Sen. Mark Leno and Assemblymember Tom Ammiano to amend the state law that has devastated affordable rental housing in this city.

The study shows that more than half of the landlords who filed Ellis Act evictions had owned their property less than a year – and 30 percent of the evictions involved owners who had multiple Ellis Act cases over the years.

The report discusses the history of the law, which was designed to protect the right of a landlord to go out of the rental business. The measure specifically states that it does not limit the right of local government to limit the change in the use of a property – say, from rental housing to condominiums.

In fact, the California Association of Realtors, in a statement endorsing the bill, noted: “SB 505 very fundamentally and simply permits the owner to cease offering property for rent. It does not permit the owner to change the property to another use.”

In other words, under the Ellis Act, landlords who buy property, evict tenants, and turn the units into condos (or tenancies in common) shouldn’t be protected.

But the opposite has happened in San Francisco.

“The timeline of evictions reveals the dominance of speculators in the market,” Tenants Together notes. “The data rebuts claims by Ellis Act proponents that the Act is primarily used by long-time landlords seeking to retire from the rental business.”

It’s hard to argue that a landlord wants to go out of the business if he or she buys a building – and a month later, seeks to evict all the tenants. “Our report removes any doubt that speculator misuse of the Ellis Act is rampant in San Francisco,” the group’s executive director, Dean Preston, said.

In 2013, the report notes, 58 percent of the Ellis Act eviction notices were filed by landlords who had owned the property less than one year. Thirty percent were filed by “serial evictors” – property owners who bought units, Ellised them to “go out of the rental business,” then promptly bought more rental property.

One speculator, Elba Borgen, has used the Ellis Act to empty 27 units since 2001. She bought five buildings between 1997 and 2002, used the eviction law to clear four of them in the next four years – at the same time as she was buying two more properties.

Doesn’t sound like someone who wants to retire from the business of owning rental property.

And that’s what the report really points to: The state law (which many of us would like to repeal anyway) is being abused. This wasn’t the intent of the Leglisature, and the facts on the ground prove it.

The negative consequences of the Ellis Act are clear, including: large scale displacement of tenants. To date, no research or reports have documented what, if any, societal benefit has come from affording property owners a statutory right to exit the rental housing business. According to a website recently launched by the California Apartment Association to fight Ellis Act reform, the Act is needed to allow landlords to “exit the rental market to avoid bankruptcy,”
but no evidence is presented to show this is how the Ellis Act is used. If such evidence were presented, one possible policy reform would be to limit use of the Ellis Act to situations where an owner shows that the Act is needed for the purpose of avoiding bankruptcy. Real estate speculators would likely not be able to meet such a standard.

No: Preserving the Ellis Act is about preserving the right to speculate in property and get rid of tenants protected by rent control in order to change the use of the land and turn rentals into condos.

If that had been the intent of the law, it most likely never would have passed.