John Ross book puts the rebel back in reporting

Journalism needs its outward thinkers, the ones willing to put the voices of the powerless over those of the powerful. And nobody did that better than John Ross.

Writers will find a how-to manual for reporting that challenges the power structure in Rebel Reporting: John Ross Speaks to Independent Journalists. It’s a posthumous compilation of the work of a radical journalist, who often lived and published in the Bay Area (and had a longstanding relationship with the precursor of 48 Hills, the San Francisco Bay Guardian). 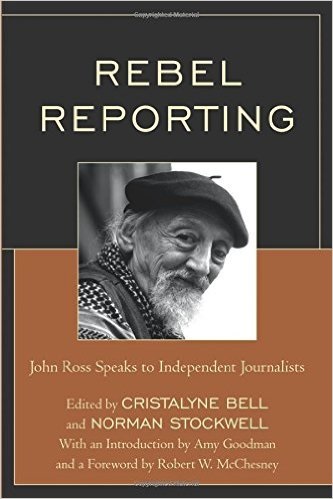 The book is largely comprised of a series of four lectures Ross presented at New College in San Francisco in 2006. These were not professional development pep talks; little of what Ross prescribed would be looked at as above-board by conventional news publications. For example, he had a real hatred for the practice of reporters embedding with governmental forces. “They do publicity blurbs for an invading army,” he commented on his peers who reported on the U.S. invasion of Iraq from the militarized safety of the Green Zone.

His primary directive to the new journalists was: ir al lugar de los hechos, or “go to the place where it happens.” For Ross, that meant the conflict zones in the war of globalization. His watershed moment was reporting on the Zapatista rebellion in 1994 Chiapas, but he also traveled to document governmental repression and civilian resistance in Chile, in the coca fields of Bolivia, in the Occupied Territories of Palestine, in the most corrupt corners of Mexico, and across much of the United States.

As Rebel Reporting makes clear, he considered it entirely ethical – if not essential at times – for journalists to become involved in the issues they covered. Indeed, “Getting the story is not the whole story,” he says in the book’s first lecture, entitled ‘What Are We Doing Here?’ “Acting upon it, bringing it home, comes next.”

In his own life, Ross accompanied a “human shield” delegation from the United States to Baghdad in the days just before it was bombed by U.S. forces. He wore a suit to a 26-day hunger strike against the IMF and World Bank, and lost an eye after being beaten by the San Francisco police during two separate demonstrations.

But he also wrote lyrically from a perspective that seldom appears in mainstream journalism. At the 2003 anti-World Trade Organization protests in Cancun, he watched displaced Korean farmer Lee Kyung-hae stab himself in the neck, wearing a sign that read “WTO Kills Farmers!” He published a story in the Bay Guardian about it, but also a poem called ‘The Three Deaths of Mister Lee,’ which he dutifully recited to the New College audience.

More than anything, Ross’ work serves as a red pill for young journalists brought up on corporate news cycle and ever-merging media companies.

“Rebel reporters say that ‘objectivity’ is an instrument of class oppression, that gives greater voice to the oppressor than the oppressed,” he writes. “Sure, rebel reporters need to know what the oppressor is saying, to dissect it and rip it apart, but we don’t really have all that much time to listen to their lies.”

The book’s other components add context, and important shades of grey where Ross paints black and white. A glowing intro by Amy Goodman of Democracy Now! is joined by a forward by Robert W. McChesney of the Center for Global Studies at the University of Illinois on the history of corporate censorship of journalism in the United States. McChesney posits Ross’ “anti-career” as the upholder of Jeffersonian free press values.

Security warnings are quite sparse among Ross’ gung ho encouragements to drop in on armed conflicts in developing countries. He had no problem risking his life for the story, so a quick “keep your head down,” suffices by way of his own cautionary notes.

This is true even in the investigative epitaph of Brad Will, a “rebel reporter” shot to death by the Oaxacan government while the New College lectures were being delivered.

A section at the back of the book put together by radio journalist Catherine Komp helps to remedy that omission, providing links to organizations that can aide in security like the Society of Professional Journalists in addition to technical pointers and equipment recommendations for those who, like Ross recommends, eschew university journalism courses.

Ten years later Ross’ lectures still inspire, but there are moments when their message rings a little hollow. It would be a disservice to Ross to omit that he’d have some self-examination to do in order to maintain radical relevancy in 2016.

First off, this global cowboy thing — any real rebel reporter must acknowledge that it is not preferable that that a white U.S. writer be the voice that emerges from conflicts involving the world’s 99 percent. English language privilege is real and the fact that you have to speak it to be the international narrator is an injustice.

In certain moments, Ross forgets this privilege and his espoused social values are undercut by personal practice. He names the race of people of color shortly after saying their name for the first time, never stopping to do the same for his white acquaintances. There are uncomfortable qualifiers of women’s beauty in situations where this would appear to be quite beside the point.

But for those who can maintain critical perspective, Rebel Reporting remains an important work.

With the rise of easy publishing platforms and ever more portable cameras, citizen reporting has broken stories of the utmost importance in 2016, including the recent killings by police officers of Philando Castile and Alton Sterling.

Ross honored alternative reporters, like the fallen Will and others like I.F. Stone, but had no time for most “career” journalists, who he always insisted are so easily corrupted by their employers’ bias.

He would no doubt be horrified by the continued homogenization and merger of big media companies in 2016, but our increased access to basic reporting tools like smart phone cameras would have made Ross happy (despite his personal disdain for pretty much any technology beyond the manual typewriter). When it comes to reporting on injustice, he made it clear that a well-informed, motivated global squadron of whistle blowers — who ir al lugar de los hechos but perhaps even better, are already living there — were the only ones who could get the job done right.

You can get a copy of Rebel Reporting here.