The scenes from around the world were stunning. I had expected a large turnout – something on the order of the spring protests against Ronald Reagan – but the Women’s March exceeded anything I’ve seen on the streets by a huge margin. Hundreds of thousands of people, from coast to coast. Fifth Avenue packed.

The quarter million or more in DC more than doubled the record for the most people in an inaugural protest (100,000 against Nixon in 1973) surprised even the organizers. More than half a million in Los Angeles. Events in all 50 states. Overall, this was the biggest outpouring of political action in the streets since the 1960s, and may have been the biggest day of political protest in the nation’s history.

And at the White House, the only comment was that the news media had underreported that number of people at the inauguration, which President (I hate to say this) Trump argued was the largest in history.

Actually, it was a way smaller crowd than the first Obama inauguration, not even in the same league. But truth doesn’t seem to matter anymore. (Trump also told the CIA that the media – “some of the most dishonest people in the world” – had fabricated his “feud” with the intelligence community.

Actually (and I fear we are going to be using that word a lot in the next couple of years) Trump created that feud himself, on Twitter. All the reporters did is quote his tweets.

The scary thing is that a lot of people – and not just Trumpists – will listing to that and say: yeah, the mainstream media is dishonest and can’t be trusted. It’s going to be a problem the next few years; the people who voted for Trump are as critical of the news media as the left used to be, and it’s going to be an ugly world for a while.

It was GW Bush who famously said that “facts are stupid things,” but that’s because he had a little trouble with the language. Trump and his crew, and too many Americans, actually seem to agree.

CNN, of course, tried (and here I am dissing the MSM) to be “objective” by putting on some talking heads who said the rhetoric at the march was “divisive.” Actually, it’s Trump who has been “divisive.” This was remarkably strong and unifying.

But there was an underlying message – and the Democratic Party leadership needs to pay attention. Michael Moore, wearing a San Francisco 49ers cap, noted on CNN that this protest wasn’t just about a Republican in the White House – it was about a Democratic Party that became so linked to corporate America that people lost faith that it could change things.

The fun moment: CNN had to cut off its feed when Madonna took the state in DC and said that if people believe that this March won’t mean anything, then “Fuck You.”

I took BART to the San Francisco March, and I knew the moment that I hit the 24th Street station that something really special was happening.

There was a line up the stairs. The trains were packed. We had to wait about 20 minutes because so many people were getting out a Civic Center that there wasn’t room on the platform for trains to unload.

Credit to BART: Our train operator gave us constant updates, told us exactly what was happening, and kept us informed far better than any airline has ever done when I’ve suffered through delays.

Everyone was headed to the March, and the atmosphere was festive. The Civic Center was packed, so packed that it was hard to hear the speakers. Young women, senior women, and everyone in between, families with little kids, men who supported the women … it was extraordinary. 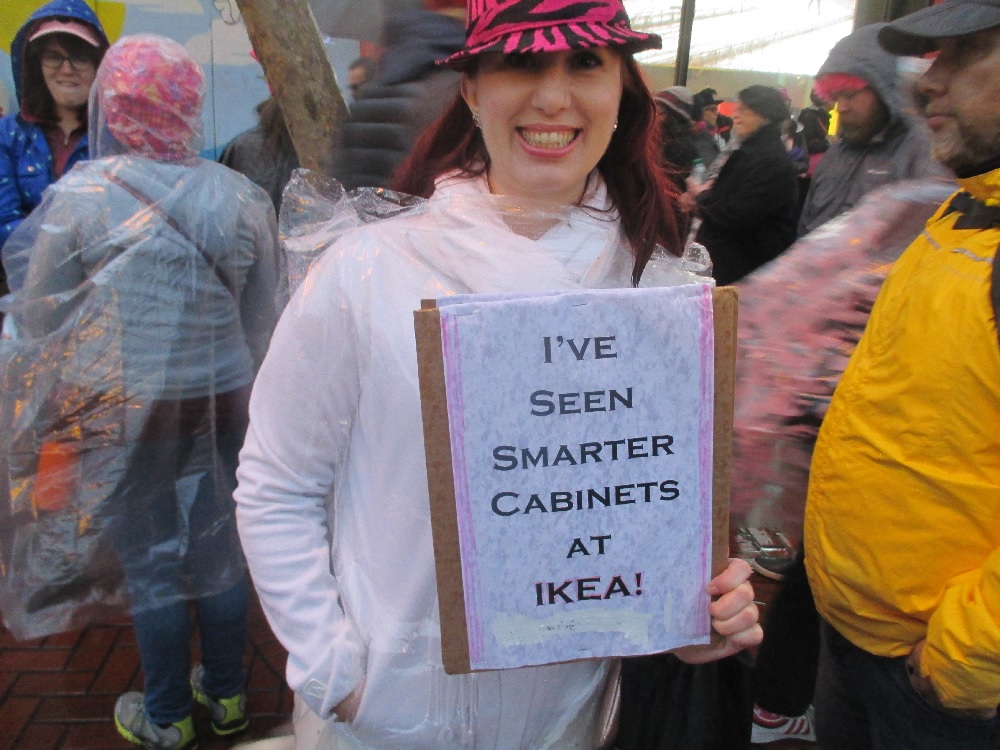 There will be debates about the size of the crowd, but I have watched a lot of big events in San Francisco, and this was one of the biggest. AT&T Park holds 50,000 people, and I’ve been there for a lot of sellouts, and this was significantly bigger than that crowd. And it was raining.

Everyone was not only peaceful but polite. As the rain poured down, people helped each other. 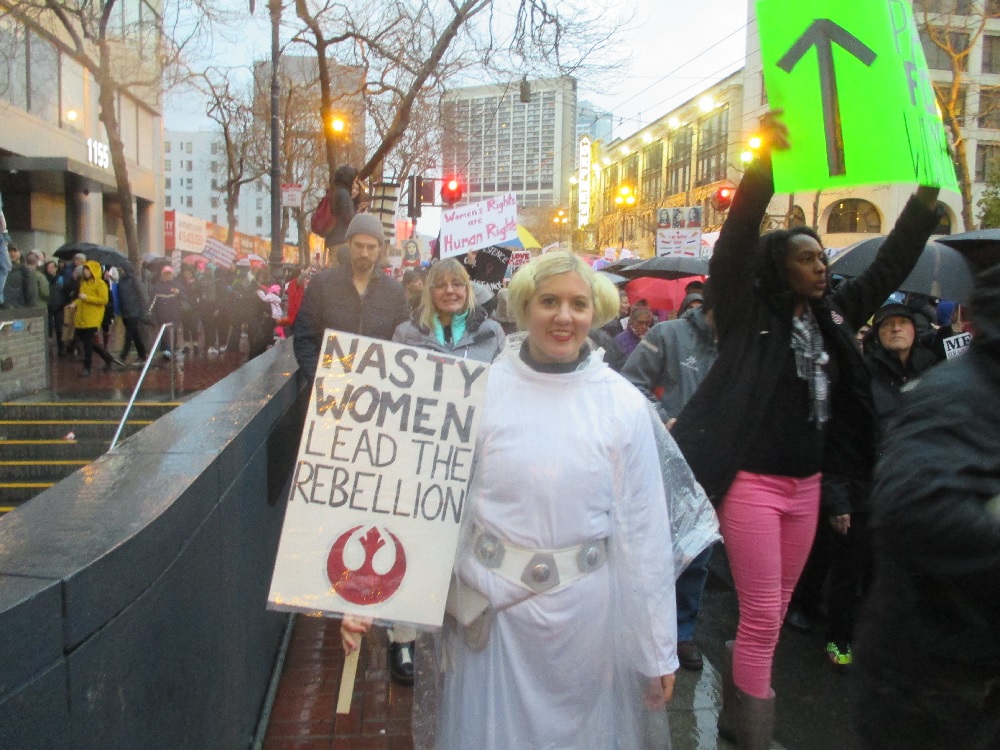 There was anger, but also hope.

Trump will pretend that this hasn’t happened. But the members of Congress have to notice.

As we heard over and over again today, there were no members of Congress at the early anti-war marches of the 1960s. The people were the leaders; the elected officials came along later.

In this case, we had US Senators Elizabeth Warren and Kamala Harris addressing the crowds. Rep. Nancy Pelosi was at the march in San Francisco.

And there will be more. Angela Davis proclaimed today that every day of the next four years will be a day of resistance.

No president of the United States in modern history has taken office with this many people in the streets rejecting his policies. This is historic, don’t doubt it for a second: Nothing like this has happened before.

That sentiment has to turn into political action, and it will.

The people in the streets of San Francisco sent a message to Washington. And City Hall should also be paying attention: The Trump agenda is not welcome here.