“I felt so weird, because I was used to being seen as a sexual person in that space, having a brotherly relationship in that space, rather than as my drag queen self,” Seaman says. “I used to be ashamed when people called me by my drag name or by ‘she’ in a leather bar or bear bar.”

Now, he says, he doesn’t give a shit, but it took some therapy to reconcile his more sexual side—which is to say, his attraction to masculine men—with his feminist politics.

Or, as Seaman puts it, “I healed the rift between my gay side and my queer side.”

After having worked through this thorny dilemma for years, Seaman now presents the fruits of his artistic and emotional labor. #femMASCULINE (at Brava’s Cabaret at Brava Theater Center through October 12), examines the evolution of queer male sexuality from the perspective of someone born in the earliest phase of the millennial generation.

As a high school student during the days when asking “age/sex/loc” was how you met new people in AOL chatrooms, Seaman’s sexual maturation occurred in tandem with the evolution of online dating sites as places of pseudo-enlightened box-checking. Seaman’s gender identity is fluid, and fluidity is—by definition—opposed to fixed categories. Hence, the idea of being “femMasculine,” wherein gender expression isn’t a final destination but a point on a continuing line.

“I wanted people to have to question the process I went through as a young gay boy, having to adapt to what I was seeing around me to be sexually attractive,” he says.

Seaman doesn’t let his own complicity in this confining system go uninterrogated.

“Once I got deeper into it, I realized how many emotions, how much history, and how many blocks I had,” he says, noting that he was initially attracted to bear culture because it allowed him “to be chunky” in an environment otherwise dominated by images of thin or fit bodies. 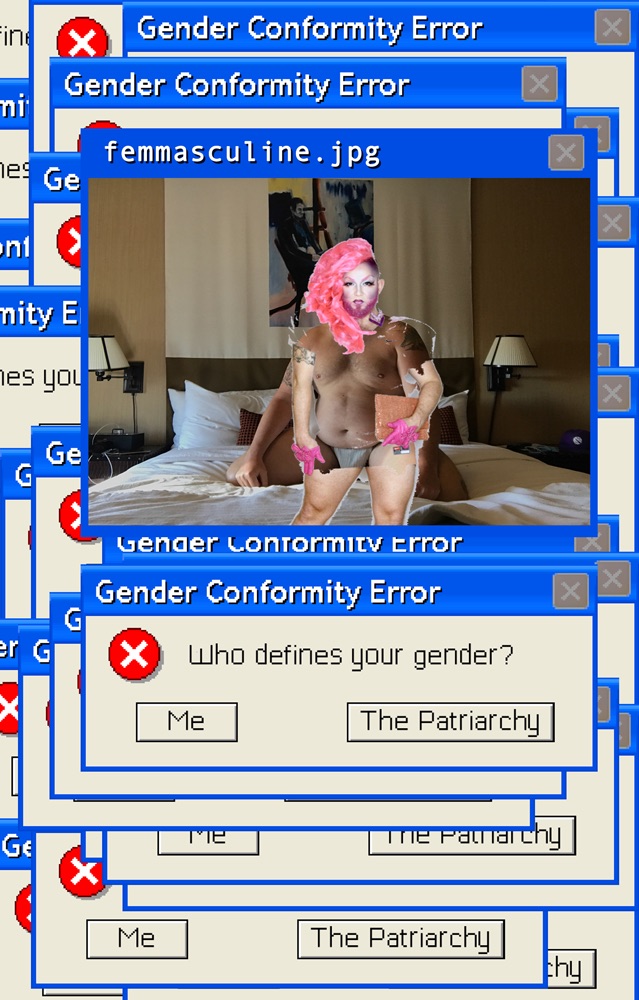 “I am attracted to different aspects of toxic masculinity,” he adds. “Thinking about dating through media portals and thinking about gay porn—which is stripped of all feminism, of setting rules, of consent—what does it mean to set that up knowing it’s a fantasy, but we’re fantasizing about the idea of patriarchy?”

To help audiences along, femMasculine makes use of its own app (developed by Jolene Engo) as well as a section where Seaman makes the audience “do a dial-up internet orchestra with me” as well as log onto AOL chatrooms with closeted suburban dads who want him to mail them his underwear.

“When we’re filling out a profile, you can take a picture,” Seaman says of the app, adding that there are menus with options that “you have to conform to in order to gain access to gay male sexuality.”

As most sexual adults with a smartphone know, we can sometimes throw our pocket supercomputers to the side after becoming aware of just how much time we’ve spent scrolling through undesirable options, or feeling sudden stabs of loneliness amid an ocean of options. That powerful isolation is at the heart of femMasculine’s queries into gender and sexuality — but at the end, there’s a way out of the morass.

“At one point as an artist, I realized you can just make new culture — and I feel like that’s what I want to do in this show,” Seaman says. “Give permission for people to own whatever culture they want to make.”

Screen Grabs: Into ‘The Vast of Night’—beyond