OPINION: Plan Bay Area 2050 is about growth at all costs, including massive displacement, to help the wealthy get even wealthier.

Editor’s note: Plan Bay Area, a joint effort of the Association of Bay Area Governments and the Metropolitan Transportation Commission, is creating a “blueprint” of strategies to guide growth in the region in the next 30 years. Comments were due Monday; here is one of them.

The most important single piece of information iin the thousands of pages of the Plan Bay Area 2040/50 planning process is a chart buried on page 69 of PBA 2040’s deeply buried “Final Equity Analysis Report” Supplemental Report, which is now not any part of the PBA 2050 package:

It tells us that in 2017, when the report was prepared, 32 percent of lower-income households in central-city communities identified as “Communities of Concern” were at risk of displacement.

And – of great and terrible significance – it shows that none of the proposed PBA 2040 Alternatives reduced that risk appreciably, one would make it much worse, and doing nothing would be catastrophic!

Since then MTC and ABAG, which are running the planning process, have done … Nothing.

And the accompanying Map 42 of the Communities of Concern – even further buried all the way back on the second-to-the-last page of this buried Supplemental Report – shows the devastating situation right now. 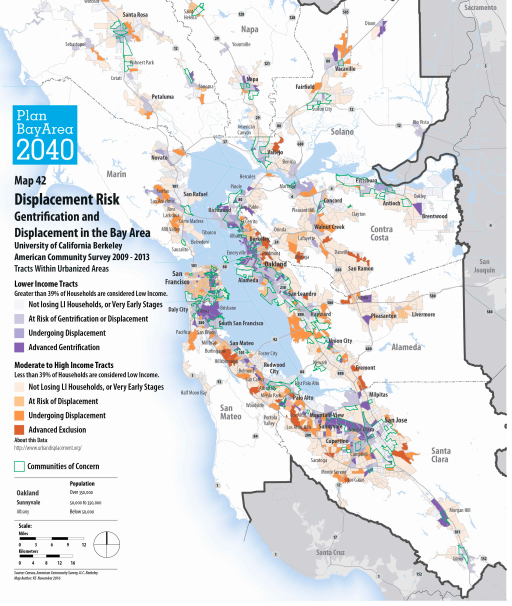 It’s devastating even though, due to some statistical gerrymandering, the definition for “Communities of Concern” already makes them much smaller than the truth. And the definition of “low-income” utilized is an absurdly low “twice the national federal poverty rate” which is itself far below the otherwise-standard definition of 80 percent of SF Bay Area Average Median Household Income. In other words, the situation is far worse than this chart depicts.

None of this concealment of the bitter outcomes of Plan Bay Area for lower income residents is accidental or inadvertent.

There is no mystery at all what the real priority and prime motivation for Plan Bay Area 2040/50 has been and will be: Growth At Any Cost – even the human costs of forced displacement, de facto ethnic cleansing, and cultural genocide of central city communities – to continue to manufacture great wealth for the Elite of the Bay Area and provide for the Professional Class/White Collar Workforce that supports it.

The best counter-measures Plan Bay Area 2040/50 has to offer to reduce such harms are the classic neo-liberal nostrums of utterly inadequate ‘trickle down’ economic benefits via increased public revenues from Growth and – maybe – more funding for affordable housing development through increased sales taxes on the people of the Bay Area – but never the wealth or the properties of the Elite of course!

But in truth this is Government of the Rich, By the Rich, and For the Rich.

There is only one genuine and realistic “Equitable Future” path forward for a “Sustainable Future” for the people of the San Francisco Bay Region:

Our city, our Bay Area, our state, our nation, and our world are all now in the greatest crisis since the end of the Second World War. But today, the enemy is not an Axis or even a virus. The enemy is ourselves – our selfishnesses, our greeds, and our blindnesses that refuse to admit the consequences of our addiction to Growth and instead to put People First before Wealth.

The election was not exactly a massive win for Mayor London Breed and her allies.
Read more
Economy

The Golden Goose is dead

For decades, the city's elite touted downtown development as the savior of SF economy. That era is now officially over.
Read more
News + Politics

The Chron says the city is broken. Now what?

The Establishment paper can't blame the Establishment that has been running SF since the Gold Rush. Are the Powers That Be turning on the mayor?
Read more
Sponsored link