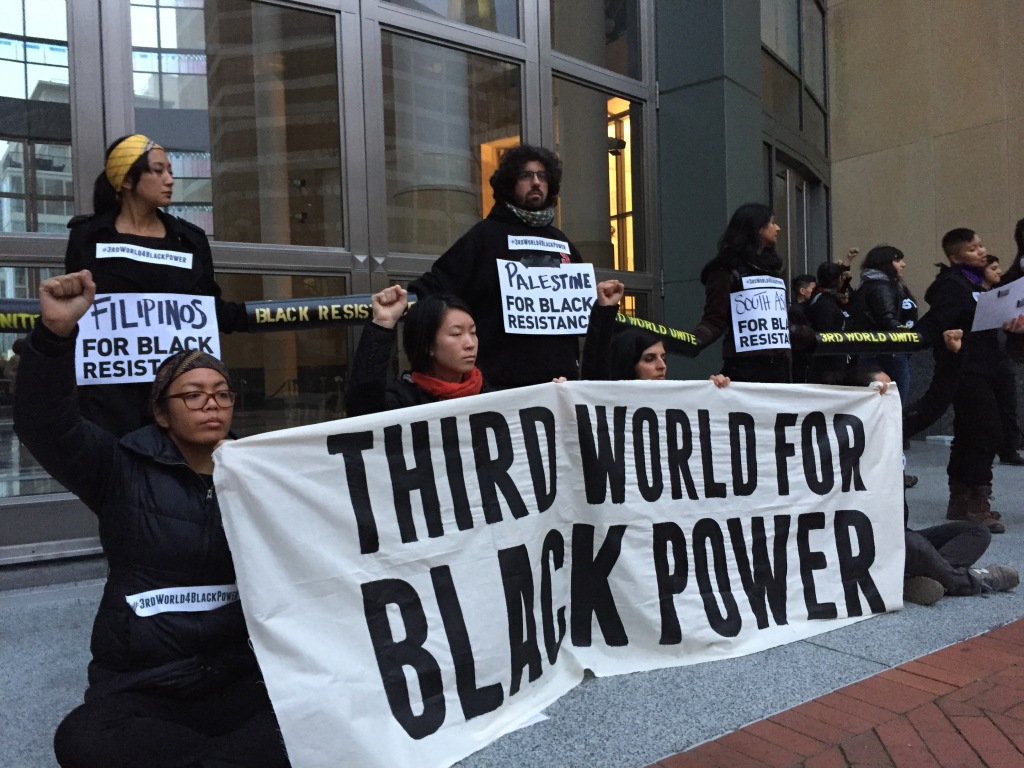 JANUARY 16, 2015 — While protesters banged spoons on BART cars and shut down stations in San Francisco, another action was going on across the Bay.

About 15 protesters from communities of color chained themselves to the Clay Street entrance of Oakland’s Ronald V Dellums Federal Building at 6:30this morning as part of a planned 96 hours of protest in the Bay Area marking Martin Luther King Jr Day.

The protesters, behind a banner reading “Third World For Black Power,” planned to link “third world struggle with black resistance” and emphasize King’s legacy of opposition to US imperialism, including his opposition to the Vietnam War. About 15 more white protesters chained themselves to the Jefferson Street entrance of the Federal Building at the same time. About 100 more protesters gathered in front of the Federal Building, and a helium balloon lofted a giant banner reading “Black Power Matters” above the plaza.

Police did not immediately move to remove the protesters. Other entrances of the building remained unblocked, and police escorted workers into the building. Organizers stated their intention to remain in place for 4 hours and 28 minutes. Four hours symbolizes the amount of time Ferguson, MO police left Mike Brown’s body in the street after he was shot and killed by police last August. Twenty-eight  minutes symbolizes the fact that, according to a study by the Malcolm X Grassroots Movement, a Black person is killed by police, security guards, or vigilantes  every 28 hours in the United States.

The protest made visible the diversity of non-black people of color supporting the #BlackLivesMatter movement that has arisen in the wake of the police killings of Mike Brown, Eric Garner, and other unarmed black men and women. Protesters wore signs identifying themselves as Arab, Filipino, Latino, Korean, Chinese, Palestinian, South Asian, and other ethnicities “for black resistance.”

Rhonda Ramiro, a Filipina activist from Oakland, said that today’s protest shows the connection between the oppression of black people in the US and other people of color. “The wealth accumulated through the enslavement of Black people in the US enabled the US to go around the world and colonize countries like the Philippines,” she said. “We see our struggle for independence as linked 100 percent with the struggle for self-determination for black people.”

Protesters also emphasized the connection between US police tactics, which have the greatest impact on black communities, and the tactics used by police and military forces abroad. According to Ramiro, BART police recently returned to the US from helping to train the Philippine National Police in counter-terrorism. Reem Assil, one of the protesters locked to the building, said that the Israeli Defense Forces have trained US police departments. She linked the tactics used against Palestinians by Israel to the policing of black people in the US.

Assil also pointed to a nexus of solidarity between Muslim and black communities have faced in the US, saying, “As Arabs, we are no strangers to being surveilled and profiled in the post 9/11 world.”

Although it started in tense darkness, as the sun rose and the police declined to remove the protesters, a more festive atmosphere took hold at the Federal Building. Children lead chants, a group of indigenous people performed a spiritual ceremony and dance, and speakers took the mike to give speeches and cheer. Numerous other #BlackLivesMatter protests are planned for the rest of the weekend, culminating in a MLK Day march on Monday starting at the Fruitvale BART station at 11:00am.

At 11:06 AM protesters declared that 4 hours and 28 minutes had elapsed, removed their chains, and concluded the protest

The Housing Element numbers are really funky and don't make sense—and under Breed's Administration, there may be no other option.
Read more
Sponsored link