I ran into Assemblymember David Chiu Sunday morning, outside the union hall where delegates to the state Democratic Party were being chosen. “Welcome,” he said, “to the exercise in democracy.”

You could call it that. Or maybe not.

It was definitely old-school: More than 1,500 people waited in a line that wrapped around the block, in the rain, for the chance to cast a paper ballot for seven men and seven women who would, perhaps, help move the Democratic Party in a new direction.

Except that not everyone waited. Chiu had paid to hire buses – I counted five – to bring in people from around the city, many of them Chinese seniors. Someone apparently told them that there was a separate line for seniors, because they all moved directly to the door, where the people managing the line had no idea that there was a special line for seniors. Maybe there should have been — I don’t like the idea of hundreds of seniors standing for hours in the rain.

And there’s nothing wrong with bringing your supporters to the polls on buses — all sides do this all the time.

Chiu’s folks had slate cards supporting his choices, who included some startling selections who can’t by any stretch be seen as anything other than supporters of the corporate Democrat model that lost the nation to Donald Trump.

Supporters of a Reform Slate were there, too, handing out cards. A lot of them were unhappy about the messy line and the messy situation.

It took almost an hour to get inside the Laborer’s Hall, where another completely disorganized line snaked back and forth.

That, Hene Kelly, who ran the vote in D19, told me that was the way it was supposed to be: “The Democratic Party changed the rules in response to the voter suppression in the South,” she said. “We decided we are going to trust people.”

Voter fraud is, in fact, very rare, and allegations of fraud are typically racist efforts to suppress the vote.

In at least one case I saw, a woman was filling out several ballots at the same time.

The ballots were all in English, and the type was fairly small, so the woman who was filling out several – who refused to give her name – said she had to help her elderly relatives. But she wasn’t helping them vote – she was filling out the ballots for them.

I asked Chiu if that was legal, and he told me, “I have no idea. But the fact is that there were no bilingual ballots.”

I’m all for ballot access, and against any barriers to voting, including ID mandates. The fact that so many people care about the future of the Democratic Party is a wonderful thing. At least twice as many people voted this year as did two years ago.

Fewer people voted in D19 (about 700) and the situation was much more calm — in part because Hene Kelly was running things, and nobody messes with her.

But the situation Sunday morning at the Laborer’s Hall was, to be polite, a clusterfuck. “This is as bad as I’ve seen it,” former Sup. David Campos told me. At the very least, it looked bad.

I walked on to one of the buses and asked the people sitting there what groups they represented. “A lot of different groups,” one person told me. Chiu said it was a “grassroots effort from all over the city.” The money came out of his campaign funds.

At least one of the buses was run by Bauer’s, the company that has such bad labor practices that it’s been banned from running tech shuttles in the city. “I honestly had no idea that somebody hired Bauer’s,” Chiu said.

At around 9:30am, the first bus arrived, carrying several dozen elderly Chinese people. They spoke Cantonese only and got behind the short line that had formed. As a native Cantonese speaker from Hong Kong, I approached them and handed them our slate card, and began telling them about what our slate stands for and how it’s different from David Chiu’s slate. Some of them were afraid to engage and avoided eye contact, but others seemed interested and asked me what the other card was about. I told them that the Chiu’s slate is in favor of building of luxury condos, but as a result, regular people like me, a teacher for kindergarteners and lower elementary school children, can’t afford to live in this city. Our slate is for building housing that’s for the regular people, not just for the rich. One woman even said in Cantonese, “Helping poor people, great! I like it!”, waving our slate card. When they used “I don’t know English” as an excuse to not take my card, I handed them a piece of literature about labor endorsing Keith Ellison for DNC Chair (part of our platform), that was translated into traditional Chinese. A few minutes later as I migrated down the line, I heard a man yelling, “NO! These are our opponents! Don’t look at this card! Use this one!” I saw a younger man in a white button up shirt, snatching our slate cards out of the hands of the elderly and stuffing another piece of white paper into theirs.

Oh, and the window for voting was two and a half hours – 10am to 12:30pm – and while the line moved a little faster at the end, that’s not a lot of time for that many people to vote. 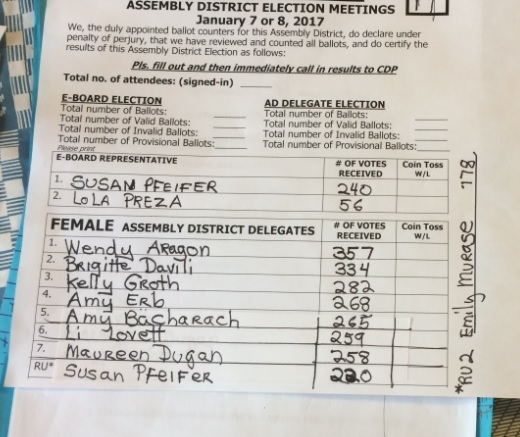 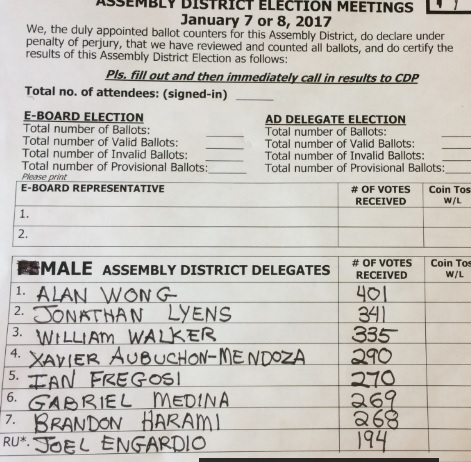 But people walked away in D17 feeling that the process was far from fair. There has to be a better way to do this.

UPDATE: I do want to add that the fact that the Reform Slate did so well, up against the odds, is a tribute to the hard organizing work that the slate members did — and to the clear fact that San Franciscans are sick of the Party Corporatists.