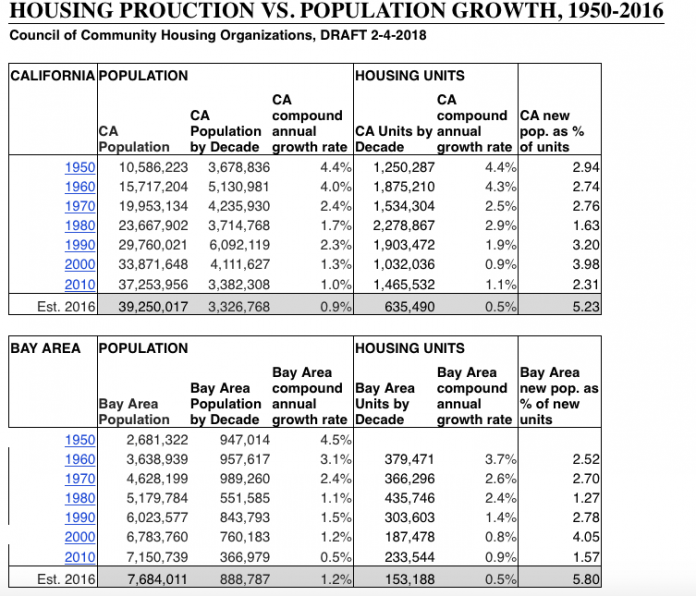 In an interview with Phil Matier on CBS April 1, State Sen. Scott Wiener repeated a line I’ve heard from him, and from many others in politics and the news media, over and over:

This is one of the central pieces of the housing market mythology that defines the debate over SB 827 and the larger question of development policy in the city, the region, and the state.

And when you look at the actual facts, it doesn’t seem to hold up.

Here’s how Fernando Marti, co-director of the Council of Community Housing Organizations, puts it:

We have asked reporters to give the source of the assertion that the state has had “50 years of underproduction,” which gets used over and over as though it is fact, and no one has been able to provide a source.

So we looked at the Census data for the Bay Area, going back to 1950, and guess what we found? Construction was booming 50 years ago, and 40 years ago, and 10 years ago. In fact, units were being produced at a much faster rate than population growth throughout the 50s, 60s and 70s, and again in the 2000s until 2008.

Maybe low-density zoning and Nimbys had something to do with slowing production in the 90s, but then again, it could also be that there was a deep recession in 1990. And how can we explain that those factors seemed to suddenly go away during the construction boom of the 2000s? In the Bay Area, housing production was growing at a rate almost twice as high as population growth. And then, did cities suddenly downzone again in 2008? No, it’s something else…

What the data shows is that, while the rate of production generally tracked population growth, often faster, it crashed in 2008, and even with the booming economy, it hasn’t come back. The sooner we start understanding what’s really been happening since 2008, rather than blaming a fictitious “50 years of underproduction,” the sooner we can get to real solutions that matter.

The same holds true for San Francisco. We haven’t had 50 years of underproduction; in fact, the population of the city fell from 1950 to 1980. Much of that may have been suburban flight (mixed with the displacement of urban renewal), and neither of those factors were anything to be cheered. But the city didn’t “underbuild” because of Nimbys or CEQA or anything else.

The opposite was happening in Santa Clara, Marin, and Alameda counties. But in those counties, too, housing production was keeping up with population growth.

Here’s the data, with sources: 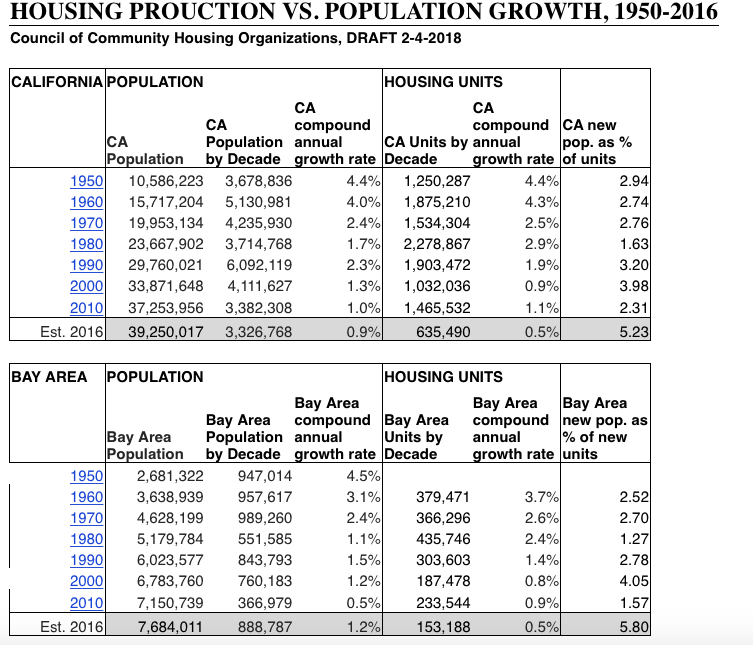 So it’s not “decades of underbuilding” that we’re facing. It’s a decade or two of extreme, unlimited growth in the tech industry driving tens of thousands of workers, who moved here from somewhere else to take jobs, competing for existing housing.

It would have been almost impossible to build housing fast enough to keep up with that demand. That’s why, in the 1980s and 1990s, the people who are getting blamed for the current housing crisis were demanding that the city limit office growth and link it to new housing construction.

The CEQA battles of the 1980s and 1990s weren’t over housing; they were over office buildings, which created a demand for housing that the market wasn’t going to meet – because back then, there was a higher return for developers in office construction than in housing construction.