Dear Santa, Fatman, A Reindeer's Journey and more to keep you warm while you're home for the holidays 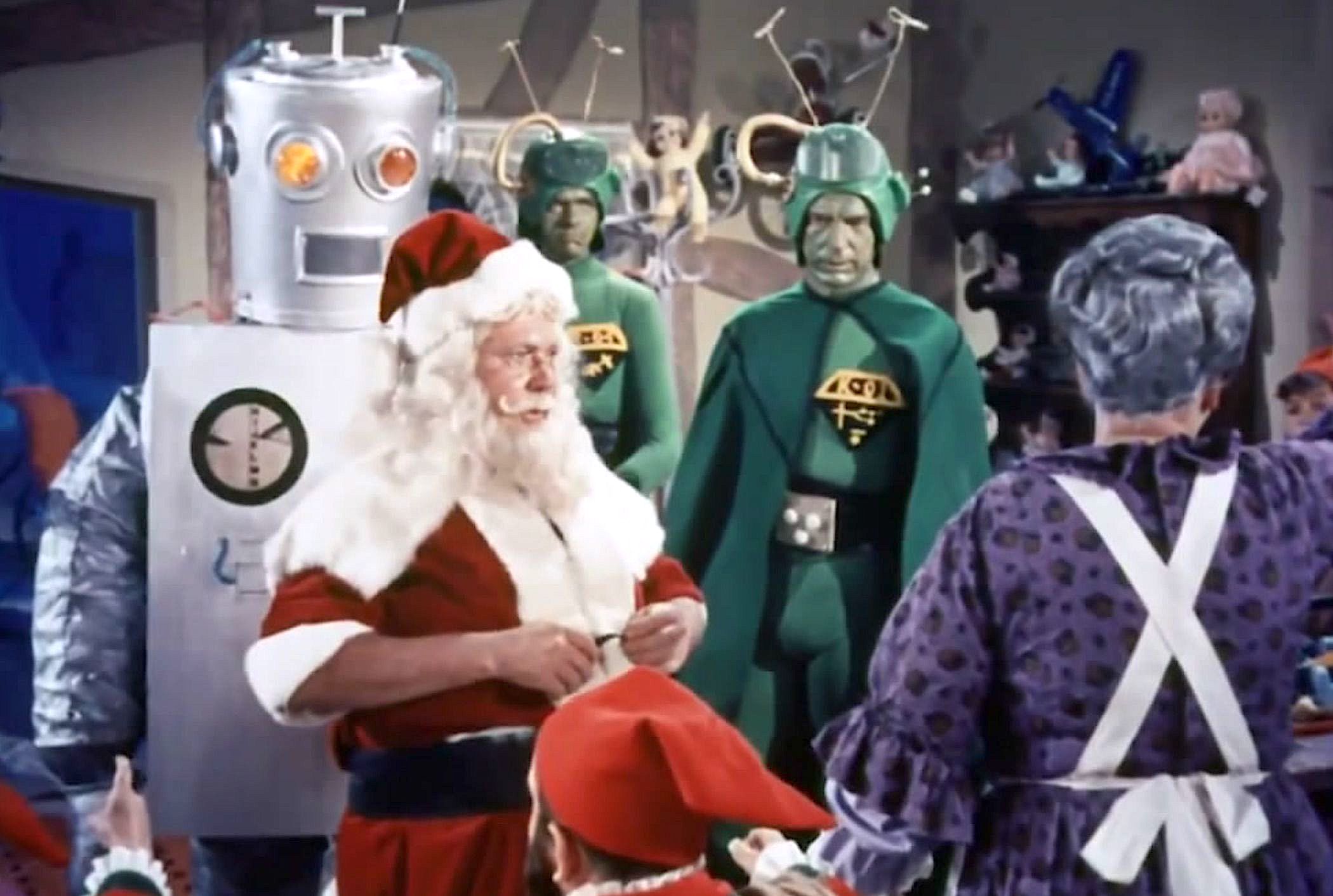 The annual overdose of commercial Yuletide cheer was inevitably somewhat tempered this year by COVID-consciousness. Still, it’s difficult to avoid the stuff no matter how hard you try—especially because these days the hard sell seems to commence not after Thanksgiving but Halloween. Nonetheless, almost everyone succumbs sooner or later, and I suppose the time for this column to surrender, too.

We’ve surveyed a few new holiday entertainments (and one revived old one) that are at least tolerable…though none are likely to make you toss your old copies of A Charlie Brown Christmas or It’s a Wonderful Life onto that Yule log. Some we didn’t quite make it through, including Netflix’s cluttered conglomeration of Christmassy cliches, the musical Jingle Jangle, and Hulu’s Happiest Season, a lesbian romcom that unappealingly dwells mostly on the closet and homophobia. But the features below, if not automatic additions to the canon of seasonal classics, at least aren’t the cinematic equivalent of stocking coal.

Dear Santa
Returning to the child’s-wish-granting terrain of her SF-centric Batkid Begins, Dana Nachman’s new documentary pokes a bit at the eternal question of just where those letters to Santa Claus go. In turns out that the hopefully soon-to-be-no-longer-quite-so-embattled United States Postal Service has that matter well in hand. And part of their dealing with the annual mountain of North Pole-directed mail is something called Operation Santa, a program over 100 years old.

The “elves” who make it work are both USPS staff and an army of volunteers, encompassing church groups, classrooms, businesses and other organizations who “adopt” needy families in response to children’s letters. As we see here, the recipients can range from people who lost their homes in the Paradise fires to the working poor. Often the kids’ written pleas aren’t for themselves, but for their parents, or for basic items like a couch or a crib.

Dear Santa starts with a variety of tots explaining who Santa is, what he does, and what they want from him this year. It ends with a series of happy nationwide deliveries, from a pet puppy or rabbit to a bed and dreamt-of limousine ride. Emphasized is the giving rather than receiving spirit that’s always been the best of the season. This documentary may have limited interest for the youngest viewers, but it is safe for them—there is no demystifying Santa spoilage. It’s currently playing accessible on digital and VOD platforms, as well as at available theaters.

A Reindeer’s Journey
A 1958 French sex farce released at the height of Bardot-mania (though without her onscreen presence) was called Be Beautiful But Shut Up, a sentiment one might apply to this very different French movie, a co-production with Finland. Originally called Ailo’s Journey, it gives that name to a reindeer born in Lapland, whose life from first steps to maturity are portrayed here. Guillaume Maidatchevsky’s film is very much in the old Disney “True-Life Adventures” mode of manipulating nature footage and adding cutesy voiceover to anthropomorphize wild animals.

Frankly, Donald Sutherland’s English-language narration drove me nuts immediately, as did the alternately cloying and bombastic score—two things that constantly undercut the magnificence of the widescreen images. That said, what I couldn’t stand about A Reindeer’s Journey will probably be exactly what sells it to preadolescent viewers. And you can always just shut off the sound and enjoy a beautifully shot film with a lot of wildlife whose purported inner emotional life you can probably do without having explained for you. It’s available for viewing free on streaming service Crackle.

Fatman
For grownups who’d like a distinctly spiked cup of Xmas cheer, there’s this new black comedy in the guise of a pokerfaced action movie. Cranky Chris Cringle (inspired casting for Mel Gibson, who certainly drags a sleighload of personal baggage to the role) runs his elven toy factory and annual gift-delivery operations despite an increasing sense that the world does not deserve such favors. Particularly unworthy is one Billy Wenan (Chance Hurstfield), a horrible mix of Richie Rich and The Bad Seed who compensates for his parental neglect by paying a hitman (Walton Goggins) to settle his petty grudges. When Billy gets a coal in his stocking, Santa—against whom the hired assassin also has a axe to grind—ends up on this monster brat’s “naughty” list.

Writer-directors Eshom and Ian Nelms’ film has a good premise and the right tone, pretending to take its escalating if ludicrous mayhem as seriously as a straight espionage thriller. But for lack of truly inspired ideas, it winds up seeming more mean-spirited than subversive, an over-calculated stab at arch outrageousness. Still, how can you entirely resist the notion of Gibson as grumpy Father Xmas, eventually kicking ass as if he were still in a Lethal Weapon movie?

R-rated, Canadian-produced Fatman is currently available on streaming platforms as well as DVD and Blu-ray. If you’re looking for something in this general vein, you might also try the 2010 Finnish cult favorite Rare Exports: A Christmas Tale, which likewise puts Santa lore through a wringer of grotesque humor, and 2016’s Australian Better Watch Out, a cleverly twisty saga of Christmas Eve home invasion.

Santa Claus Conquers the Martians
Most bad holiday movies and specials disappear quickly, never to surface again. But a few have a stubborn life of their own, becoming camp perennials. In that rarefied sphere, few films loom larger than this still-flabbergasting curio from 1964, whose peak Cold War politics it haplessly amplifies. When Martian siblings Bomar and Girmar happen to see an Earth news report on this year’s seasonal gift-making progress at Santa’s Workshop, they are riveted because they, like all Communist, er, um, I mean Red Planet kids, lead a pretty joyless life: Drugged to sleep each night, fed pills rather than actual food, unaware how to play, or what toys are. Ergo their humorless elders arrive at a natural solution to the problem—Mars will kidnap Santa.

This Pathecolor spectacular, made for just $200,000, was just a blip on the kiddie-matinee horizon before copyright expiration (which allowed it to pass into the public domain) and endless TV showings began attracting a cult following. From its hideous “rock” theme song “Hooray for Santy Claus” to the presence of future camp icon Pia Zadora (as one of the miserable green-faced Martian kids), SCCTM was the terrible gift that wouldn’t stop giving.

I personally prefer 1959’s Mexican monstrosity Santa Claus, in which Saint Nick’s good deeds are undermined by none other than horned, pitchfork-carrying Satan. But choosing one over the other is rather like valuing different nuggets of fool’s gold. While both can be found rather easily on YouTube and other free platforms,  you can benefit CinemaSF by watching Conquers through their Virtual Screening Room (https://www.cinemasf.com/vogue ).

Screen Grabs: Sometimes, a deliciously absurd film is all you need

The squirming abdominals of 'Bloody Hell' joust with Chinese super-production 'Skyfire' and hotel-scare 'Climate of the Hunter' for this week's most ludicrous new release.
Read more
Screen Grabs

'Herself' threads a gentrification tale, while 'Shadow in the Cloud' is 2021's most ludicrous flick so far.
Read more
Screen Grabs

Screen Grabs: 25 great films of 2020, the year we needed movies more than ever

Here's our film critic's best-of, from the redemption of ‘Showgirls’ in 'You Don't Nomi' to masterful turns by the cast of 'Ma Rainey's Black Bottom.'
Read more
Movies

20 Features, 50 shorts, and 30+ programs—including a spotlight on Cuba—help lift us out of winter's depths
Read more
Sponsored link

Mayor who ran as a progressive sides with developer-friendly plan for Adeline Corridor.
Read more
Culture