It sure looked like a campaign rally: A big sign for Ahsha Safai for Supervisor on the front of the building, the mayor on hand to thank Safai for his work, notes from students saying “thank you Ed Lee and Ahsha Safai.”

But the Mayor’s Office insisted that the event this morning at the Mission Child Care Consortium was all about the community, politics wasn’t involved, and the whole thing was about (properly) celebrating the fact that the child-care facility, which serves more than 250 low-income families, is finally going to be able to buy its building.

That’s a huge deal. MCCC is the largest subsidized child-care facility in the city, a critical part of SF’s child-development infrastructure, and a lifeline for working parents.

For the past two years, there’s been an existential threat to the place – the landlord wanted to sell the building, on Mission and Persia in the Excelsior, and if the rent went way up, there were no alternatives. For more than 20 years, MCCC has been using some 25,000 square feet of indoor and outdoor space; there are no affordable alternatives.

The result of any displacement would have been a citywide disaster.

Lots of people have been working to keep that from happening. One of them is Safai, who is running for supervisor in D11. He was, properly, on hand to celebrate a major victory.

Another was Sup. John Avalos, whose staff has also worked to find a way to prevent the displacement of the center. Avalos is supporting Kimberly Alvarenga, who is running against Safai. He’s also the district supervisor for the Excelsior.

He was not invited to the event.

When he showed up anyway, he was allowed in, and only briefly acknowledged, while Safai got a lead speaking slot with the mayor.

I got this message from Avalos:

In September 2014, Safai asked our office to help the MCCC ostensibly because the building was supposedly going on the market. At that time, our office reached out to the MCCC to see how the new Nonprofit Displacement Mitigation Fund (NDMF), which I helped to create and expand for neighborhood arts, could be of help. In FY 2014, there was $4.2 million in the budget for the nonprofit displacement fund, to be used over the course of three years.

Our office connected [MCCC Director] Mr. Martinez and his team with the Northern California Community Loan Fund, which administers the program for the city. We walked MCCC through the application process and then advocated for them with NCCLF. MCCC was accepted into the program and received approximately close to $20,000 worth of technical assistance.

NCCLF’s specialists developed a lengthy and highly detailed facilities plan that includes MCCC’s vision/dreams for programs and financial capacities. The major goal of this document was to figure out how to buy the building – what would be the financial components. The recommendation was to seek multiple public sources as well as private funding. NCCLF advised MCCC how to do a capital campaign and gave them a name of a highly regarded consultant to work with. Meanwhile, MCCC has significant funds in the bank that they have been saving for a down payment.

In order to gather funds for the down payment, our office had multiple meetings with Candace Wong, the director of the Low Income Investment Fund and Michele Rutherford the deputy director of the Office of Early Care and Education. We were able to get LIIF to commit to outright funds and a loan that would go towards the down payment. In addition, based on our intervention, the Mayor’s Office of Housing and Community Development committed funds for the downpayment, and NCCLF committed a loan.

In other words: Ahsha Safai worked tirelessly to save the center. So did the office of Sup. John Avalos. The mayor, who says he is officially neutral in the race, made a point of promoting Safai and ignoring Avalos.

And all of this happened at a nonprofit, community-based organization that is doing amazing work and that shouldn’t be part of anyone’s political agenda. 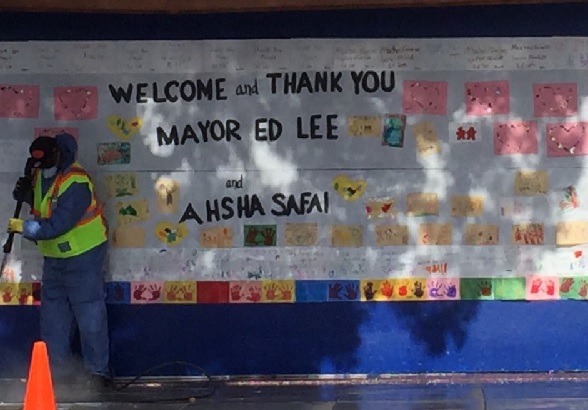 The Department of Public Works was on the scene early, cleaning the sidewalks. Safai rents office space from the landlord at the MCCC, so his sign is in the window. His name was on the “thank you” wall until somebody covered it up.

In his remarks, the mayor talked about how the wealth that the city has created should be shared and how nonprofits should be buying their buildings. His policies have driven up real-estate prices so high that it’s almost impossible for most nonprofits to scrape by, much less buy anything.

Lee has been staying entirely away from the fall election. As far as I can tell, this is the first time in at least 30 years that an incumbent mayor has endorsed nobody and nothing and has been in hiding at a city election.

But it was pretty clear this morning who Ed Lee is supporting in District 11.