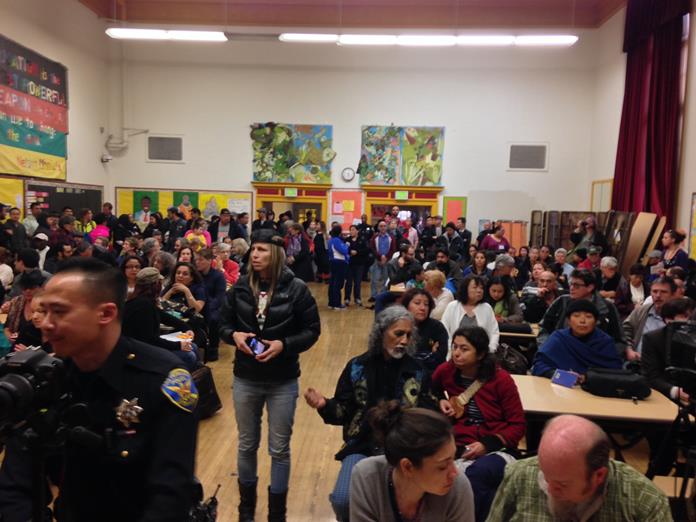 MARCH 27, 2014 — Grief and anger were mirrored in the faces of friends and family members of the 28-year-old Alejandro Nieto, the Bernal Heights man who was allegedly shot more than a dozen times by San Francisco Police Officers on March 21.

As reported by various media outlets, Nieto, a practicing buddhist whom his loved ones describe as a spiritual and kind, was killed in an officer-involved shooting on top of Bernal Hill, after a neighbor reported that the man was carrying a gun and acting “erratically.”

Police later identified the gun as a Taser–Nieto was a security guard at a local nightclub “El Toro,” and licensed to carry the weapon. He was also a student at City College of San Francisco and on a scholarship to study criminal justice.

Nieto was reportedly scheduled to work that night, and eating a burrito on top of Bernal Hill, which overlooks the neighborhood in which he grew up.

What exactly happened on that evening is still unclear, but a sequence of events was presented by Police Chief Greg Suhr at a town hall on Tuesday evening that stretched doe more than four hours. The chief’s ten-minute presentation was repeatedly interrupted by a hollering crowd spilling out of the Leonard R. Flynn Elementary School’s packed cafeteria.

The tension in the room was palpable as nearly a dozen armed police officers lined the room with somber demeanors–causing some community members to accuse them of being apathetic and indifferent to the case.

“Fuck the police!” and “murderer” were a few of the expletives hurled at them by friends and community members of the slain man.

Others present at the meeting spoke out against police brutality, racial profiling, and the problems brought to the community by gentrification, and referenced to racially charged cases such as those of Andy Lopez and Oscar Grant.

“As far as I can remember, there was never a violent execution like the one that the men in black brought to our community on Friday night,” said resident Orlando Galvez. “There was never a killing on that hill until you guys came along.”

Suhr opened with the accounts of a 911 call dispatched at 7:11 p.m. on Friday, reporting a Latino male in a bright red jacket–he was a 49ers fan, friends pointed out knowingly–pacing “back and forth” at the top of Bernal Hill with a black handgun on his hip.

It was this account that turned fatal for Nieto. Suhr moved to another poster board that depicted images of a pistol set in comparison to a yellow Taser–the electroshock weapon that the caller, and the police officers dispatched to the scene, mistook for a gun.

Suhr said that the sun was setting behind Nieto, who had his hands behind his back as the officers “triangulated” around him at a distance of about 75 feet, asking him to show his hands.

“When the officers asked him to show his hands, he drew his Taser from the holster,” said Suhr. “And the officers saw the laser on them, tracking. They believed it to be a firearm–and they fired at Mr. Nieto.”

When asked after the meeting about who drew their weapons first, Suhr said that both Nieto and the officers pulled at the same time.

Sources claim that Nieto was shot 14 times in the body, but Suhr did not confirm this number.

According to Suhr, Nieto did not have a criminal record, but was prohibited from carrying a gun and had a recent restraining order–information that the officers could not have had knowledge of at the time of the encounter.

Carlos “Cookie” Gonzalez, a Mission muralist and a probation officer at Juvenile Hall, who worked with Nieto, spoke to the young man’s character and the need for education and rehabilitation programs among youth.

“If a young person is off track, it is my job to point them in the right direction. Alejandro Nieto wanted to be a probation officer. I met him about 10 years ago through a mutual friend,” said Gonzalez. “I was able to get him an internship with us. He was a criminal justice major. To me it doesn’t add up that he would pull the gun, Taser, and aim it at the officers.”

During public comment, Suhr was confronted with some tough questions from the community.

“What type of warning did they provide to Alex–did they have a loudspeaker of some sort?” asked Benjamin Bac Sierra, his voice shaking with anger. “Did officers approach with weapons drawn?”

“At 7 p.m., it is still daylight outside–so why wouldn’t officers know immediately that (that) does not look like (a gun)?” he added.

Bac Sierra also accused the responding officers of not following firearm protocol by failing to yell “cease fire” before shooting.

Supervisor David Campos had the last word during public comment, and apologized personally to Nieto’s father, Refugio Nieto, for the pain and hardship that the city has caused him and his family. A conversation between the two men ensued, in which the father, for the first time, commented on his son’s death.

“We did not find out until 1:30 p.m. the next day what happened,” he told Campos in Spanish. “They were investigating him and questioning us and not until they were done did they tell us what happened.”

The room went silent as the man spoke about his frustration, and the lack of compassion he received on behalf of the police when notified of his child’s death, bringing tears to the eyes of many, including Campos.

“On behalf of the City, that is really shameful that this is how we treated you,” Campos said. “We need to find out what happened–and we do need an independent, full investigation (of this case).”

Friends and community members of Nieto are planning a protest on March 29 at 2 p.m., to draw attention to brutality and injustices brought to light by Nieto’s case and others at the hands of the police. The protest will start at the Mission Cultural Center.

A version of this story also appears in El Tecolote, the Mission’s bilingual community paper.

If you are older and need to go, the Bay Area is not always a pleasant place.
Read more
Education

Teaching Behind the Mask: Antonia Velegas and Maki Matsunami team up to build bridges and educate young children in a challenging environment.
Read more